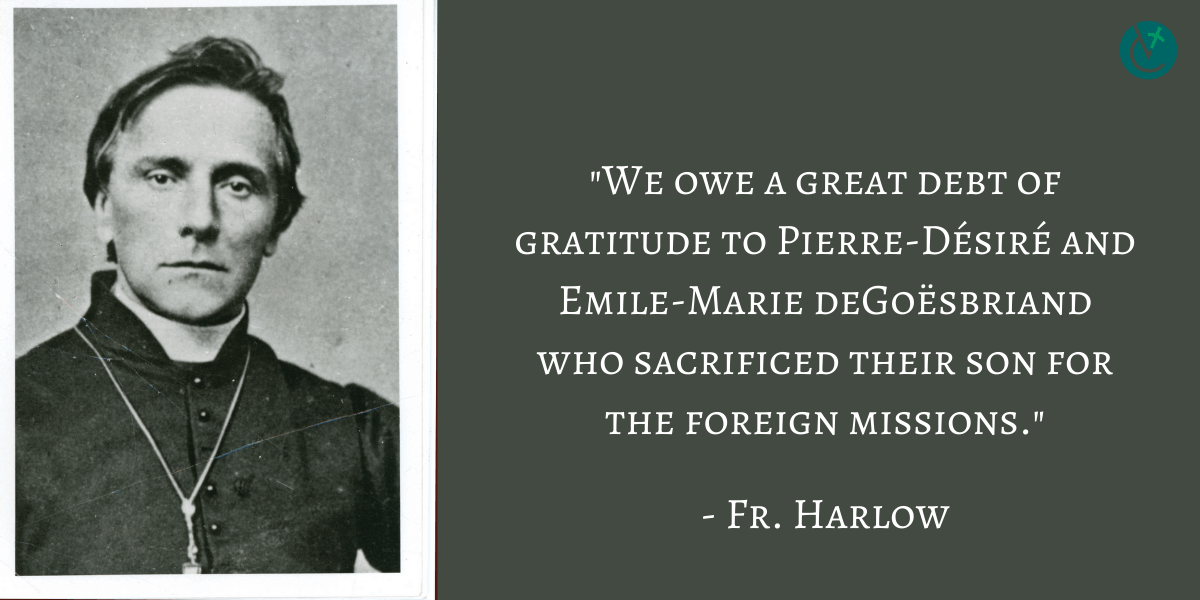 A sacrifice for the ‘foreign missions’

At the age of 11, Louis de Goësbriand entered the minor seminary (grade school) in Quimper, Brittany, France in 1827. When the July Revolution of 1830 erupted, the seminary was confiscated and turned into a barracks, forcing deGoësbriand and some of his classmates to relocate to Pont-Croix. His father, Pierre-Désiré deGoësbriand, the marquis deGoësbriand, was the mayor of St. Urbain, as well as a translator of the fables of La Fontaine into “Breton,” the local dialect in Brittany, France. Pierre-Désiré wanted Louis to pursue a military career like his ancestors, but Louis was torn. He didn’t feel any inclination to be a priest. He didn’t want to be a soldier, and he knew he couldn’t live off the family fortune, because as he said, “Although belonging to an ancient family, we were hardly favored on the side of fortune.” His spiritual director helped him and Louis eventually concluded that, “to work for the salvation of souls was a more noble career than that of solving a strategic puzzle on a battlefield.”

After his first academic year at St. Sulpice in Paris (1838), the seminary welcomed Bishop John Baptist Purcell, a seminary alumnus and bishop of the Diocese of Cincinnati, Ohio. He was on a seminarian recruitment visit for missionaries to help the French-speaking immigrants in Ohio.  Louis volunteered to leave France and to join him in the mission territory of mid-west America.  Both Bishop Purcell and Louis wrote to Bishop de Poulpiquet, the bishop of Quimper, seeking Louis’s release from his Diocese in order to be incardinated into the Diocese of Cincinnati. The bishop refused. Louis was crestfallen and returned to the family manor for his summer vacation.

Upon learning of the difficulty, Pierre-Désiré wrote to Bishop de Poulpiquet supporting his son’s decision:

Our seminarian son, upon his arrival has informed us of an idea which came to him which he considers to be of divine inspiration: that is, to consecrate himself to the foreign missions.  …

Certainly, there is nothing more praiseworthy than to make, in the goal of the salvation of ignorant peoples, the entire sacrifice of oneself, of one’s parents and of one’s country. This would literally be the “Tu sequere me” [John 21:22: you follow me — from Jesus’ command to St. Peter].  And, if such is the special vocation of our son, I don’t believe I would be able to oppose it, but is it not reasonable to test this vocation?

The young man told me that the preparatory studies for the Missions are specialized: a knowledge of the controversy among the Protestant denominations, the study of the major language in the missions. … To that I would reply that the Seminary at St. Sulpice should provide all the possible advantages as concerns polemics, one can study English in Paris in theory, even if it means acquiring a passable pronunciation later … that our seminarian continues his studies in France, and that he receives the priesthood there; nevertheless, I will not oppose him, fearing, in such a serious matter, to oppose the will of God. In any case, Madame deGoësbriand and I, will still do our duty to reimburse the seminary for the excess of the costs Your Lordship will have advanced for his clerical education. For it is in all fairness that an extraordinary expense, made in the special interest of the Diocese, not be diverted from its purpose without compensation.

Please, Monseigneur, kindly accept the new assurance of deep respect with which I have the honor of being, Monseigneur de Poulpiquet, Your Grace, the very humble and obedient servant,

Pierre-Désiré died on May 6, 1853. He never saw his son as a bishop, but he left him an inheritance which helped Bishop Louis deGoësbriand purchase property for the care of his new flock.

We owe a great debt of gratitude to Pierre-Désiré and Emile-Marie deGoësbriand who sacrificed their son for the “foreign missions.”