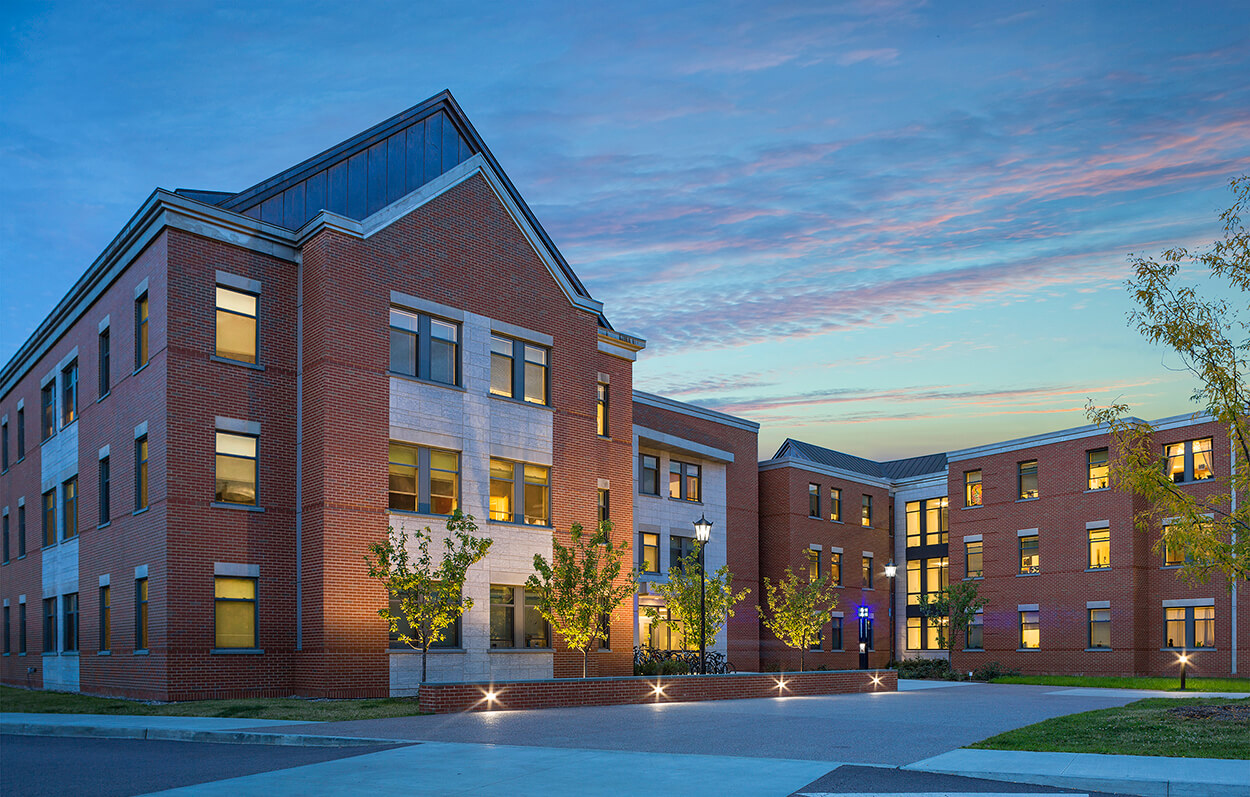 Photo Credit: submitted - This building would be named to honor Father Michael Cronogue at St. Michael’s College in Colchester.

Putting their money where their faith is, the Society of St. Edmund has announced a $500,000 gift to St. Michael’s College, challenging alumni and friends of the college to match those funds for a total gift of $1 million to secure the dedication of an existing-yet-unnamed campus residence hall in honor of the beloved late campus minister, Edmundite Father Michael Cronogue, who died in 2016.

The gift will be used as the cornerstone of St. Michael’s Day of Giving (ThanksGIVING) on Nov. 19.  ThanksGIVING is a time where the St. Michael’s community comes together to support the college and to thank those who made their college experience so meaningful.

The Society of St. Edmund, or “Edmundites,” is the founding order of St. Michael’s. The building in question is the apartment-style hall that for the moment goes simply by “Residence Hall 4,” farthest northeast among the most recent halls Canterbury, Pontigny and Cashman. In announcing the gift to the campus community, St. Michael’s President Lorraine Sterritt stated that the Executive Committee of the Board of Trustees unanimously approved the naming.

“I wholeheartedly thank our dear Edmundite friends for this magnificent gift to the college in memory of such a beloved member of our community,” the president stated, adding that while she had not had the privilege of knowing Father Cronogue, “I have been deeply moved by … the many people who have mentioned him to me in the most loving terms and with heartfelt appreciation for the numerous and selfless ways in which he touched the St. Michael’s community.”

Father Cronogue was a dynamic and popular priest whose death in 2016 at age 68 from an apparent heart attack while working in his campus office was jarring and unexpected. Known to the community as Father Mike, he was the founder of MOVE (Mobilization of Volunteer Efforts), the longtime campus organization for local, domestic and international service work.  By graduation, more than 70 percent of St. Michael’s students participate in MOVE.

During his decades in campus ministry, he worked diligently and generously for peace and social justice, teaching St. Michael’s courses in those fields while touching countless lives with his many small kindnesses, as recounted by many at his 2016 funeral that drew more than 1,000 mourners to the packed chapel. His warmth and humor were well-known and valued widely in the community even beyond campus.

Edmundite Father David Cray, the society’s superior general, explained factors that motivated the gift: “At this particular juncture where the Society of St. Edmund is low in numbers and higher than ever in average and median age, we have as a priority to remain committed to the works that we have established both for their good and to preserve them for our own future involvement; and to preserve and promote our own rich legacy. In view of both those ends, it makes perfect sense for us to have made this leadership gift in support of St. Michael’s Day of Giving.”