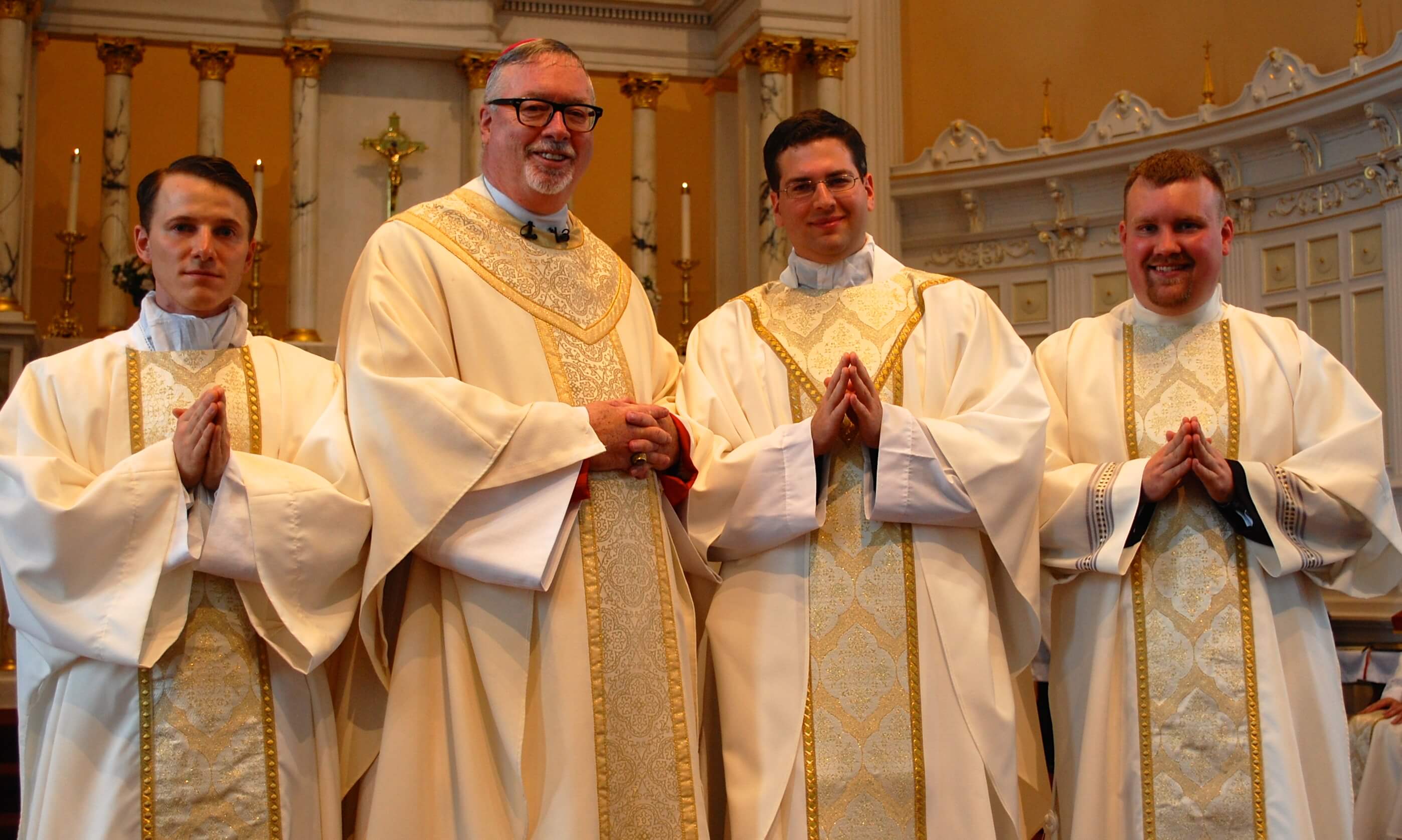 When Deacon Steven Marchand arrived at St. Joseph Cathedral June 16 for his ordination to the priesthood, he visited the choir where he received a congratulatory round of applause. Himself a musician, he was humbled by the reception he received.

When he came downstairs, his reply to the question, “How do you feel?” was “I’m ready.”

Burlington Bishop Christopher Coyne ordained him at a special Mass at St. Joseph Cathedral in Burlington, the first ordination since the former St. Joseph Co-Cathedral was designated the cathedral for the Diocese of Burlington.

The bishop also ordained two men to the transitional diaconate; Deacons Kevin Chalifoux and Robert Little are one step closer to priesthood and anticipate priestly ordination next year.

Bishop Coyne, in his homily at the Solemn Mass of Ordination, told the three men that their ministry would be united with his: to love and serve God’s people in the Diocese of Burlington. “In serving this particular community, we are to first love our people where they are now,” he said. “We are to love them as Christ loves his flock. We are to see and show them how God’s grace is already working in them and help them embrace that grace. We are to recognize the goodness in them and build upon that goodness. We are to love them with all of their imperfections and with all of the messiness of their lives at times. And as servants of the Church we are to accompany them from where they are now on their own unique path to salvation, helping them to grow more deeply in Christ’s love, which flows from the heart of the Church. … But, most especially, we need to do so humbly aware of our own imperfections and our own need to grow in holiness.”

The 2-hour Mass included the Rite of Ordination with a Litany of Supplication in which the Church invokes the intercession of the saints and martyrs in heaven to intercede for the candidate and the entire pilgrim Church on Earth, asking for God to pour forth His grace and mercy. During the litany, the candidates lay prostrate at the foot of the steps in front of the altar.

The bishop then placed his hands on the head of the candidate for ordination. Through this Laying on of Hands by the bishop and the Prayer of Ordination, the Gift of the Holy Spirit for the priestly office was conferred on Father Marchand who received the stole and chasuble, signs of the office of the ministerial priesthood.

In the Handing on of the Book of the Gospels, Father Marchand knelt in front of the bishop who prayed, “Receive the Gospel of Christ, whose herald you have become. Believe what you read, teach what you believe and practice what you teach.”

The bishop anointed his hands with sacred chrism and later placed in his hands the bread and wine – on a paten and in a chalice, respectively — pointing to the new priest’s duty of presiding at the celebration of the Eucharist and of following Christ Crucified.

Leona Marchand of Central Falls, Rhode Island, Father Marchand’s grandmother, said she was “excited God has given me the pleasure of seeing this day.”

He is one of “Memere’s” eight grandchildren, and she said she especially enjoys hearing him play the organ.

After the ordination, Father Marchand bestowed his first priestly blessings of those who lined up and knelt in front of him. After blessing his sister, she kissed his hand.

Father Marchand’s father, Russell, spoke of the many blessings his family had received and called the ordination day “lovely.”

“When (Father Marchand) said ‘yes’ (to becoming a priest), we knew he was right for the job,” Mr. Marchand said.

Father Marchand has been assigned as parochial vicar at St. John Vianney Church in South Burlington.

Click arrows on image (hover mouse over image to see arrows) to scroll through photos from the Ordination Mass.