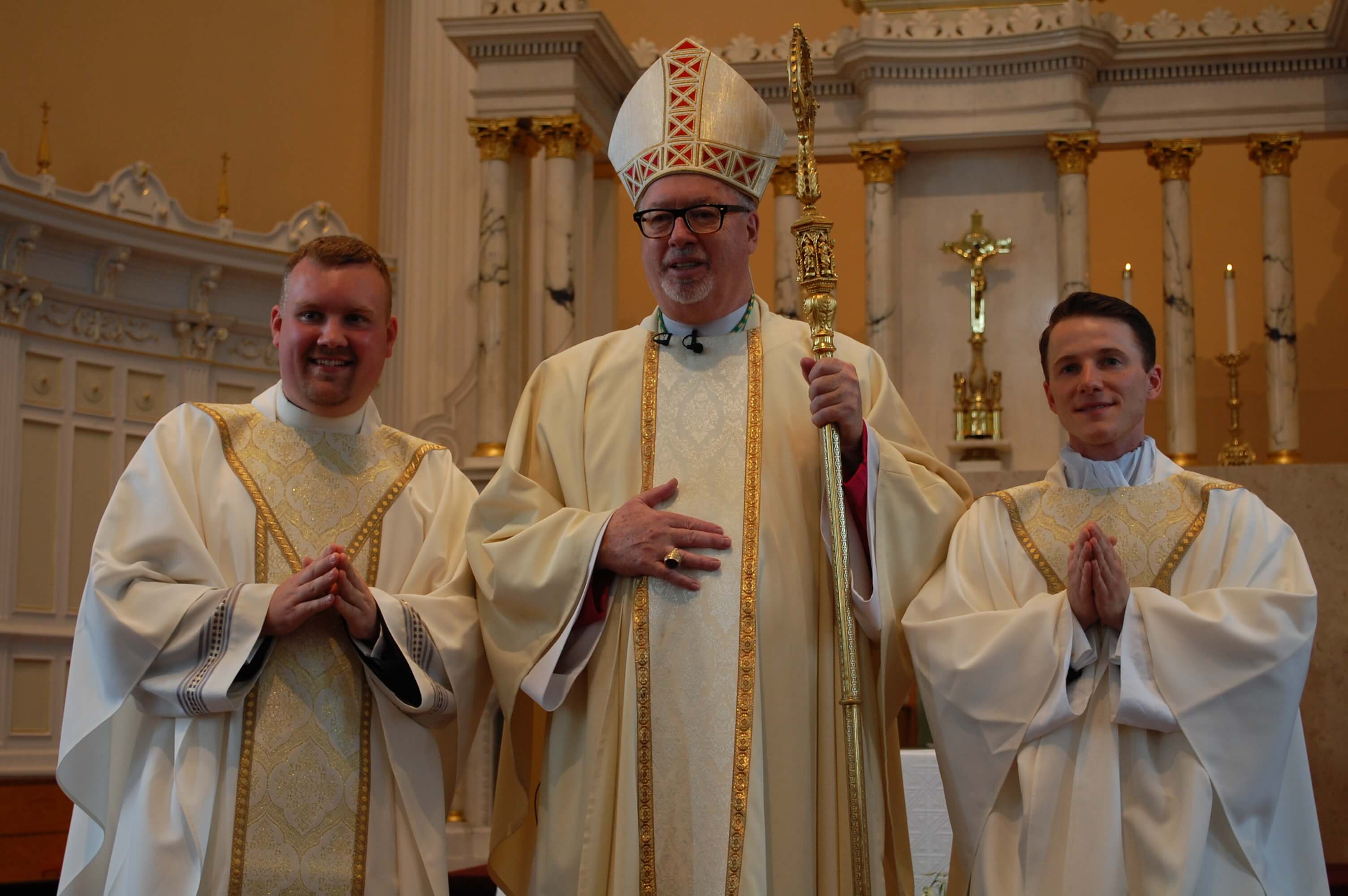 Fathers Kevin Chalifoux and Robert Little were welcomed to the presbyterate by many of the diocesan and religious order priests that serve in Vermont.

In his homily, Bishop Coyne encourage the new priests to serve the Word wisely and worthily especially in the task of preaching. “You are aware as am I and your brother priests that we are no longer an established Church but a missionary Church. The culture landscape we face today is very different than that of even 25 years ago,” he said. “Many people have never been exposed to any faith in God at all. They need to hear the Word of God. Many of those who have heard the Word of God before and have been part of our faith are leaving and they are not coming back.”

The bishop said that if priests are serious about being a missionary Church and carrying out the new evangelization then they must be serious about their ministry to the Word of God: “We must be afire for the Word, enthusiastic about our preaching.  We must see the call to preach the Word of God as a matter of spiritual life and death.”

It is said that the bishop is the chief shepherd of the people of God entrusted to him and that a priest is a sharer in that shepherd’s care. Bishop Coyne told the new priests to give people that shepherd’s care. “When the people of God come to Mass and the sacraments, they are entitled to be fed well. When they walk through the doors of our churches, they are entitled to the Church’s liturgy. When they come to the holy feast of the Mass, they are entitled to be fed with the finest of spiritual foods,” he said. “Feed them not only with the Sacraments of the Church, especially the Eucharist, but also with the Word of God in Scripture, prayer and preaching. Let the Word of God, rich as it is dwell in your hearts so that it may overflow in an abundance of praise and thanksgiving for your own salvation and that of others and may God bless you in the ministry of service that you are undertaking.”

The 2-hour Mass included the Rite of Ordination with a Litany of Supplication in which the Church invokes the intercession of the saints and martyrs in heaven to intercede for the candidates and the entire pilgrim Church on Earth, asking for God to pour forth His grace and mercy. During the litany, the candidates lay prostrate at the foot of the steps in front of the altar.

The bishop then placed his hands on the head of the candidates for ordination. Through this Laying on of Hands by the bishop and the Prayer of Ordination, the Gift of the Holy Spirit for the priestly office was conferred on Fathers Chalifoux and Little who received the stole and chasuble, signs of the office of the ministerial priesthood.

The bishop anointed their hands with sacred chrism and later placed in their hands the bread and wine – on a paten and in a chalice, respectively — pointing to the new priests’ duty of presiding at the celebration of the Eucharist and of following Christ Crucified.

Asked after the Mass what it was like to hear her son speak words of consecration for the first time, Robin Chalifoux replied, “Awe. I feel so blessed.”

Samuel Little, Father Little’s father, said the ordination brought tears to his eyes. “Have you heard him preach? He’s fantastic,” he added.

Dr. William Tortolano, organist emeritus at St. Michael’s College in Colchester, transcribed a piece that a brass quartet for the Mass. His newly published “Majestic Praise” is based on a 14th-century work, “Messe de Notre Dame” by Guillaume de Machaut. “It’s exciting to have this music played” at the cathedral for the ordination, said Tortolano, professor of fine arts at the St. Michael’s for 50 years and founder and first chairman of the department. Machaut was a French poet and musician, admired by contemporaries as a master of French versification and regarded as one of the leading French composers of the Ars Nova musical style of the 14th century.

The late Msgr. John McSweeney’s chalice was gifted to Father Little by the family of the former chancellor of the Diocese of Burlington and former pastor of St. Mark Parish in Burlington. The chalice is to be used at Father Little’s first Mass. “It is truly an honor to receive Msgr. McSweeney’s chalice. He was a good and holy priest of our Diocese for so many years, and I pray that I will be as faithful as he was,” said Father Little who was baptized at St. Mark Church. “To have a chalice with a connection to St. Mark Parish is a great joy.”