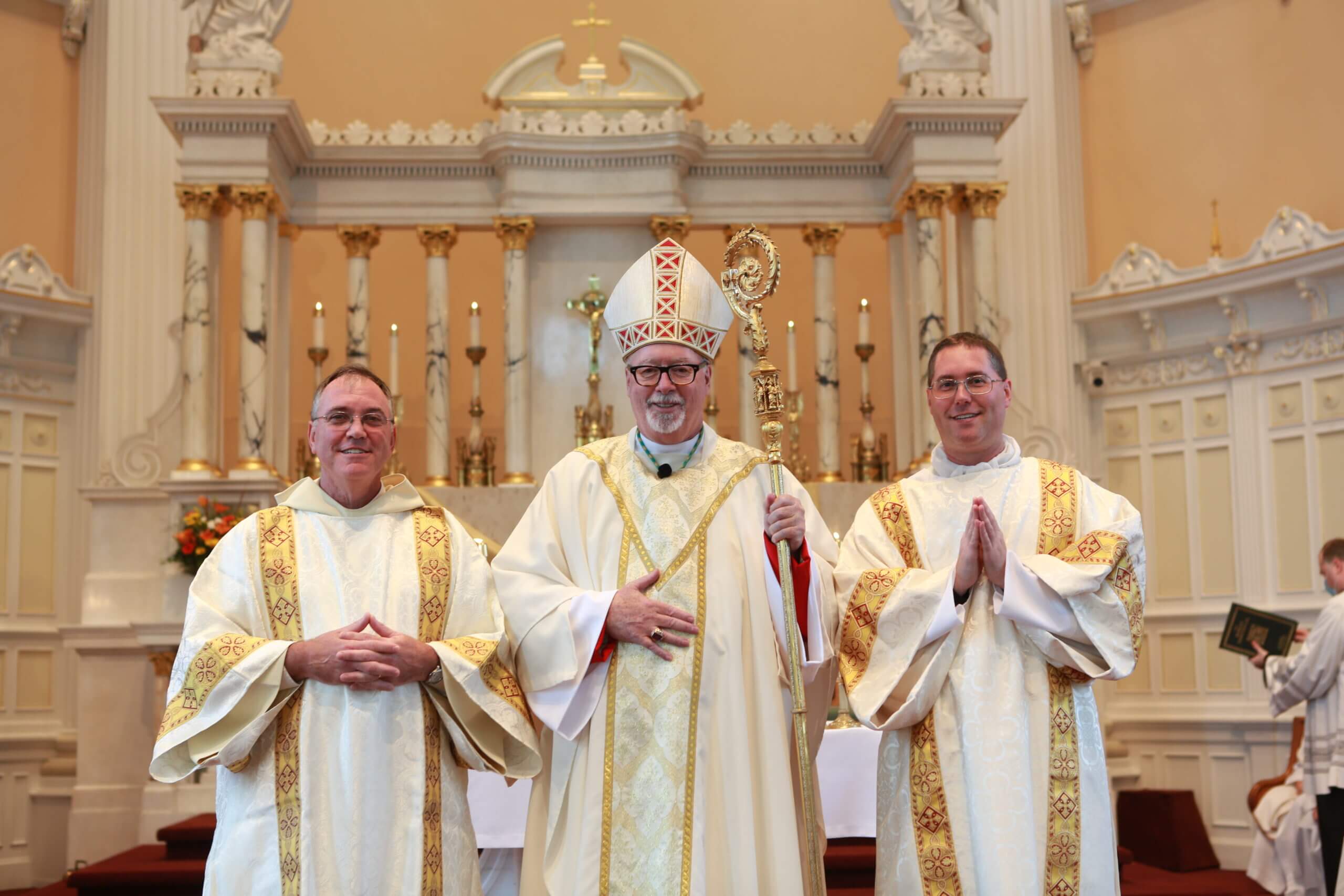 The son of a permanent deacon was ordained to the transitional diaconate at the same Oct. 9 Mass that the newest permanent deacon of the Diocese of Burlington received the Sacrament of Holy Orders.

Brandon Schneider, a seminarian for the Diocese of Burlington and son of Deacon Gesualdo and Loretta Schneider of St. Augustine Parish in Montpelier, was ordained to the transitional diaconate. He is currently serving at Assumption of the Blessed Virgin Mary Parish in Middlebury.

“I find myself in the somewhat unique position of being both totally immersed in the local community and immersed in the faith that Christ gives us through His Church,” said Deacon Knowles, a self-employed carpenter with a woodshop in the Marble Company building in Proctor.

He has been married for 32 years and has four children and two grandchildren.

Deacon Schneider was excited to be ordained to the transitional diaconate. “My pastoral year at St. Joseph Cathedral last year and my time in Middlebury this year have been very fruitful and enjoyable,” he said. “I am blessed to have gotten to know, work with and serve so many wonderful individuals.  I am also looking forward to, God willing, my ordination to the priesthood.”

Both of his parents have been “very supportive of my path, for which I am grateful,” he added.

Deacon Knowles said before his ordination that he was at ease knowing that he was on the correct path, “the one that the Lord has laid before me.”

Without a doubt, Christ has had the most influence on his vocation, but he said his wife “has demonstrated a life of self-sacrifice for the long-term good of others, and that has been greatly influential in my journey.”

The deacon is called to minister in three specific areas: Ministry of the word, ministry of sacrament and ministry of charity. “The deacon’s ministry of charity is the Gospel in action,” Bishop Coyne said during his homily at the ordination Mass, adding that deacons also are called to “impart the living, merciful” word of God to others and to be witnesses to Christ’s saving love.

He said people will want to know if the deacons believe what they read, teach what they believe and practice what they teach. Thus, they must serve the Church with fidelity, love and humility that show the face of Christ.

He called on them to rely on prayer and to walk with others in their joys and sorrows and to impart on them the peace the world cannot give.

During the Mass, Bishop Coyne laid his hands on each of the men to be ordained, and through the laying on of hands and the Prayer of Ordination, the gift of the Holy Spirit for the office of the deacon was conferred on Deacon Knowles and Deacon Schneider.

Each was then invested with the stole and dalmatic. By this investiture, the liturgical ministry they will now fulfill as a deacon was outwardly manifested.