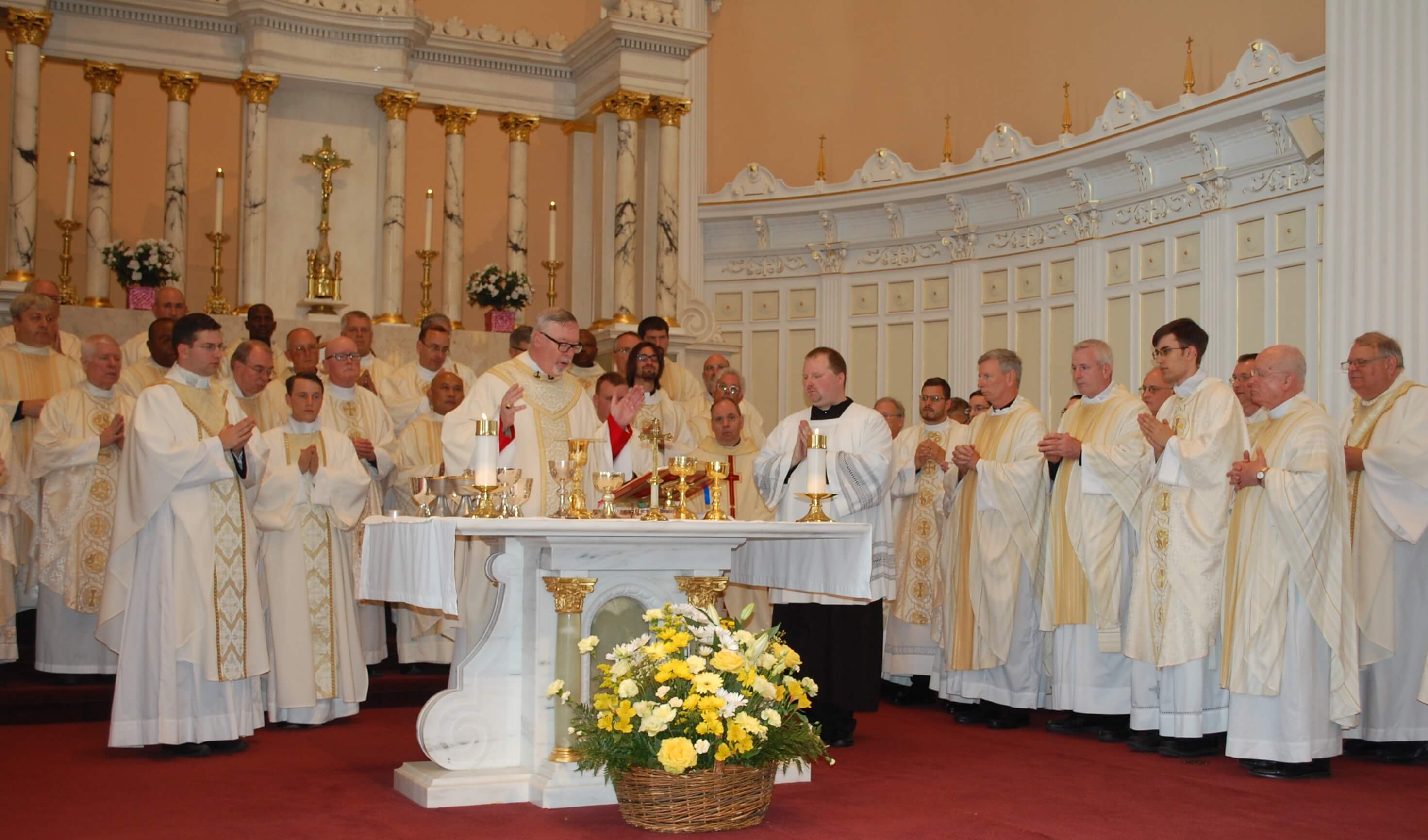 An image from the 2018 ordination Mass on June 16 at St. Joseph Cathedral

I have been a priest for 32 years. The three young men in front of me this day, who have generously sought ordination to the priesthood and ordination to the transitional diaconate, and have subsequently been called by the Church to Holy Orders, are all 26-27 years old. They are very young and I am very … tall.

In 1986, when I was ordained a priest for the Archdiocese of Boston, I was 28 years old. My first assignment was to a suburban parish with two other priests. The pastor, a Monsignor, was 74 years old and the other priest was sixty-five. We had a live-in cook and a live-in housekeeper, both named Mary, both from Ireland, who had been with the pastor for many, many years. Together, they ruled the house and, frankly, much of the parish. I’ll make no more comment about them other than their nickname in the parish was “the Marys.”

The pastor did not believe in Extraordinary Ministers of Holy Communion to help with Communion at Mass so two retired priests, both of whom were in their 80s, stayed at the parish on the weekends and celebrated at least one public Mass. That meant that there were 6 Masses for five priests. As low man on the totem pole, for the first year of my priesthood I pretty much celebrated the same Sunday Mass, the 6:45 AM (unless someone was on vacation or sick). Additionally, all of us were required to distribute Communion at each weekend Mass so I would sit in the rectory, listening to the Mass on a speaker that was run from the church, ready to run over to distribute Holy Communion at the appropriate time.

The pastor’s days off were Monday and Tuesday with his leaving on Sunday afternoon. The senior curate’s days off were Tuesday and Wednesday, with his leaving on Monday afternoon. That meant that I was alone on Tuesday morning, so on Tuesdays I normally celebrated the 6:45 a.m. parish Mass, the 7:30 a.m. convent Mass, and the 9:00 a.m. parish Mass. Mercifully, if there was a funeral that day, there was no convent Mass. We also had nighttime coverage at the local hospital twice a month, usually on Monday night. My days off were Wednesday and Thursday, but I was not allowed to leave until late Wednesday morning because I had to stay around to distribute Communion at the weekly school Mass at 9:00 a.m.

Needless to say, my first year of priesthood was a difficult one. I talked with my spiritual director about what was going on. He listened sympathetically but said, “Look, you have to trust in the Holy Spirit and your vow of obedience. You and I both know you are a very headstrong person. Maybe this is a time to be formed by obedience. Take the high road and see what happens. If you only have the 6:45 a.m. Mass, then feed them the best homily you can. If you have to give out Holy Communion at every Mass, then do it with a smile. If you have to be around for all the Masses, make sure you’re outside the church before and after Mass. If being in the rectory makes you crazy, then get out in the parish at the ball fields, the high school games, the town meeting, and peoples’ homes. And always smile and say, “thank you” to the Marys.”  I know it sounds a lot like “suck it up” and that’s the way I initially heard it and I was not happy with what he said, but I gave it a try. My archbishop had sent me to serve in that parish, with that pastor, and that’s what I was to do. So I tried.

As time went on, the situation in which I found myself did not change, but I changed. In my parish, because I was by far the youngest priest, people related to me more as a son or a brother than a father. Most of the people in the Sodality and the Blue Army and the St. Vincent de Paul Society sort of adopted me as their “son.” I actually began to enjoy the meetings, again, not because the meetings or the people changed, but because I changed. Looking back, I learned two important things. First, that as a priest, I was to serve the people as they needed me, that I could not pick and choose what group or ministry I would or would not serve. If that is where the people were, that is where I needed to be.

Secondly, I learned to walk with people as their brother, one who was ordained, yes, but one who walked next to them, not in front of them. Now, as time has gone on, my place within the Church community has changed and over the years, my priesthood has changed from brother, to elder brother, to father, and now, bishop. But back then, I was, as Jeremiah said, “too young,” to be the elder brother or the Father. I was a priest who was 28 years old and still had a lot of growing to do and the people of my first parish allowed me to do so and helped me to do so. But, I had to allow them to do so. Oh, and by the way, the situation in the parish did become a whole lot better but not because of anything I did. The pastor, surprisingly, retired at the end of my first year. He had been planning his retirement for months but hadn’t told anyone his plans. And just as suddenly, everything changed. Thank you, Holy Spirit!

My brothers, neither I, nor the Church is calling you to blind obedience or a miserable existence in your summer or first assignment. I certainly do not want you to pray for the early retirement of your pastor or supervisor. But I ask you to ponder with me the meaning of the promises you are about to make as you commit yourselves in humble service to the people of God as ordained ministers. Yours will be a ministry united with mine, to love and serve God’s people in the Diocese of Burlington. In serving this particular community, we are to first love our people where they are now. We are to open the wide sheep gate of God’s love and mercy, not a narrow door of judgment. We are to love them as Christ loves his flock. We are to see and show them how God’s grace is already working in them and help them embrace that grace. We need to recognize the goodness in them and build upon that goodness. We are to love them with all of their imperfections and with all of the messiness of their lives. And as servants of the Church we are to accompany them from where they are now on their own unique path to salvation, helping them to grow more deeply in Christ’s love which flows from the heart of the Church. And, most especially, we need to do so humbly aware of our own imperfections and our own need to grow in holiness.

Looking back to my early years of priesthood, I learned the very valuable lesson that we heard in today’s gospel, that to follow Jesus means to serve others. This is true whatever our walk in life, whether I am a lay person, single, married, divorced, widowed, young, old, if we want to follow Jesus, we are called to serve others. This is especially true of one who is called to ordained ministry. Stephen, Robert and Kevin are freely choosing to humbly serve others in the name of Jesus Christ, but in obedience to God’s plan as discerned by the Church. They are no longer free agents, making their own determination in life as to where and in what manner they will serve God. They will now be missioned by the Church, by me, their bishop, to serve the Church and people of Vermont by helping others to know Jesus Christ in the faith of the Catholic Church as they do.

Earlier in the readings, we heard Jeremiah cry out in response to God’s prophetic call, “Ah Lord, I am too young!” But God responds by saying, “Have no fear. I am with you.” My brothers, you are young but have no fear. I, as your bishop, am with you. Your brother priests and deacons are with you. And the people of God are with you. But most importantly, God the Father, Son, and Holy Spirit, is with you.