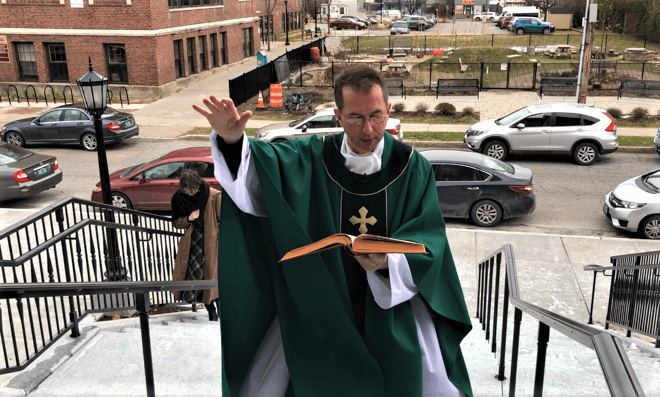 With a congregation of faithful gathered, Father Lance Harlow, rector of the Cathedral of St. Joseph in Burlington, blessed the cathedral’s new stairs and steeple Nov. 10 before the 10 a.m. Mass.

The new stairs were finished and inspected two days earlier, and now are open for use.

Weekend Masses and other parish devotions return to the upstairs main church after using the lower chapel for the last four and a half months.

Father Harlow checked in daily with the many tradespeople on the job site, getting to know them personally, learning about the process and even cooking them breakfast. He said, “It’s my way of evangelizing.”

He noted that the workers labored in the heat of summer and the cold, drenching rain the last week before inspection.

Cranes, excavators and jackhammers made the work easier than when the stairs and steeple were constructed more than 100 years ago, but the same time-honored craftsmanship and dedication went into the latest projects to beautify the cathedral.

The new stairs have a shorter rise making them easier to climb while retaining the red stone facade from the original building. Bushes and flowering shrubs have been added on either side, and the vintage lighting was also restored to keep the historical look.