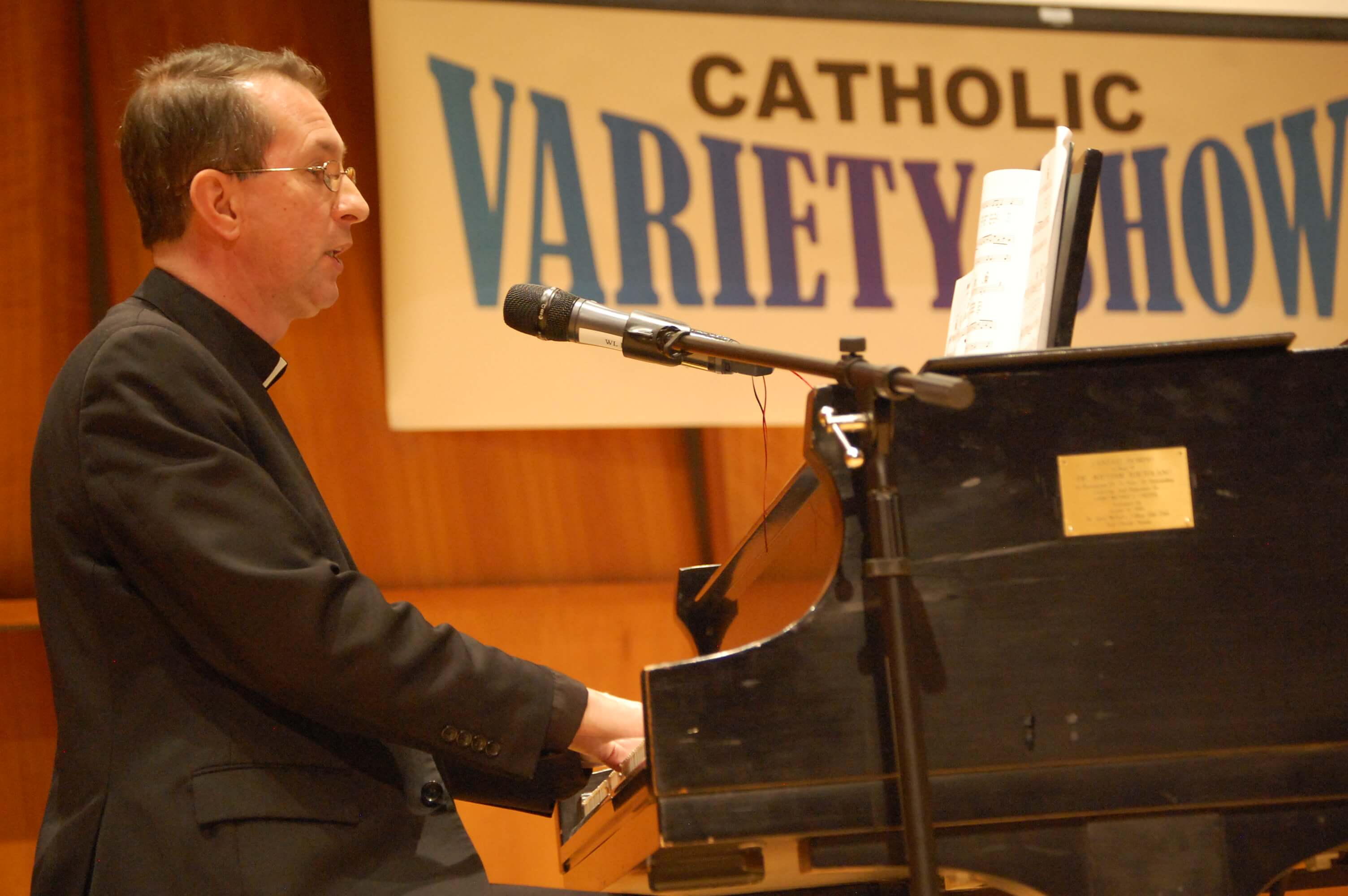 “This is my idea of a fun Friday night,” Lori Limoges said with a big smile during an intermission at the Catholic Variety Show presented Oct. 12 by Challengers for the Catholic Faith.

A parishioner of Maternity of the Blessed Virgin Mary Church in Springfield, she thought it would be fun to attend, and when she learned her pastor, Father Peter Williams, would be doing a comedy routine, “we had to come,” she said, seated in the front row in the McCarthy Arts Center recital hall at St. Michael’s College in Colchester. “He’s an amazing man of God with a wonderful sense of humor that we all adore.”

Indeed Father Williams had his audience laughing throughout his monologue in which he recounted a flight to Florida and the people he met on the plane.

Also performing were Father Timothy Naples, pastor of several parishes in the Northeast Kingdom including Most Holy Trinity in the Barton area. He offered a tutorial on regular patterns of juggling and objects used in juggling including balls and pins and added his own comedy twist.

The emcee for the event was Father Jon Schnobrich, vocations director for the Diocese of Burlington, who, in introducing another priest act, mentioned Dean Martin, Bing Crosby and Frank Sinatra. “They are not here, but we do have Msgr. John McDermott,” he said to the delight of the audience.

The vicar general of the Diocese of Burlington who is also pastor of Christ the King/St. Anthony Parish in Burlington, sang two show tunes: “On the Street Where You Live” and “Bring Him Home.”

Father Lance Harlow, rector of St. Joseph Cathedral Parish in Burlington, concluded the evening, playing the piano and singing “Both Sides Now” and “The Sound of Music.”

Throughout the 2 ½-hour event singer-songwriter Tori Harper sang and played guitar. She is currently working on her first full-length album.

According to Lucy Bathalon, a spokesperson for the Challengers, the purpose of the event was to bring Catholics together for a fun evening and to raise funds for support for seminarians.

This was the second annual event.

Having the priests share their talents was a way to showcase those talents and for them to be used for the benefit of Vermont’s future priests.

“They are definitely a crowd pleaser,” she said of the priest-performers.

One of the seminarians for the Diocese of Burlington, Giang Vu, attended the concert and said it made him happy to see the outpouring of support for seminarians. “I feel very, very good,” he said.

Msgr. McDermott said he remembers the support he received when he was a seminarian, so he was glad to lend his talent to the variety show to benefit today’s seminarians. “We’re doing all we can to support” the seminarians, he said. “I love to sing. I like theater. I like performing.”

“Supporting the seminarians like this is wonderful,” said Limoges, of Springfield, who attended with her best friend and her parents. “It’s impressive to see the many talents of the priests in our Diocese.”

For more information on the Challengers for the Catholic Faith, go to VTChallengers.org.