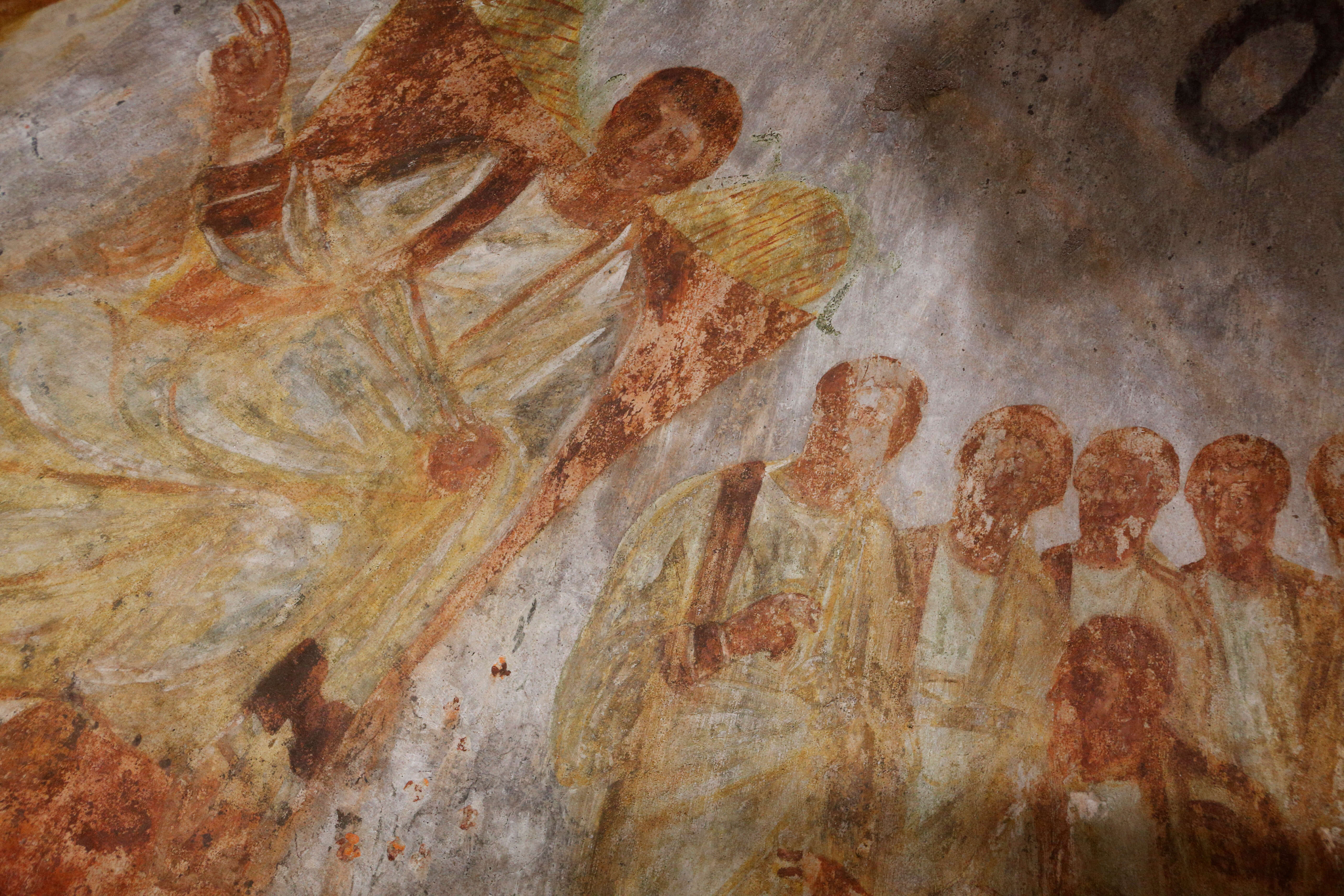 Photo Credit: CNS/Carol Glatz - Jesus is seated on a throne with his disciples at his side in this fresco seen during the unveiling of two restored burial chambers in the Christian catacombs of St. Domitilla in Rome.

Each year on Nov. 1, the Church celebrates the Solemnity of All Saints. That celebration is a formal acknowledgement by the Church that there are vastly more saints in heaven who are not canonized than canonized saints alone. It is only the extraordinary saint who is canonized; canonized saints are said to have shown “heroic virtue” during their lives.

But that does not leave out the rest of us. Each is called to be a true disciple and to grow progressively in knowledge, love and service of God and neighbor. In short, we are each called to holiness in this life so that we may experience the fullness of holiness in the life to come.

At this point, I will introduce three closely related topics: discipleship, sharing the Good News and works of charity.

The first instruction Jesus gave His disciples, “Come, follow me.” When asked where He was staying, He responded, “Come and see.” He also told Peter and Andrew, “Come with me, and I will make you fishers of men.”

This call to discipleship was repeated numerous times in the gospel and countless times since then. The exact words of the call vary, but the call is the same.

To understand the call to discipleship, we need to understand what the term “disciple” means, especially as it would have been understood in New Testament times. It has several meanings: student, follower, apprentice. Very clearly there is a teacher-student relationship between Jesus and His disciples. And there is no question about the fact that the disciples are following Jesus all through Galilee and to Jerusalem and hoping to follow His instructions and commands; although they follow Him imperfectly, they are trying.

Finally, the word disciple also has connotations of an “apprentice.” The apostles served an apprenticeship with Jesus in which He gave them some of the work to do. He had them facilitate the feeding of the multitude. He sent them on missions to other towns and villages. He had them go ahead of him to announce that He was coming to a town. He sent them out to preach, heal and teach on His behalf.

Among the teachings of Jesus is the matter of justice in all its dimensions. He realized that the temple establishment exploited His own Jewish people; that the wealthy exploited the poor; that Rome oppressed the people. The concern Jesus had for the poor and the exploited was a continuation of the long tradition from the Old Testament prophets.

Jesus also sent His disciples out to preach the Good News and to teach in the various towns in Israel and to continue His ministry of healing the sick and casting out demons.

There was also a mission on which Jesus sent 72 out to preach. This clearly represented a much wider portion of the community. Hence, evangelization properly belongs not just to the clergy but to all of us.

We often make a distinction between works of charity and evangelization. But I prefer to think of these efforts more in terms of “two sides of one coin.” Ponder the Corporal Works of Mercy and the Spiritual Works of Mercy. Then, consider the people doing these acts of charity in your own parish. They are not only disciples of Jesus, but they are also sharing the Good News. The Good News includes both eternal life in Christ, but also healing, comfort and support brought by Jesus through His Mystical Body, the Church. In addition, charity done in the name of Jesus always evangelizes.

Jesus told us to “remain in my word.” Certainly, we need to read and pray with the scriptures. But we also need to live the Gospel in ordinary, mundane acts liberating our neighbors from the isolation and poverty they live in, whether that poverty is material or spiritual.

In performing our ministry, we put our own natural skills at the disposal of the Holy Spirit who is in charge throughout. And we come to know the truth, and the truth will set us free. It is our path to sainthood.

—Deacon Pete Gummere is diaconate director for the Diocese of Burlington and serves at Corpus Christi Parish in St Johnsbury. He is adjunct faculty at Pontifical College Josephinum and at St. Therese Digital Academy.