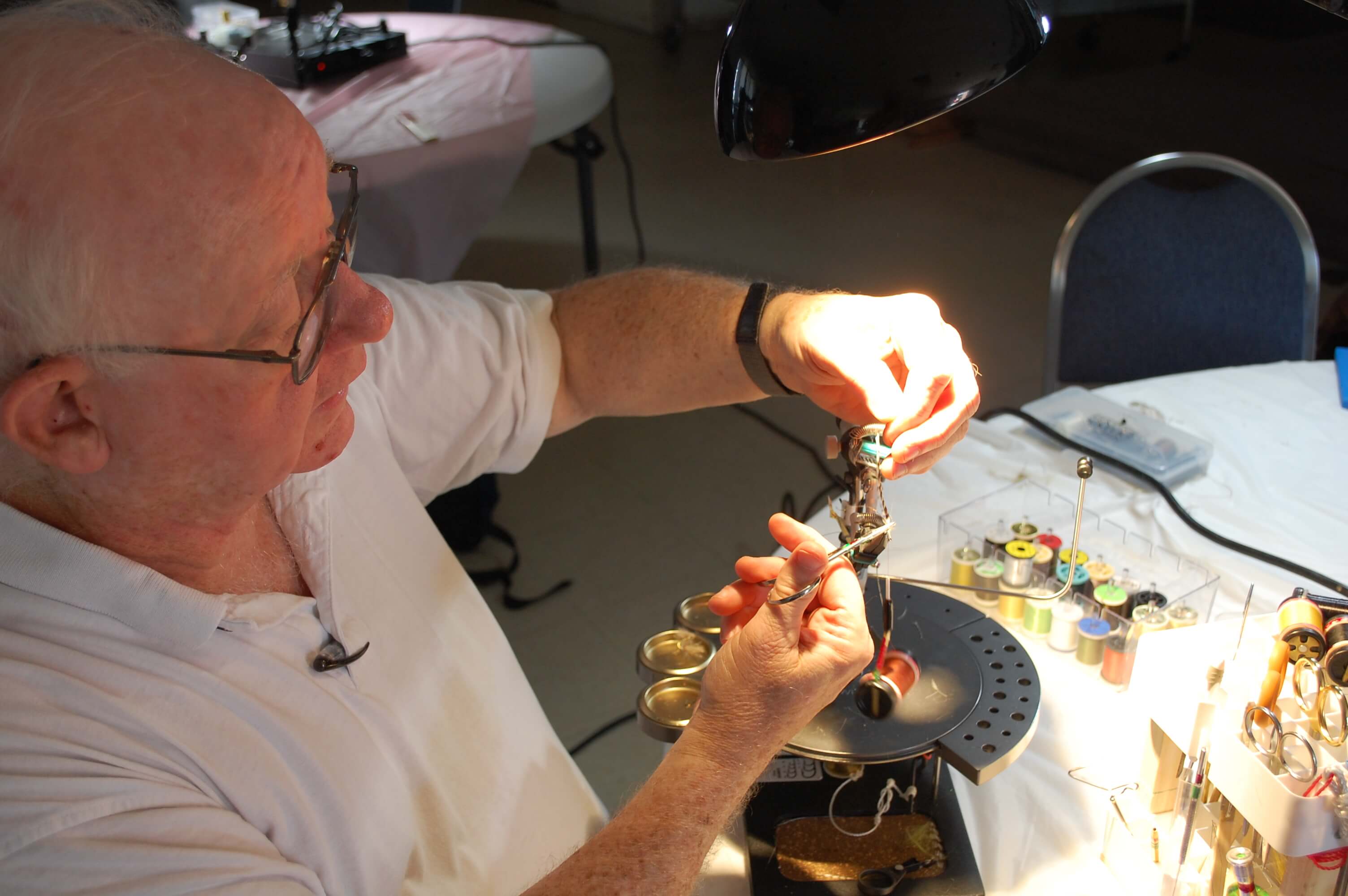 The Veterans of Foreign Wars hall in Burlington was quiet on a steamy summer day, except for the sound of a fan and occasional banter among the veterans who concentrated on the tiny pieces of feathers and fur and thread in front of them, illuminated not by overhead lights but by adjustable desk lamps trained over their vise.

They were tying flies for fishing, and the focus and camaraderie are just what has them hooked on this weekly activity sponsored by Project Healing Waters Fly Fishing Inc.

Dr. Leigh Wheeler of St. Andrew Church in Waterbury, a U.S. Army veteran, was an infantry officer in Vietnam. A “number of contacts with the enemy” and seeing his soldiers killed in action was traumatic, said the retired emergency physician. “I thank the Lord I made it through.”

But the experiences still haunt him. So at 75, he drives about 35 miles each week to the VFW and ties flies with other veterans who can empathize with his experiences. “It’s a comfortable environment,” he said.

Project Healing Waters is dedicated to the physical and emotional rehabilitation of disabled active military service personnel and veterans through fly fishing and associated activities including education and outings. The non-profit organization is incorporated in Maryland.

Though not a veteran, Edmundite Brother Francis Hagerty, a spiritual and retreat director based at St. Michael’s College in Colchester, is active in the Burlington Project Healing Waters group.

He began fly fishing in the 1980s after a friend got him interested and taught him the basics.

Soon he was taking a fly-tying course and learned how to tie flies that mimic insects and small fish that fish like to eat. “I enjoyed catching fish on flies that I had made myself. That got me hooked; but I found there is a lot more to fly fishing,” he said.

He always has loved being in nature, and fly fishing has brought him closer to it: “The more I’ve learned about the life cycles of insects and the habits of fish, the more deeply I have appreciated the beauty of creation and the wonder of it all,” Brother Hagerty said.

Daphne Zencey, a Project Healing Waters volunteer and Veterans Administration peer support specialist, is a U.S. Coast Guard veteran and former Project Healing Waters participant. “We are searching for that camaraderie and being part of a group of veterans who understand a different perspective of life and serving the greater good,” she said.

Some female veterans participate in the Burlington-based group too. “It’s a way to spend time with other veterans, but we don’t go down the rabbit hole of war stories,” Zencey said.

Brother Hagerty’s fly-tying skill and his presence are appreciated in the group, she added.

The action of fly fishing pulls him into a meditative mood. “I need to approach the water slowly and carefully, so I don’t spook the fish,” he said. “I need to watch for insects and perhaps fish rising to catch them. I need to observe the water flow, and think, ‘If I were a trout, where would I be?’” The sounds of the water and the rhythm of casting pull him into meditation too.  “The intense focus on all these things help me to quiet myself and feel the wonder of creation more deeply.”

Years ago he noticed that doing focused work with his hands frees his mind to think, pray and put things in perspective. “Splicing a rope, soldering a connection in a radio or sewing a quilt have all had this effect. When I tie fishing flies, I have the same experience,” he said. “Such focused activity pulls me in — into the activity and into myself — and I can find solitude.”

Cliff Lang, a parishioner of St. Mark Church in Burlington and U.S. Army veteran and retired Vermont Army Guardsman, enjoys fly tying and building fly rods then fishing “in any river I can find.”

“It’s a ‘me’ time. It takes your mind away from troubles,” said the former mechanic and truck driver. “You feel blessed to be out in a stream or brook and be back with nature.”

Moe Forcier, a retired Vermont Department of Public Safety training officer who lives in Jonesville, is a U.S. Army veteran. He said participating in Project Healing Waters fly tying and fishing “takes your mind off your demons because you have to concentrate.” And when he is outside fishing, “it is kind of like a prayer … being in tune with God through nature.”

Brother Hagerty said a veteran once told him, “When you’re tying flies or fishing, all the bad stuff goes away.”

Fly tying pauses the busyness of the religious brother’s life and gives him an opportunity to be alone with God. “I might be working on something that is fairly intricate, but I find myself quieted and able to listen to God’s still, small voice,” he said.

Brook trout is his favorite species of fish. “’Brookies’ are amazing. They are perfectly camouflaged above to blend with the rocks and gravel of the streambed and brilliantly colored below,” he said. “They are really quick to strike, so I have to be constantly watching a dry fly floating on the surface; if I don’t, the fish will spit it out when it realizes the fly isn’t real food.”

He has to be vigilant in his prayer, too, alert for the signs of God trying to catch his attention. He calls these signs “Oh Wows” because they show him something he hadn’t noticed before or something with which he is familiar but now sees differently. They make him say to himself, “Oh, wow.”

According to the Department of Veterans Affairs, there were 25 veteran suicides in Vermont in 2016.

Aware of this and knowing several friends who were deeply affected by their experience in the military, Brother Hagerty knew that fly tying and fishing have to be good for vets because he knows how the activities help him. “I got involved with [Project Healing Waters] as a volunteer, and it has been a privilege to help folks heal and a blessing for me,” he said.

"East is east and west is west," observed Rudyard Kipling, "and never the twain shall meet." Anyone [...]