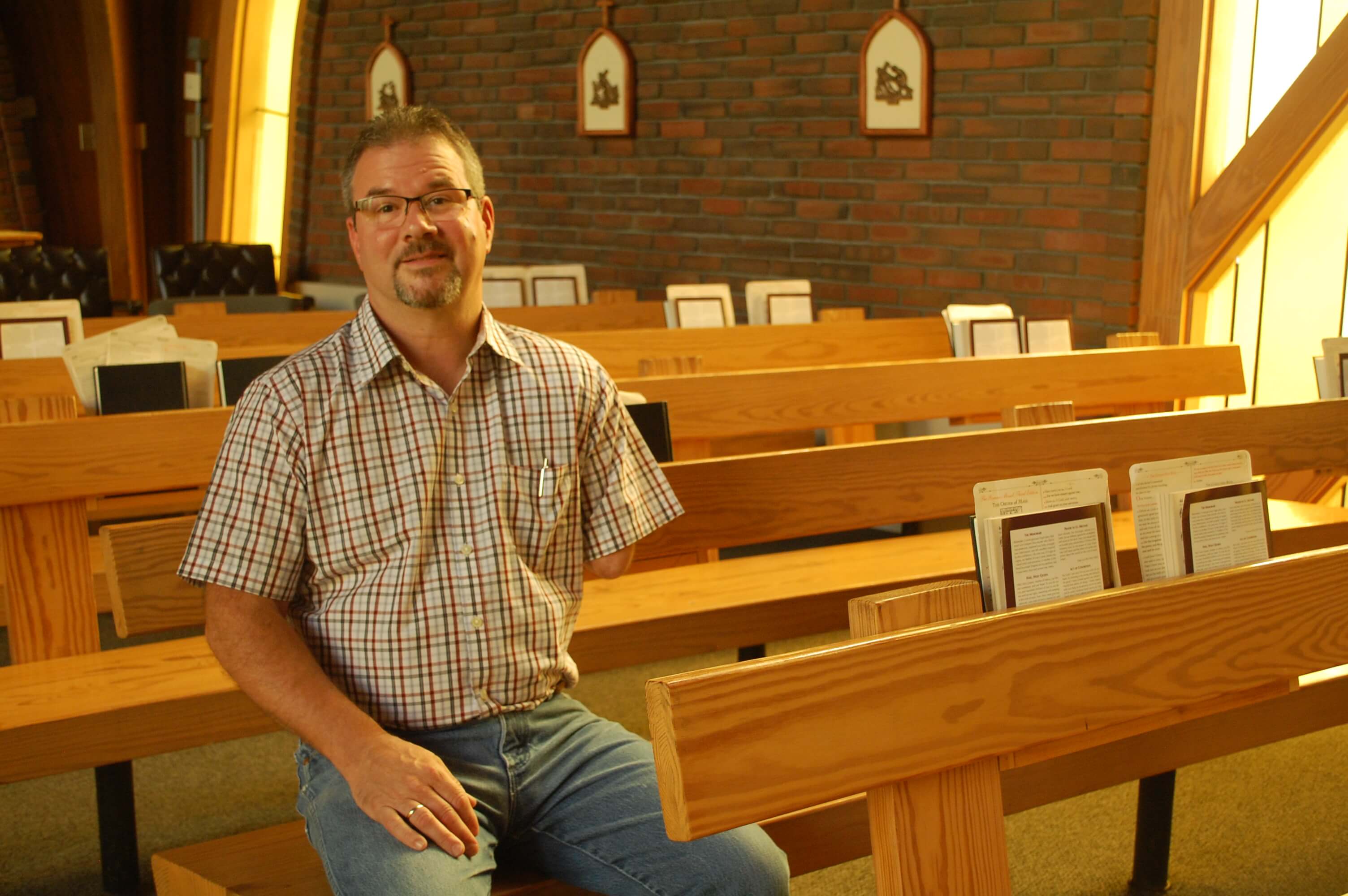 Photo Credit: Vermont Catholic/Cori Fugere Urban - Daniel McAvinney, a parishioner of St. Andre Bessette Parish’s Sacred Heart Church in Troy, says his faith is a gift and a big part of his identity.

When Daniel McAvinney was a teenager, he enjoyed rock climbing and hiking, so when a friend lead him up a New York rock face to see the view at the top, he was ready, even though they had no ropes or safety mechanisms.

“He was a pretty capable fellow, but I was somewhat limited” having been born without a left elbow and forearm, he said.

But before they reached the summit, his buddy stopped. “I’m froze,” he said with terror in his voice. McAvinney talked him to the top, where they shook off their fear, knowing they could have been killed if they had fallen.

McAvinney, whose father was a non-practicing Catholic, had gone to a Methodist Sunday school and church with his mother until he was about 11. He was too busy having adventures with his friends to think much about religion, but after the rock-climbing experience, he began to think its outcome had less to do with “dumb luck” than with “divine Providence.”

An environmental chemist for the Vermont Agriculture Environmental Laboratory in Burlington, he attributes the depth that has come into his life to his conversion.

He realized during his teen years that there was more to life than the next adventure with his chums. The mother of one of them was a devout Catholic who hired him as a handyman when he returned home to Lake George, New York, after earning an associate’s degree in math and science from SUNY Adirondack in Queensbury, New York.

She saw his need to learn about faith because “he was lost,” he recalled. She gave him tapes about basic Catholic teaching to listen to on a Sony Walkman. “I was emotionally in a place beaten down by life, as low as I could go,” he said.

Once when he was at her house, someone brought her Holy Communion, and when he asked about it, she told him it was the Body of Christ, spiritual nutrition.

He wanted to learn more and began “to search for the truth in earnest,” said McAvinney, who earned a bachelor’s degree in environmental science from Johnson State College. “I was still trying to make my way in life.”

After college, he worked at the state environmental laboratory in Montpelier. Feeling a hunger to know more about the meaning of life, he remembered a priest in Glens Falls, New York, whom he found had a “coherent, comprehensive approach to faith,” which made sense of McAvinney.

He began attending Mass at St. Augustine Church in Montpelier, listening carefully to the homilies given by then-pastor Msgr. Wendell Searles. He sat in the back of the church and, looking at the people in attendance, wondered what brought them to Mass week after week.

Following his desire to learn more, McAvinney enrolled in the Rite of Christian Initiation of Adults program in 1989; he was 28. Then, at the Easter Vigil, he became a full member of the Catholic Church.

“And so began the journey I could have never predicted,” he said.

Though he considered a vocation to the priesthood, McAvinney married in 1998 at Sacred Heart Church, where he continues to be active in various ministries and charitable works. He and his wife, Theresa, are part of a large extended family.

His faith, he said, helps him deal with the hard times that befall people like the death of a loved one. “We have hope in the resurrection … and hope in the mercy of God,
he said.

“Faith is a gift, for sure,” McAvinney said. “It’s a big part of my identity” and the lens through which he looks at life.