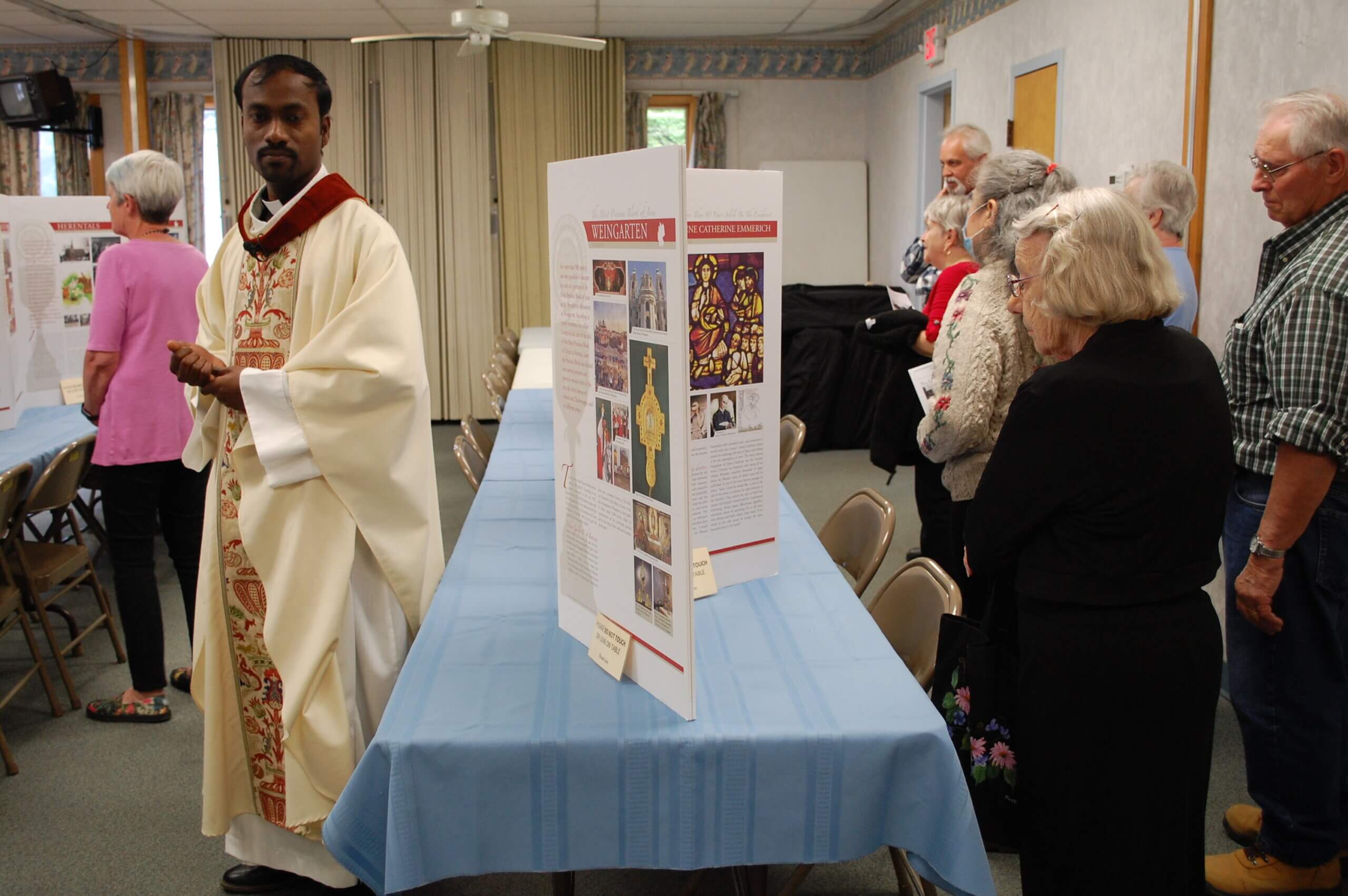 “I believe in it completely!” Marie Brochu exclaimed as she meandered through a display of Eucharistic miracles set up on tables in the Julien Room at St. Norbert Church in Hardwick.

“It’s like, ‘Wow!’” Lorraine Hill said later. “These aren’t jokes. These are really beautiful reminders to all of us of the reality” of the Body and Blood of Jesus Christ.

They joined other Mass-goers June 4 to visit the display that has been traveling throughout the Northeast Kingdom to learn about such Eucharistic miracles as those of Regensburg in Germany in 1255, Fikecht in Austria in 1310, Brussels in Belgium in 1370, Ludbreg in Croatia in 1411, Dijon France in 1430, Asti in Italy in 1535 and Tumaco in Colombia in 1906.

There are hundreds of Eucharistic miracles in the Catholic Church’s history, incidents in which the supernatural reality of Jesus’ body and blood in the Eucharist became powerfully and physically apparent.

Church teaching holds that the Eucharist is the “source and summit” of the Catholic faith. However, a 2019 Pew Research Center study found that only one-third of Catholics believe in the Real Presence in the Eucharist.

According to Herald of Good News Father Thomas Aquinas Giragori Chinnappin, administrator of Mary Queen of All Saints Parish that includes St. Norbert Church, the display is a way to increase people’s faith in the Eucharist.

The 70 panels displayed at the Hardwick church created eight rows of displays and included information on saints with a special connection to the Eucharist, like St. Stanislaus Kostka.

At the age of 17, he was seriously ill and believed to be near death. But the man who had offered him hospitality did not allow a priest to come to give him communion. But Stanislaus, who belonged to the Fraternity of St. Barbara, believed that she would bring him communion at the time of death. One night he awoke and exclaimed that she was there, bringing him communion. A few days later he was healed.

According to Vocationist Father Rijo Johnson, pastor of Mater Dei Parish based in Newport who borrowed the display to be shown in several Northeast Kingdom parishes, the presentation was created by a couple in Virginia who has been organizing a perpetual adoration schedule for their parish for five years. “I told them that it is hard to get few people to adore the Lord in the Northeast Kingdom, and we do have lack of adoration of the Holy Eucharist. They printed out these pictures, and we are the first Diocese they lent it to.”

He hopes the display brings awareness to local people about Eucharistic miracles throughout the world.

Among the Eucharistic miracles described in the display:

+ In Veroli, Italy: During Easter of 1570 the Blessed Sacrament was exposed for adoration, and the Child Jesus appeared in the host and manifested many graces.

+ In Bettbrunn, Germany, in 1125, a pious farmer stole the host and brought it to his farm. One day it accidentally fell to the ground, but no one could pick it up except the local bishop but only after promising the Lord that he would build a church in honor of the blessed Sacrament.

+ In Herentals, Belgium, in 1412: Hosts that had been stolen were found after eight days and were intact despite rain. They were found in a field near a rabbit burrow surrounded by a bright light and arranged in the shape of a cross.

+ In Bordeaux, France, in 1822: Jesus appeared in the host exposed for public adoration for more than 20 minutes, giving a blessing.

+ In Faverney, France, in 1608: A nighttime chapel fire destroyed the altar and sacred furnishings — but not the monstrance — in a monastery where the Blessed Sacrament was to be exposed for public adoration. The monstrance was found after a few days and was suspended in the air, intact.

“Adoration of the Holy Eucharist is the root cause of the birth and growth of vocation to priesthood and consecrated life. Ask any clergy and religious, they will tell you,” Father Johnson said.

Father Chinnappin said he hoped those who see the display will experience an increase in faith “so they continue to live as our Lord Jesus Christ wants … and they will try to know more about the blessing of the Eucharist.”

He added, “These kinds of miracles are happening and continue to happen.”

In addition to St. Norbert Church, the display was scheduled to be available at St. John the Evangelist Church in St. Johnsbury, St. Mary Star of the Sea Church in Newport, St. Paul Church in Barton and Sacred Heart Church in Troy.