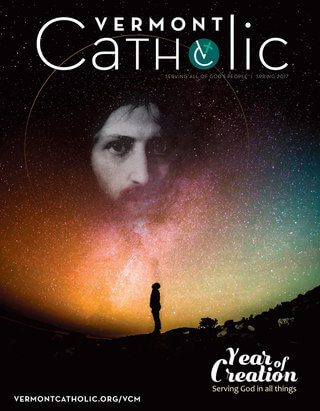 Vermont Catholic magazine earned a top honor at the Catholic Media Conference June 15 in Green Bay, Wisconsin, garnering first place in the “best magazine/newsletter of the year: diocesan magazines” category and supplementing its honors with four other awards.

Commenting on the “best magazine” award earned by Vermont Catholic magazine staff, the judges said: “Exceptional — in all aspects. Creative, engaging presentation (design/layout, art, photos, fonts) makes reader want to turn and read every page. And every page carries relevant, relatable, interesting and valuable content. Issues of this magazine likely are retained for some time as they are coffee-table book caliber.”

Last year, the magazine garnered a third place in the category as well as three other awards.

“I am so proud of the Vermont Catholic magazine team,” said Ellen Kane, editor and executive director of development, stewardship and communication. “This was only possible because they are the best and embraced the challenge of changing our format (from a monthly to a quarterly) in a short period of time. Their hard work paid off.”

Vermont Catholic Designer Monica Koskiniemi earned a third place in the Magazine Division for “Best Cover: 4-color, large (over 6 x 9 ½ inches)” for the Spring 2017 issue. “An inspiring and creative use of negative space and theme to illustrate the Year of Creation,” commented the judges.

The Diocese of Burlington’s print publication has received scores of awards throughout the years, and now as its communications efforts seek to engage readers on different platforms, social media awards are being added to the honors.

Noting that the Diocese “has a small following,” judges commented that staff posts “often and that is impressive.”

A judge “loved the daily readings posts” and called them “very inspirational.”

In the category of “best use of video in social media,” Vermont Catholic staff earned a second place for the “Year of Creation” video. “To celebrate creation, it helps to show creation. This video really captures the message by showing scenes that illustrate the theme,” judges said.

Vermont Catholic staff earned a third place in the Social Media campaign of the year category for the Bishop’s Annual Appeal Social Media Campaign 2017. Judges said it was an “excellent use of Facebook.”

They noted that “it’s nice that there is balance in the postings.”

They said “things like collected relics for veneration, cemetery information, teens in Vermont — are the type of posts that can keep and hold interest.”