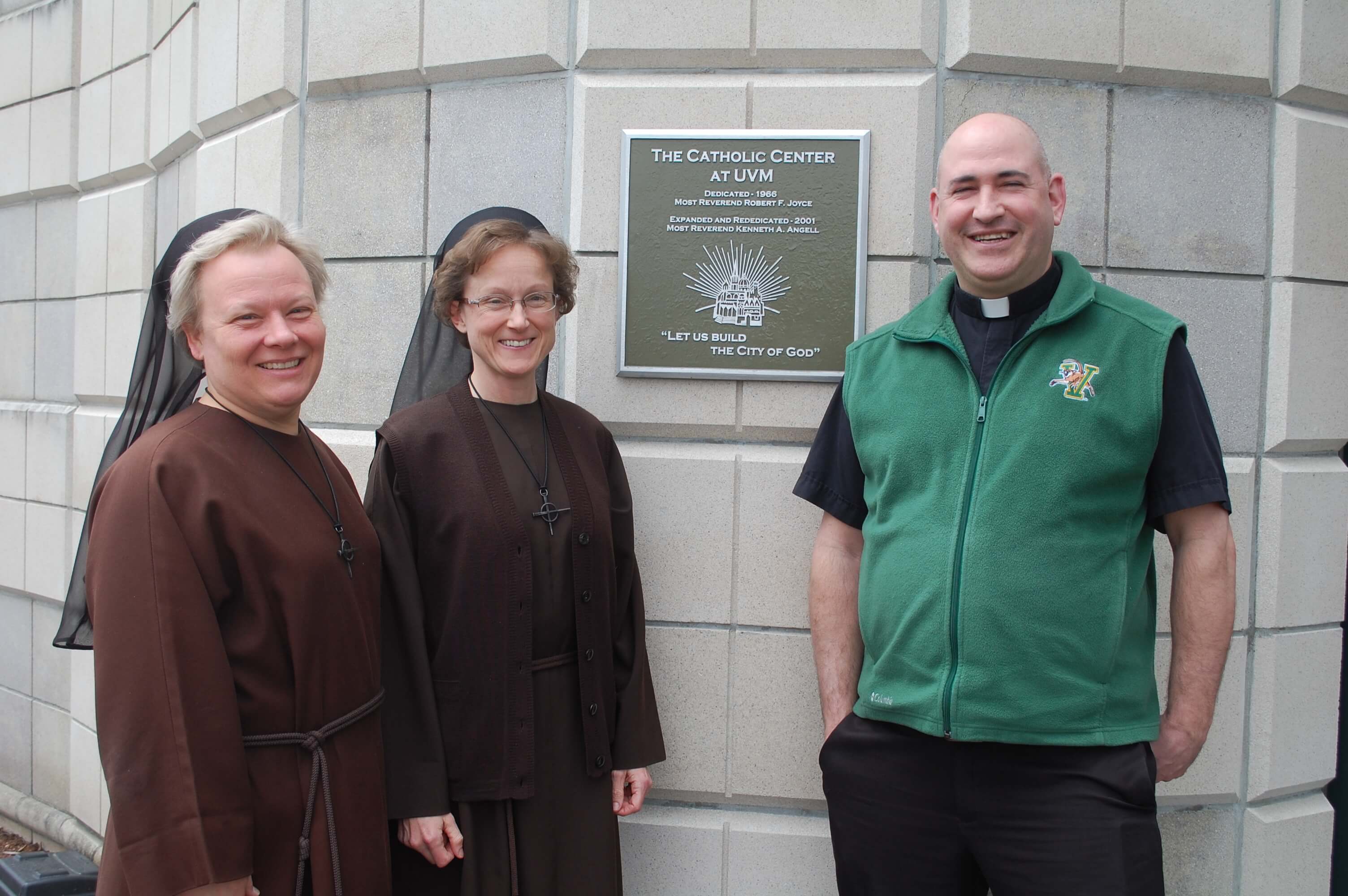 Photo Credit: Cori Fugere Urban - Standing outside the Catholic Center at the University of Vermont in Burlington are (left to right) Franciscan Sisters of the Eucharist Clare Hunter and Regina Cochran and Father Dwight Baker.

Franciscan Sisters of the Eucharist at UVM

Not long ago, Franciscan Sister of the Eucharist Regina Cochran, new on campus at the University of Vermont, went to the gym to shoot some hoops on the basketball court. It’s a sport she enjoys, and her presence on the court — in her brown habit and black veil — drew the attention of students there. One even put a photo of her on social media.

“People pay attention,” said Sister Cochran who joined the staff at the Catholic Center as a full-time campus minister earlier this year.

And that is just what she wants them to do, pay attention.

She wants to be seen on campus so members of the university community will know she is there to engage with the culture and meet them on their own turf. She wants to build relationships with people to bring them to a deeper sense of happiness rooted in God, and she is available to students, staff and faculty for “spiritual accompaniment.”

“We can’t wait for people to come to us,” said Father Dwight Baker, director of the Catholic Center. “We have to approach people with joy,” Sister Cochran added.

A second Franciscan Sister of the Eucharist, Sister Clare Hunter, has been in residence at the Catholic Center along with Sister Cochran and has been giving talks at the center and substitute teaching at Rice Memorial High School in South Burlington.

There has not been a religious sister working on campus for years, so Father Baker is pleased his staff now includes a sister and a married woman who, with him, offer different vocational perspectives.

They want to evangelize with joy and sincerity and authentically encounter people where they are.

Sister Cochran has worked as assistant vocations director for her community, as a high school theology teacher and as a campus minister.

Courtney Banach, a senior from South Burlington majoring in animal science, is active at the Catholic Center. She said the presence of the sisters on campus “adds another level of awareness that you can as a college student maintain your religion in college.”

And they are available to answer questions and offer guidance, she said.

The Franciscan Sisters of the Eucharist, a pontifical order established in 1973, is based in Meriden, Connecticut, and has about 80 members. Their charism is to work in the secular world to renew a sense of the sacredness of the human person. They work in such areas as teaching, nursing, music, physical therapy, law, counseling and business.

For more information about the order, visit fsecommunity.org.

For more information about the Catholic Center, visit uvmcatholic.com.