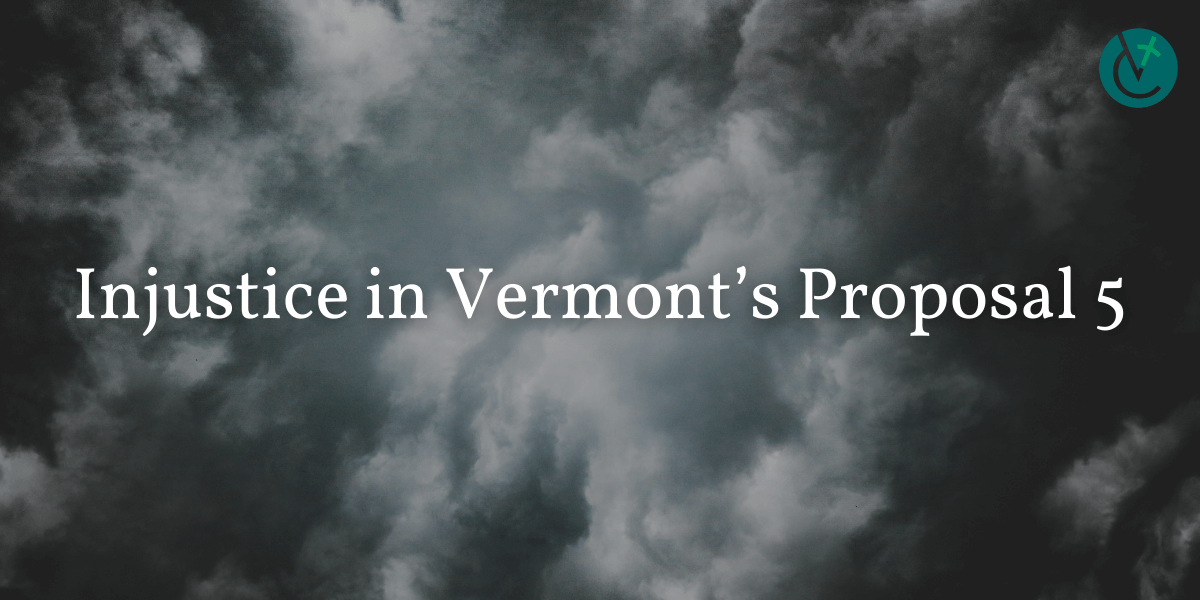 Both biblical and secular history abound with themes of the powerful imposing grave injustice on the weak.

Right now, Vermont is confronting such an issue in the form of a proposed constitutional amendment that will come back to the Vermont House in January.  If passed, the issue will appear on ballot in the November general election.

The measure, Proposal 5, would amend the Vermont Constitution to create the right to “reproductive autonomy.” Surprisingly, this troublesome amendment really is a two-edged sword. Its poorly crafted language exposes the very persons exercising their rights under Proposal 5 to potential for harm.

A fundamental difficultly with Proposal 5 is the ambiguous wording of the right being guaranteed. “Personal reproductive autonomy” is a very vague and broad term. The legislators crafting the proposal did not include the word “abortion” in the proposal at all.

Laws need to be written clearly so that others will know what they mean. Based on the legislature’s refusal to use more specific language, we may reasonably surmise that this was an attempt to confuse both other legislators and the general public.

Is it true “legislative malpractice?” Or was it simply intellectual laziness on the part of those crafting the proposal?

What treatments and procedures besides abortion would be included under the broad heading of “reproductive autonomy?” Proposal 5 would create a constitutional right to all procedures now in existence and those only imagined in some scientist’s mind, provided it can be supported as an act of “personal reproductive autonomy.”  Does that include procedures that are inherently and excessively risky? Perhaps the use of puberty blocking medications to prevent sexual development of a younger child, maybe without parental consent or transgender surgery, without parental consent.

One can imagine the father of a child insisting that the woman did not respect his “reproductive autonomy” when he encouraged her to abort a baby. He then argues that his rights under the amendment were not respected. Hence, he argues that he should not have to pay 18 years of   child-support. Such an unconscionable outcome may be an unintended consequence of Proposal 5.

Some advocates of abortion falsely allege that “pro-lifers” are “not pro-life, but just anti-abortion.” They challenge pro-lifers, “What are you doing to actually help women (and men) in the midst of an unintended pregnancy?” Those abortion advocates may be surprised to learn that right here in Vermont there are pregnancy support centers in every region of the state. Most are supported by local churches and other generous financial supporters. Curiously, no support comes from the state.

One such center in our area is Futures Pregnancy Care Center, formed by the collaboration of several churches and under the leadership of a former banking executive, Carmen Menard, who states that since opening last year, they have seen a very sharp rise in requests for assistance. Futures provides resources for ultrasounds under proper medical supervision, pastoral counsel, guidance through practical problems, such as education to help with employment, child development and material support. They also help connect the client with support through several state agencies.

Most women obtaining abortion are not given a full disclosure of the potential effects of the procedure prior to consenting to the abortion. Before a patient undergoes any surgery or even starting a new medication, the physician or care provider reviews the risks and benefits associated with the recommended treatment. This process is known as “informed consent.”  A patient must give free consent to a medical procedure, including medication, after having been informed of risks.

One consequence of abortion is adverse mental health effects, including an increase in depression, anxiety, post-traumatic stress, substance abuse and suicide attempts. When potential mental health consequences are not fully disclosed, the patient is placed at risk without having given a fully informed consent. This violates a bedrock principle of medical ethics known as “non-maleficence.”  It simply means “not harming” the patient.

Contrary to what often is alleged by the abortion proponents, most Vermonters do not believe that abortion up to the moment before delivery should be legal. Yet that is what Vermonters are being asked to approve.

And who will pay for those procedures? Not just abortions but the other services, including those not even imagined? Obviously, Vermont taxpayers and those paying health insurance premiums. And if someone from out of state wants such a procedure, 24 hours later after entering Vermont, they are eligible for coverage under Vermont’s Medicaid program.

Do Vermonters really want such chaos?

—Deacon Pete Gummere is a bioethicist and Diaconate director. Mary Anne Gummere is a retired registered nurse and teacher. She taught anatomy and physiology at Lyndon State College.