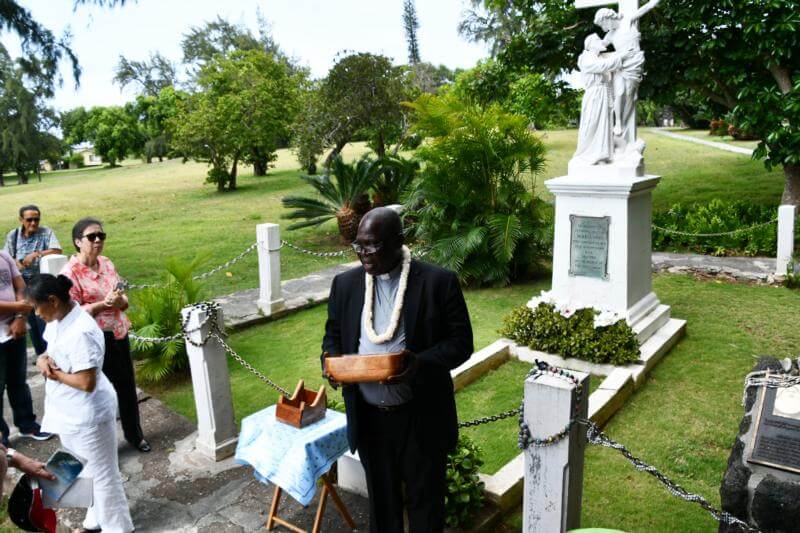 Photo Credit: CNS photo/courtesy Darlene Namahoe - Archbishop Matthew Man-Oso Ndagoso of Kaduna, Nigeria, holds a relic of St. Marianne Cope in front of her gravesite July 14 in the Kalaupapa section of Molokai, Hawaii. The archbishop hopes the relic of the Molokai saint will inspire healing in his violence-stricken country.

For the first time, a relic of St. Marianne of Molokai has been given to a diocese outside of the U.S.

That diocese is Kaduna, in north-central Nigeria, and its leader hopes that sharing the story of St. Marianne will be a positive symbol in his war-torn country. The north and central regions of Nigeria in particular have experienced a rise in violence in recent years.

“On a daily basis, hundreds of people are being killed,” said Kaduna Archbishop Matthew Man-Oso Ndagoso. “Communities are being wiped out.”

Fighting has primarily been between farmers and nomadic herdsmen over land use. Lake Chad and grazing lands have shrunk with rising temperatures. Majority Muslim herdsmen compete with primarily Christian farmers for space.

Recent violence resulted in the killing of 19 people, including two priests, at St. Ignatius Catholic Church in Ayar Mbalom, Benue state, on April 24. Fifty houses in the village were also burned.

“Human life has become like chicken life,” the archbishop told the Hawaii Catholic Herald, Honolulu’s diocesan newspaper. “We want the international community to know this is happening.”

“We are pleading on behalf of all Nigerians that are being killed today,” he said during a visit to Hawaii.

Archbishop Ndagoso and his fellow Nigerian bishops have called on President Muhammadu Buhari, a former military leader and Muslim who was elected president in 2015, to do more to stop the violence or resign.

There, Bishop Silva gave Archbishop Ndagoso a tour of the Hansen’s disease settlement. The archbishop also celebrated Mass to honor past and present Kalaupapa residents and the service of Sts. Damien and Marianne of Molokai.

During the pilgrimage, Sister Alicia Damien Lau, of the Sisters of St. Francis of the Neumann Communities, presented the archbishop with a piece of St. Marianne’s coffin, a second-class relic, on behalf of her religious community.

On July 15, Archbishop Ndagoso took the relic to Sacred Heart Church in Pahoa on the Big Island (Hawaii Island) to celebrate Mass and meet families displaced by the Kilauea eruption.

St. Marianne’s coffin fragment relic was held in a reliquary made of native Hawaiian woods by craftsman Manny Mattos, a parishioner of Resurrection of the Lord Parish in Waipio, Oahu.

“She’s a model of leadership that we can hold up,” said Archbishop Ndagoso of why he wanted to take the relic back to Nigeria.

He pointed out of her willingness, as the superior of the Syracuse, New York, Franciscan sisters, to come to Hawaii herself along with a group of sisters when called to help with nursing needs in the island. “She didn’t just ask others to go, she actually led them.”

Having St. Marianne’s relic will be a great example of that servant leadership, the archbishop said.

“Marianne and Damien, what they did in Molokai was to heal people, to bring them fullness of life, to give them their dignity.”

Mother Marianne Cope and six companion sisters arrived in Hawaii in 1883 from Syracuse to help care for patients with Hansen’s disease, or leprosy. She succeeded St. Damien de Veuster, a Belgian priest, in this health care ministry.

Among the family members at the ceremony at which she was declared a saint was Denise Cope Parry of Berlin, a parishioner of St. Augustine Church in Montpelier. Mother Marianne—born in Heppenheim, Germany, in 1838— was Parry’s great-grandfather’s sister. “I’m pleased that finally she is

being acknowledged by the Church for all she has done,” Parry said at the time.

Archbishop Ndagoso came to Hawaii for the first time last year at the invitation of his friend and Hawaii resident Darlene Namahoe. Namahoe met the future archbishop in the late 1990s in Rome, when both were living in the city and attending Mass at Chiesa di San Patrizio.

With about 196 million people, Nigeria is the most populated country in Africa and has the seventh highest population in the world, according to current U.N. statistics.