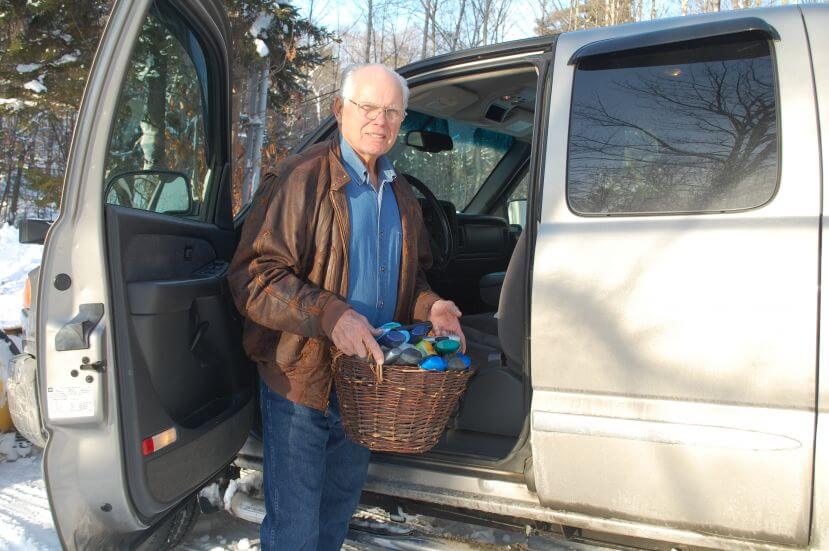 At Christmastime some Vermont parishes collect needed items to be sent to those incarcerated in Vermont prisons.

“Prison is a pretty dark place. It’s important to make sure people [who are incarcerated] know they are not forgotten,” said Deacon Gerry Scilla, coordinator of prison ministry for Vermont Catholic Charities Inc.

Parishioners of Our Lady of Mercy in Putney and the West River Missions have been participating in a prison ministry Christmas project for inmates at the Southern State Correctional Facility in Springfield since 2014, and this year their contribution to the ecumenical effort was 4-ounce containers of solid deodorant.

Deacon Richard Anderberg of Our Lady of the Valley Church in Townsend (one of the West River Missions) conducts a monthly Communion service at the correctional facility; he spearheads the parish’s effort that was part of an ecumenical endeavor involving a half dozen churches including Maternity of the Blessed Virgin Mary in Springfield and St. Joseph in Chester.

He had about 70 deodorant containers for his first delivery; if more came in, he would gladly accept and deliver it.

Parishioners — who in the past have contributed white socks, bar soap and microwave popcorn to the Christmas project — “really go well beyond what you expect,” he said.

“We’re always collecting at Christmas for somebody,” said Daisy Anderberg, Deacon Anderberg’s wife. “It is better to give than to receive.”

In past years the parish and missions have conducted a Christmas drive for families in the Selma, Alabama, area.

The people of the parish, he said, “give from the heart.”

Deacon Scilla coordinates Catholic volunteers in Vermont’s six prison facilities and administers the Prison Ministry Assistance Program to help those recently out of prison with needed assistance with food, rent and clothing. In addition, as a deacon he volunteers as the Catholic chaplain at the Northwest Regional Correctional Facility is St. Albans, visiting those who are incarcerated, conducting Rite of Christian Initiation of Adults classes and mentoring former inmates.

Recently Deacon Scilla procured a dozen teddy bears for inmates at the Springfield Correctional facility to give to their children. He ordered them online and had them shipped to the facility for distribution, using funds from donations to Vermont Catholic Charities directed to prison ministry.

Deacon Anderberg said he could see the sadness in the inmates as Christmas approaches and they are separated from their loved ones. “They need some cheering up,” and the gifts they receive help.

But more than the gifts, “it’s making contact with our brothers and sisters” who are incarcerated, he added. “It’s showing them there is a community out there that cares,” his wife added.