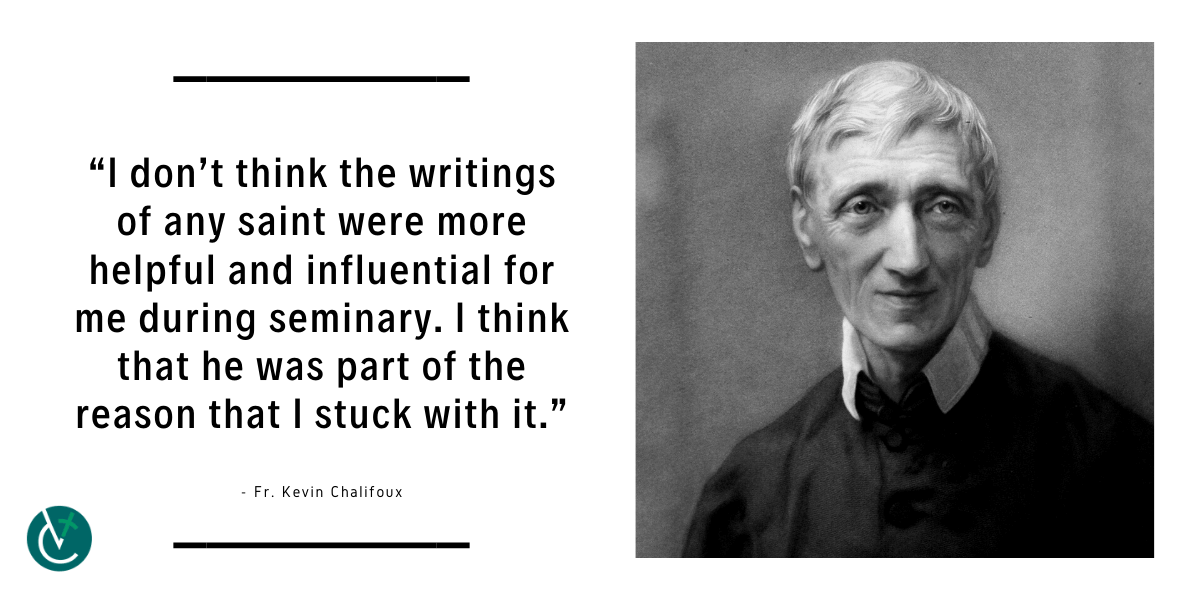 Holy Family Parish Hall in Essex Junction was filled Oct. 13 with more than 100 people celebrating the canonization of Cardinal John Henry Newman. Father Kevin Chalifoux, parochial vicar of Holy Angels and Immaculate Conception (St. Mary) parishes in St. Albans, and Father Matthew Rensch, parochial vicar of the Rutland-Wallingford Catholic Community, were inspired by the writings of the saint and wanted to share St. John Henry’s significance with others.

“I don’t think the writings of any saint were more helpful and influential for me during seminary. I think that he was part of the reason that I stuck with it,” Father Chalifoux said. “He just gave me a great sense of the desire to live a sincere life, a dedicated life, and I just found him deeply encouraging.”

The celebration in Essex Junction included dinner and Solemn Chanted Vespers in the Extraordinary Form with Father Brian O’Donnell of the St. Philip Neri Latin Mass Chaplaincy in Burlington as the celebrant and Father Steven Marchand, parochial vicar of St. John Vianney Parish in South Burlington, as the organist. It also included talks on St. John Henry’s writings and ideas given by Dr. Patrick Powers, a professor at Thomas More College, and by Father Chalifoux and Father Rensch. “I think it was a really successful introduction to him, and that’s what we really wanted,” Father Chalifoux said.

The Catholic Center at the University of Vermont in Burlington, also called the Cunningham Newman Center, had a celebration as well. St. John Henry’s words had an impact on Kim Allbee, campus minister at the Catholic Center, when she was a student at the university. She heard his quote, “I am a link in a chain, a bond of connection between persons” in a homily, and the line stuck with her. “I’ve always gone back to that in my ministry, in really trying to connect students with Jesus,” she said.

Upon learning about Cardinal Newman’s canonization, Allbee felt moved to celebrate the occasion. “As a Newman Center we needed to act, we needed to do something, we needed to recognize Cardinal Newman in some way,” she said. An online search led her to finding Novena with Newman on the Newman Canonization website. The novena talked about being a link in a worldwide chain. “As a Newman Center, I felt we were called to be part of that,” Allbee said. The novena was shared each day leading up to the canonization on social media. Community members,

students, alumni and parents were all invited to be a part of it. On Oct. 20, a Mass of Thanksgiving for the canonization was celebrated at the Catholic Center by Burlington Bishop Christopher Coyne. “We were happy to have the bishop be able to come celebrate with our community on this joyous occasion,” said Father Baker, executive director of the Catholic Center. In his homily, Bishop Coyne talked about St. John Henry’s idea of a university which led to the creation of Newman Centers throughout the world. “We try to live out the idea of a university by seeing the students as a whole person by engaging the mind, body and soul through our ministries offered here,” Father Baker said.