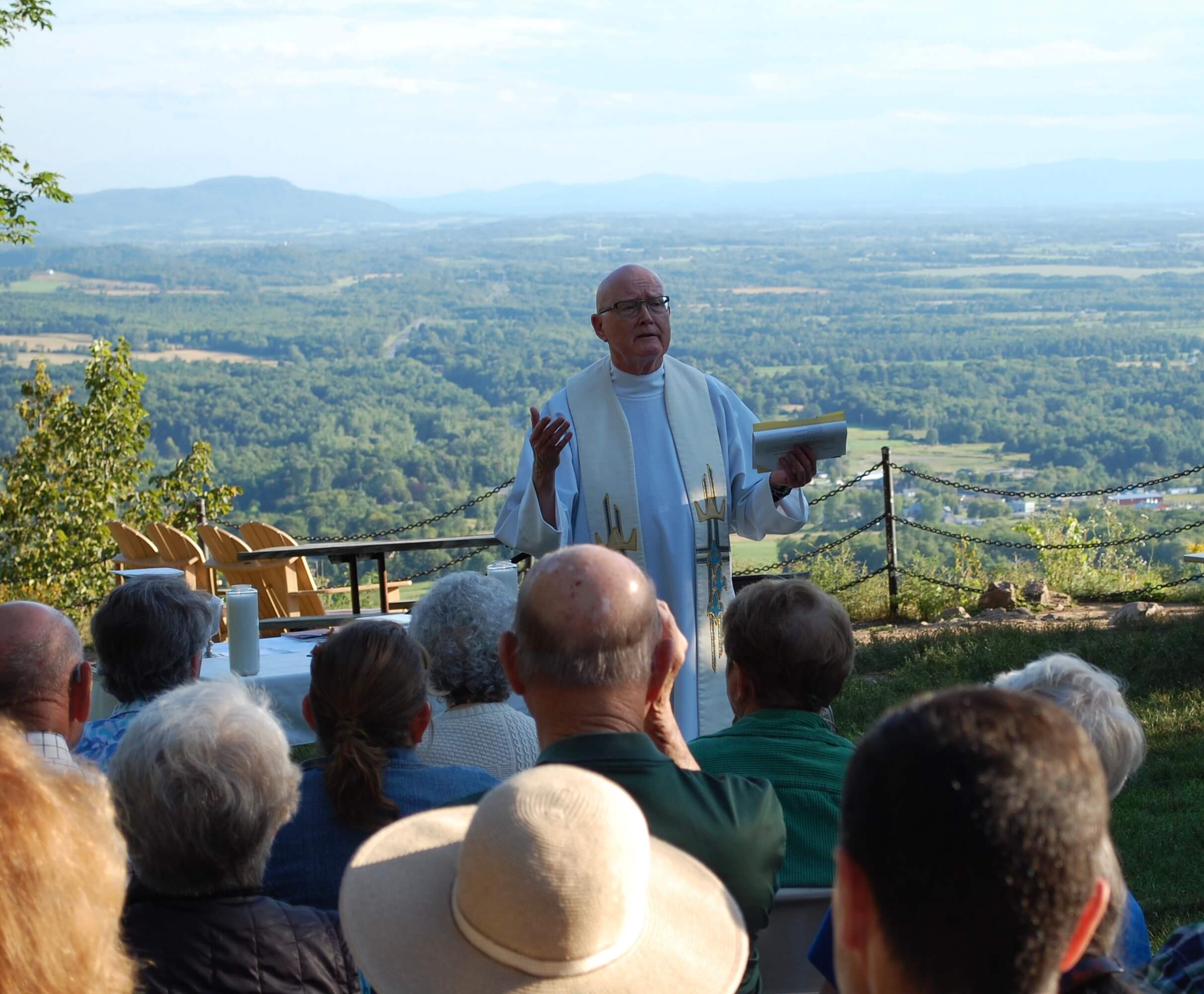 Sermon on the Mount

Agnes Lussier of Our Lady of Mount Carmel Church in Charlotte understands when people say they feel closer to God when they are at the top of a mountain.

She attended the Sermon on the Mount on nearby Mount Philo, a Mass for the August Feast of the Assumption of the Blessed Virgin Mary. “It’s so special and so peaceful,” she said of the annual event atop the 968-foot mountain with views of the Lake Champlain Valley and New York’s Adirondack Mountains. “I like to be in the beauty of nature.”

Lussier was one of more than 50 people gathered near the rustic, 1930s lodge for the Mass celebrated by the Our Lady of Mount Carmel pastor, Edmundite Father David Cray.

In his own “sermon on the mount,” he spoke of Mary and the doctrine of her assumption into heaven — the bodily taking up of her into Heaven at the end of her earthly life. Because she was “full of grace,” there was no room for sin so she had no original sin. “If sin is the cause of death coming into the world, this woman with no sin could not die. … She was taken to heaven, body and soul.”

“We know we have her as an intercessor,” Father Cray said. “She is a sign of hope.”

The Sermon on the Mount has been a tradition at Our Lady of Mount Carmel Church for nearly 20 years. “High places suggest closeness to heaven,” the pastor said before Mass began. “But I don’t believe I’m closer to heaven because I’m on top of Mount Philo,” he added with a laugh.

Noting the many religious references to mountains — like Mount Carmel, Mont St. Michel, Mount Tabor and Mount Sinai — he said many are seen as holy places, but “God is as close to us at the base as he is up here.”

But there was no denying it was easy to put oneself into God’s presence during the Sermon on the Mount with hymns accompanied by a violinist, a cool breeze, the setting sun, the gentle sound of crickets and the fluttering-by of butterflies.

“This is one of the nicest nights,” Father Cray said.

The Mass was followed by a potluck supper.

Christ our Hope in every season of life Respect Life Month, October 2019 …[T]ogether we may [...]