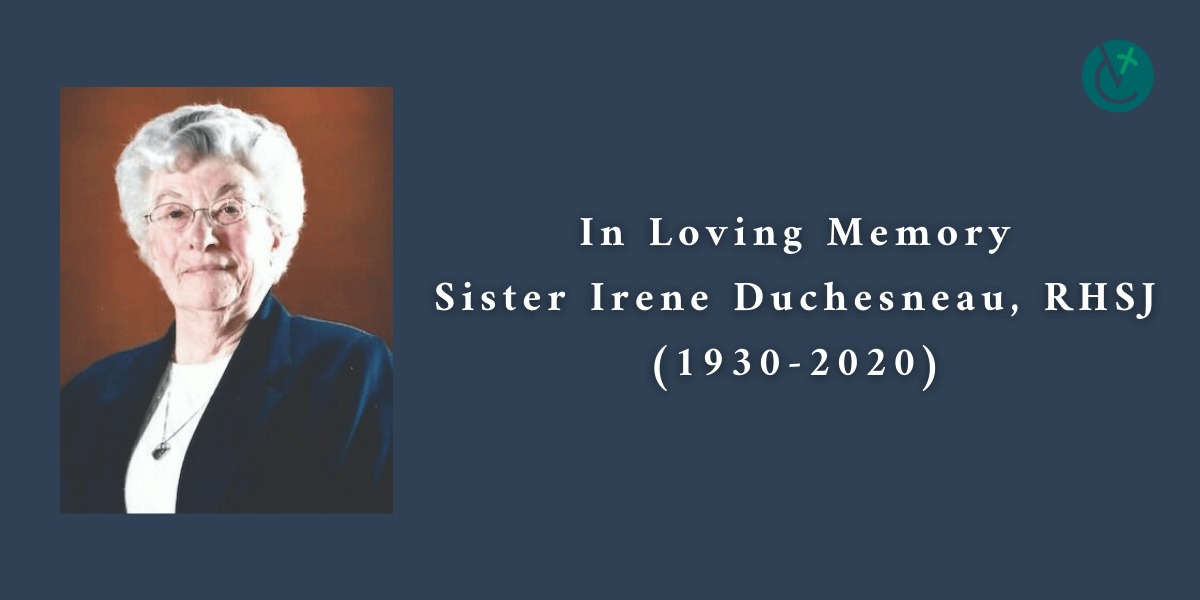 Sister Irene Duchesneau, a Religious Hospitaller of St. Joseph of the Fanny Allen community, died Dec. 5, 2020, having lived to the fullest of her abilities with which she was so richly blessed.

“Sister D,” as she was affectionately known, was a mighty force for good in a small package who let nothing stand in her way to help the less fortunate.  Anyone who tried, quickly learned that this diminutive sister was no pushover; mayors, governors, senators — no one could say no to her. I was blessed to call her friend and mentor when I took on her role as executive director of the Fanny Allen Foundation in 2009.

Many may know of her legacy as a leader at Fanny Allen Hospital in Colchester or director of the Jeanne Mance School of Nursing or her work in the community establishing and supporting nonprofit agencies such as COTS, Spectrum, Special Services Transportation Agency, Burlington Community Health Center and countless food pantries and shelters throughout the state. But what they may not know is how her faith and love for St. Joseph and the Holy Family shone through in her daily encounters with strangers.

From consoling family members visiting their loved ones as a volunteer greeter on the Fanny Allen Campus, to finding housing for someone she met on the bus, to dropping off meals for her neighbor who she knew was struggling, Sister D treated everyone as if they were part of the Holy Family.  She left her mark on the world not because she longed for recognition but because of her boundless desire to help those in need.

Sister D was called to dedicate her life to God at an early age and joined the Religious Hospitallers of St. Joseph, an order with deep roots in Montreal and Vermont. The order was founded in 1636 in La Fleche, France, by Jerome Le Royer de la Dauversier, a devout Catholic and father of five. He saw his mission in life in simple terms: to serve in the imitation of Christ. He dedicated himself to St. Joseph and the Holy Family and saw Christ in the poor, the sick and the elderly.

In 1642, with the help of Jeanne Mance, a nurse dedicated to God from a young age, he gathered the resources to establish the first hospital in Montreal, Canada, the Hotel-Dieu. Jeanne was its administrator until the arrival of the first three Religious Hospitallers of St. Joseph in 1659, who governed and administered this hospital. Today, the Hotel-Dieu has become part of the University of Montreal Medical Center.

In 1807, Frances “Fanny” Margaret Allen, the daughter of Ethan Allen, Vermont’s most famous patriot, joined the order against her family’s wishes after a mystical experience left her with no doubt of God’s will for her life. Fanny became the first Catholic sister from New England and a beacon to many former Vermont skeptics who converted to Catholicism. She was a model of prayerful service as she nursed wounded soldiers in Montreal amid great poverty and imminent threat of disease during the War of 1812. She died of tuberculosis in 1819 and is buried in the crypt beneath the chapel of Hotel-Dieu.

Burlington’s first bishop, Bishop Louis deGoësbriand, dreamed of opening a hospital for the poor. His successor, Bishop John Michaud, was able to carry out this vision with a donation of the Dunbar Hotel in Colchester from Michael Kelly, a former employee of Mary Fletcher (who established the Mary Fletcher Hospital in Burlington) located on the farmstead of Jabez Penniman, Fanny Allen’s stepfather.

In 1894, three Religious Hospitallers of St. Joseph came to Vermont from the Hotel-Dieu in Montreal to transform the Dunbar Hotel into a place of healing. Fanny Allen Hospital was inspired by the memory of “Fanny” Allen and opened with a special mission to care for those that did not have access to medical care.

Sister Irene Duchesneau’ legacy lives on through the Fanny Allen Foundation that she helped establish and represents the mission of her and her religious sisters in its grants to nonprofits that care for the poor, the sick, the homeless and the elderly.