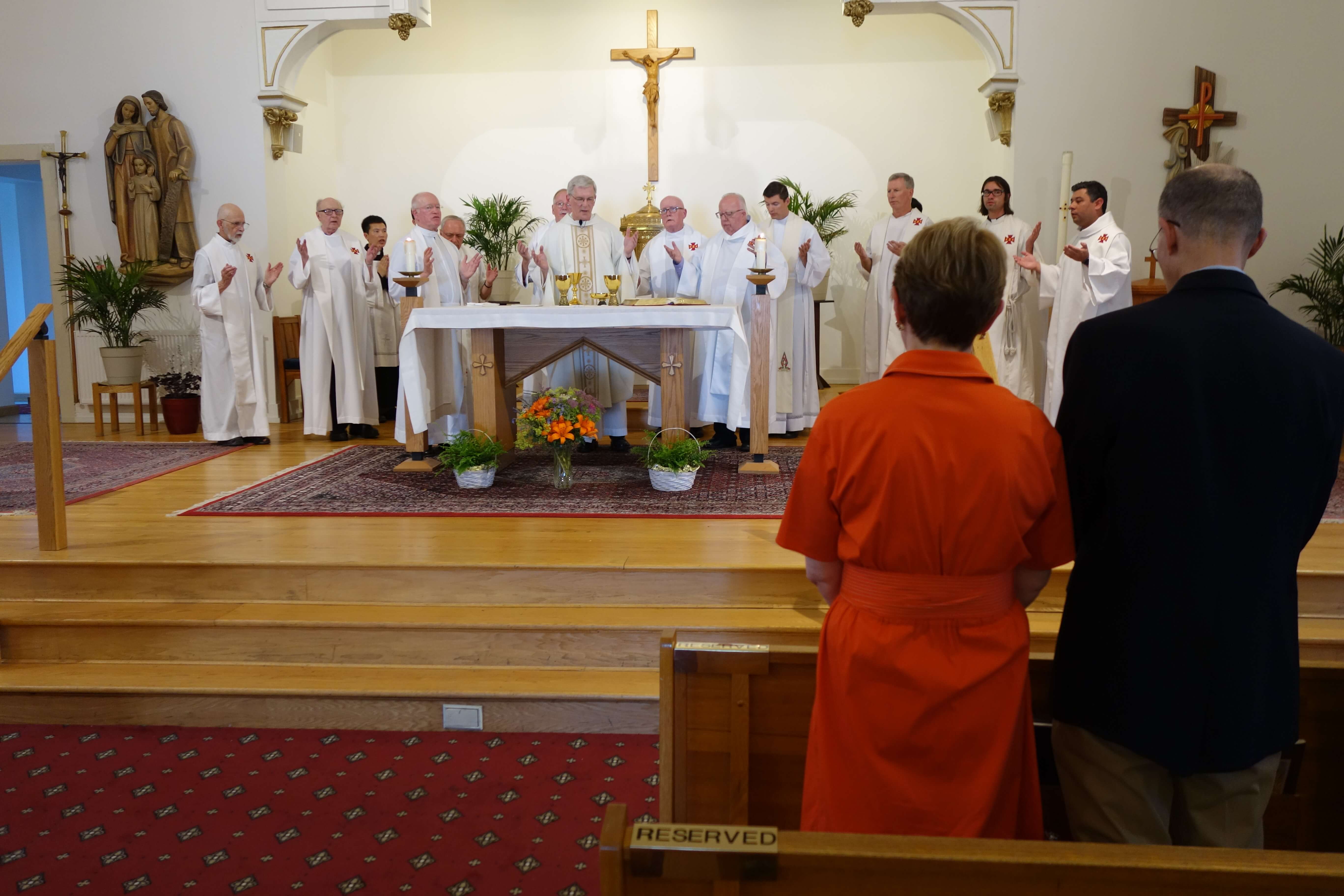 Photo Credit: Submitted photo/Mark Tarnacki - Members of the Society of St. Edmund join celebrant Father Stephen Hornat, superior general, on the altar of Holy Family Church in Essex Junction during the consecration on July 3 as the new president of St. Michael’s College, Lorraine Sterritt (red dress), and her husband, Bert Lain, observe from the front pew (right). The occasion was to commemorate 175 years to the day since the founding of the Society in France.

At the Society of St. Edmund-administered Holy Family Church in Essex Junction, about 150 people attended a Mass celebrated by Edmundite Father Stephen Hornat, superior general, commemorating 175 years to the day since the founding of the society in France on July 3, 1843 in the ruins of Pontigny Abbey.

In his homily, Father Hornat quoted a National Catholic Reporter opinion piece of recent months. The writer, he said, mentions civil rights activism by the Edmundites, founding order of St. Michael’s, and “seemed surprised by the fact that a small religious community could be at the forefront of the Civil Rights Movement, have a large mission operation in Selma and have a college in Vermont.”

Yet, Father Hornat said, faith and patience have demonstrated for the Edmundites that small is not necessarily a liability, as witnessed powerfully in the Gospel parable of the mustard seed (one of the readings for this Mass) or by God’s choosing relatively obscure Israel to be His people. “Our size, 25 members, is not a liability. Our average age is well over 70 but our age is not a liability. In God’s eyes, these things do not matter. Not having the zeal, the passion, the commitment for what we do in God’s name [would be] our only liability.”

Jesus’ words from the Gospel for this Mass, spoken by Father Hornat in his homily, hinted at the history and future of St. Michael’s College and other sown-in-faith Edmundite missions: “This is how it is with the Kingdom of God. It is as if a man would scatter seed on the land and he would sleep and rise night and day and through it all the seed would sprout and grow, he knows not how.”

About 20 members of the Society of St. Edmund, attended the Mass. Several local religious sisters who have worked with the Edmundites also attended, including those from the Sisters of Providence, Sisters of Mercy, the Missionary Sisters of Our Lady of Africa, and the Daughters of the Holy Spirit.