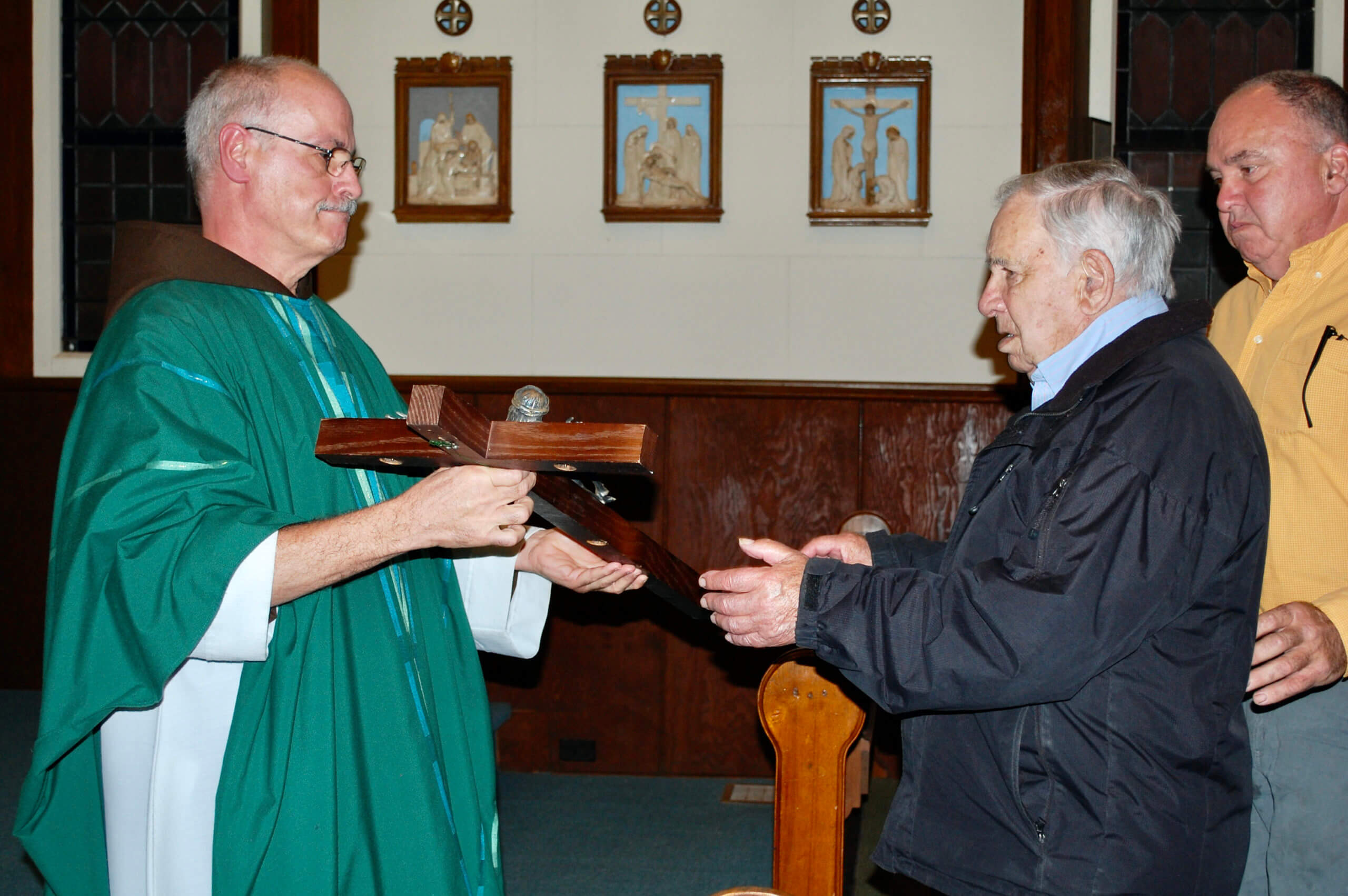 One hundred and forty years after the laying of the cornerstone of St. Agnes Church in Leicester, church members attended the last Mass to be celebrated there.

The date for the Oct. 23 Mass was chosen to coincide with the anniversary of the laying of the cornerstone on Oct. 23, 1881.

“The time has come [for the church to close], and we realize that. We are saying good-bye in our own way,” said Diane Benware, president of the parish council and sacristan. Rather than being told the church was closing at an arbitrary date, parishioners met during the summer and decided they wanted it to close their way and to mark the occasion “in a fashion that made sense to us” with an opportunity for fellowship after.

“We knew the closing was coming. The subject had been broached at least three priests ago,” said the parishioner of 46 years.

The church, built in 1881, was erected to serve the farming communities of Leicester and Whiting. When it was first built, parishioners traveled by horse and buggy to the white clapboard church that sits at the edge of the Leicester-Whiting Road.

In recent years, the church was closed for six months of the year but opened for Christmas Eve Mass and for Mass from May through October.

In the 1960s there were 66 families; now at most there are a dozen active families, Benware said.

Parishioner Rachel Chartrand said the church members are like family. “It’s just sad” to see the church close, she said. “This has been home. Whenever I needed that spiritual uplift, I’d come here.”

Parishioner Paul Quesnel agreed that it was sad to see the church close. “I guess it was inevitable. Generations of locals have cherished this church for many, many years,” he said. “It’s a sad sign of the times” when many congregations are dwindling and the Church has fewer priests to serve its churches.

“For the parishioners of St. Agnes this is difficult time,” said the pastor, Father Maurice Moreau, OFM Cap, who also serves Our Lady of Good Help Church in Brandon and St. Alphonsus Liguori Church in Pittsford. “It is emotionally painful. In the church’s rich history of 140 years, many happy events, baptisms, first communions and weddings, were celebrated in this church. It has also been the place where parishioners mourned their beloved departed. For the Catholics of Leicester and Whiting many of their memories are rooted in the people and celebrations of this church. Their emotional pain gives evidence of the special place this structure and its people hold in their hearts.”

According to Josh Perry, director of liturgy for the Diocese of Burlington, the role of memory plays an important part in the celebration of the Eucharist and takes on even more special meaning when the final Mass is celebrated in a church building. “We engage our collective, communal memory of the life of the church – the baptisms, first communions and confirmations. The marriages and deaths. The many times sins were forgiven and people reconciled to God in that space,” he said. “We remember the formation we received in that church – the spiritual formation and catechetical formation. We remember how we were steeped in the prayer life of the Church through the many devotions offered in that sacred space. We take those memories and we place them on the altar, offering them to God and giving God thanks for the gift of His church. Those memories shape who we are. Then we carry those memories with us when we join a new community for worship.”

Those attended St. Agnes Church are welcome in the Catholic churches of Brandon, Orwell and Middlebury, said Burlington Bishop Christopher Coyne of the Catholic Diocese of Burlington in an earlier letter addressed to Father Moreau. “We need to ensure that the pastoral needs of those who make up St. Agnes community are met,” he said.

In a recent letter to Father Moreau that he read at the Mass, Bishop Coyne said the closing of the church was sad but hopeful — “sad that what has been the place of worship for so long is now closing, but hopeful in the ongoing presence of the Catholic Church in Vermont.”

The small, white clapboard church has “stood as a witness of faith among the beautiful farm fields of central Vermont,” he continued. “As one travels west on the road which runs in front of the church, it suddenly seems to appear amidst the fields, on its own, apart from any town or county center, a beacon of faith and a symbol of God’s abiding presence, a holy place.”

But what made the church a holy place was not just the sacraments celebrated there but those who were present for them. “Carry that holiness with you to your new places of worship,” the bishop urged.

During the meaningful, poignant and touching final Mass, some parishioners were given special gifts from the church to hold for safekeeping or to deliver to a new home:

+ Michael Frankiewicz received the flag of the United States that had hung in the St. Agnes Church sanctuary to give to the American Legion.

+ Stephen Bilodeau was given the collection baskets.

+Jackie Dutil got the clock that had hung on the back wall of the church.

+  Randy and Sue Dennis received the icon of St. Agnes, written by their son-in-law that had hung on the lectern. It is to be hung in the renovated sacristy at Our Lady of Good Help Church in Brandon.

+ Erica Mathis was given the lectionary.

+ Sally Foster took the Mass linens, purificators, corporal and pall to bring to the Brandon church.

+ Anita Bilodeau received the flowers from the sanctuary.

+ Diane Benware took the sacred vessels for Our Lady of Good Help Church.

+ Members of the Quesnel family received the crucifix that members of their family had given years ago to hang in the sanctuary.

Victor Quesnel, 94, a former pastoral committee chairman, remembers attending St. Agnes Church as a child with his parents; when he bought a farm in Whiting and had his own family, he brought his children to the church.

The closing of the church was sad, “but life sometimes bring us things that are hard to accept,” he said. “We count on Jesus to help us.”

On Oct. 22 Exposition of the Blessed Sacrament and Benediction took place at the church for the last time.