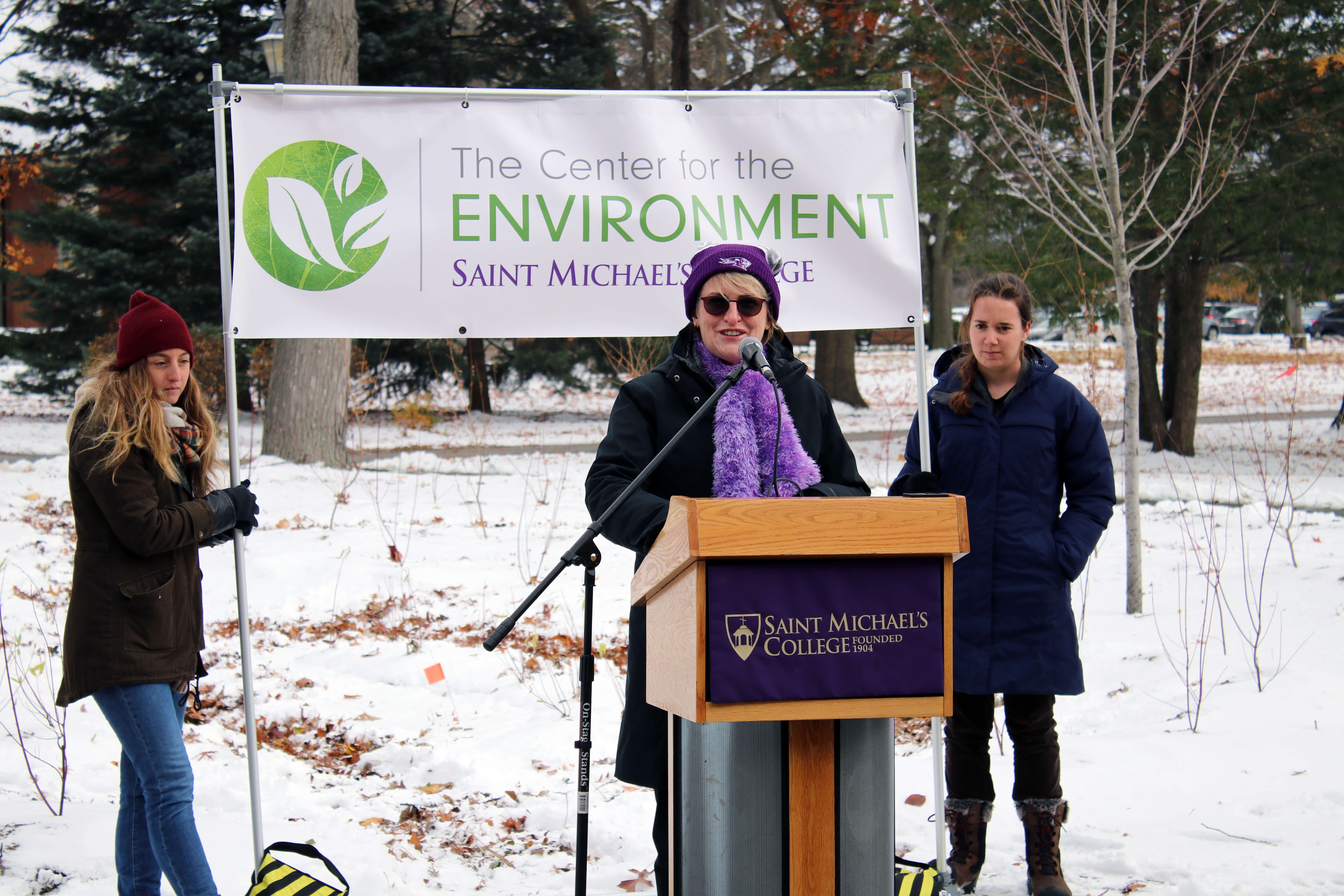 “Engaging students in the stewardship of their campus in a manner so different from any other liberal arts institution” is the well-advanced goal of Kristyn Achilich, director of an ambitious new St. Michael’s College Center for the Environment, which had a formal outdoor dedication ceremony Nov. 8 in the middle of the Colchester campus.

The ceremony took place in a new tree nursery located squarely between the college’s student center and residential buildings in a busy courtyard. Scores braved cold, wind and flurries to participate, including Vermont Natural Resources Agency Secretary Julia Moore, who was alongside faculty, students, clergy and other campus partners in the center’s work.

An inch or so of snow covered a line of holes in the nursery where, after the opening speeches, officials and students planted trees under direction of Stanger, who made opening remarks to evoke a solemn sense of place from the long-ago pre-historic eons when the campus was under a sea, to its habitation by native Abenakis, to early agricultural uses before Edmundites established a humble college in 1904, a college that has rightly and purposefully honored God’s creation in many ways through its history, speakers said.

Edmundite Father Marcel Rainville of the campus-founding resident Edmundite religious community, closed the ceremony (after joining the tree-planters) with a formal blessing. A reception followed in the nearby Dion Family Student Center.

Sterritt in her remarks said the center is “a pivotal undertaking for the college: a unifying effort and an exemplar of our college’s principle that our students do well and do good.” She said the center’s core principles of “Research, Contemplation and Action” are “the foundation for meaningful progress on the matter most crucial to the survival of our species and the survival of our planet.”

Center Director Achilich said the “driving force” of the center is “the collective energy and resources of our academic departments, our community and our facility. When we say academics, we really mean cross-disciplinary, so of course Environmental Studies and Science is an anchor tenant, but we see learning opportunities in each discipline from philosophy to education to the humanities and sciences.”

As for the center’s “facility,” she said, “we truly mean the campus — not solely the four walls of a classroom that we traditionally think of as our learning spaces, but the several hundred acres we inhabit and steward here in a suburban, northern New England state; and if the center had a heartbeat, I think it would reside in the community. This is where we see our students, our co-curricular programs like Green Up, the SGA, and Adventure Sports and our off-campus partners residing.”

Inspiring students and collaborating faculty with formidable energy and dedication since returning to her alma mater in 2015 to oversee the campus farm and its related academic programs and teach environmental education, food systems and agriculture in the College’s Environmental Studies and Science Department, Achilich, a 2005 St. Michael’s biology graduate and master’s candidate, shared highlights of the center’s first three months leading up to the ceremony, including: Development of  “engaged courses” with substantial field components; establishing strong partnership across campus for the new center with a host of student, faculty and staff; and planting 120 trees in the highly visible space in the campus center to raise awareness of center work, since much of it occurs in less visible locations like the Farm and the large Natural Area across Route 15. Another early initiative has been designing and producing four new signs to highlight existing sustainable campus initiatives: The Farm, the Natural Area, and the College’s resource management.

Fall semester special events under the Center umbrella have included “Story Walk’ teaching events; an exhibit with artist Nancy Winship Milliken’s Studio in the McCarthy Arts Gallery coinciding with a sculptural Winship installation in the Natural Area; Farm tours for visiting community members and prospective students at Admission events, a coming screening of an environmentally-themed film; and environmental panels during a Career Symposium that also was taking place Friday on campus the day of the ceremony. Achilich said a month-long celebration during fall semester focused on the “coordinated narrative for the College’s green/sustainable/environmental efforts” that have had anecdotal results already in such areas as increased awareness of Center work, cost-sharing, productive communication among partners, collaboration across programs and departments and expressed interest in the community to join Center work.

The month of events highlighted “many of the different learning modalities that an interdisciplinary academic center can host, curate and facilitate,” said Achilich, describing the center’s orientation at the college as “a physical and contemplative space to build partnerships across existing programs in order to challenge and empower our students to become environmentally conscious citizens as leaders, advocates, scientists and humanitarians.”