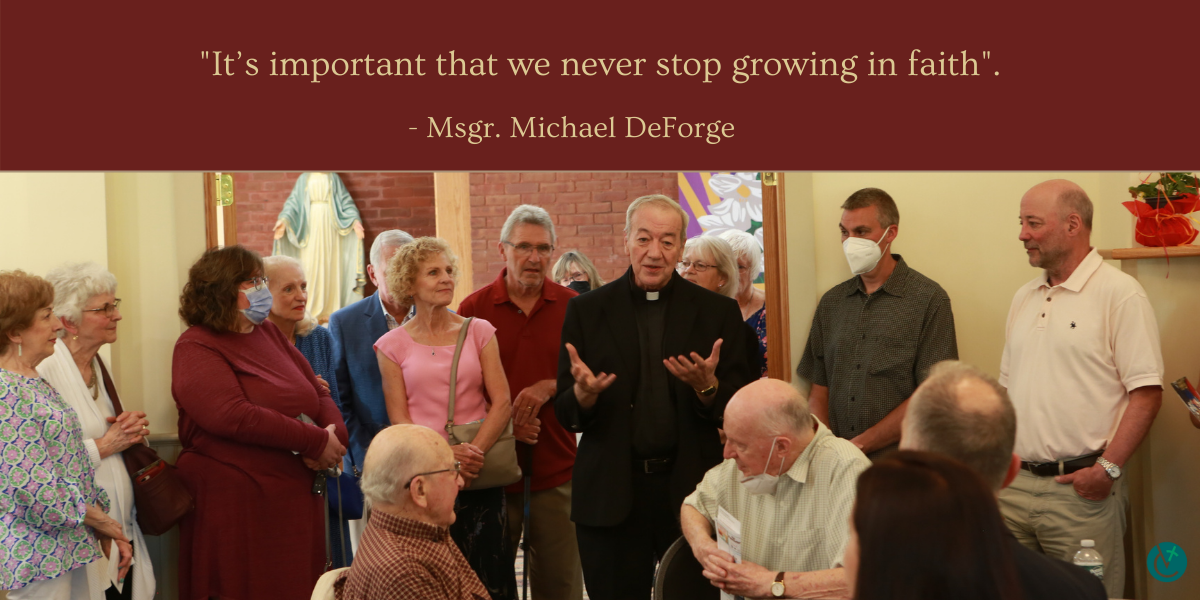 ‘The Blessed Sacrament is at the heart of my priesthood’

When, in 2021, Pope Francis approved a change to the Feast of St. Martha, which now includes her siblings, St. Mary and St. Lazarus, Msgr. Michael DeForge understood.

The Holy Father’s explanation cited, “the important evangelical witness they offered in welcoming the Lord Jesus into their home, in listening to Him attentively, in believing that He is the resurrection and the life.”

Listening to Msgr. DeForge, now 43 years a priest, recount the influence of his home life on his vocation, it’s easy to see the connection. “I had a wonderful family life. I saw how devoted my parents were to God’s will,” he said, crediting an “atmosphere of prayer” for creating a family, including his five siblings, that “loved being Catholic.”

The experience of Catholic school played a part as well, said Msgr. DeForge, when, “back in the ‘50s, vocation to religious life was a viable option put out there for young people.”

When he was in fifth grade, a nun asked him if he had ever thought of the priesthood. He had. The two stayed in touch over the years.

During college, he became interested in social work, working for a while in the field after graduation. But the idea of the priesthood never left him, so he took a leave of absence from his job to spend time in discernment.

In 1975, the young Michael entered Mt. St. Mary Seminary in Emmitsburg, Maryland, home of St. Elizabeth Ann Seton, the first American-born saint and educator who has been described as a charismatic leader who built a deep spiritual foundation on Mass and the sacraments, common prayer and instructions.

“Given that her canonization took place two weeks after I entered the seminary,” said Msgr. DeForge, “she is a favorite saint,” who had an influence in the unfolding of his vocation.

Msgr. DeForge was ordained on July 7, 1979, by Burlington Bishop John Marshall at the Cathedral of the Immaculate Conception in Burlington. From that point, through his varied ministries and service, it would always be “the Blessed Sacrament at the heart of my priesthood,” he said.

During the coming years he would serve as parochial vicar in the parishes of St. John the Evangelist in St. Johnsbury, Immaculate Conception in St. Albans and St. Mark in Burlington; as a spiritual director; diocesan director of religious education; diocesan director of vocations; and, at the request of Burlington Bishop Kenneth Angell, he was instrumental in creating a House of Discernment in the Catholic Center at the University of Vermont, where he served as director.

In 2006, he was assigned as pastor of St. Catherine of Siena Parish in Shelburne, where he is known for his powerful homilies and special concern for the future generations of the parish.

“I spent 13 years in campus ministry in the University of Vermont and 28 years doing campus ministry part-time in Norwich University, Northfield,” Msgr. DeForge said. Those 28 years were done in partnership with Msgr. Richard Lavalley, now pastor emeritus, St. Francis Xavier Parish in Winooski, a long-time friend. “While the life of a priest is good,” Msgr. DeForge said, “priestly friendships are so sustaining in ministry.”

Years of those ministries have shown him that “God has not stopped calling young men and young women to religious life. We need to step back to the contemplative aspect, spend time with Jesus and ask how we can be instruments” in the faith formation of young people, he said, recalling his “work with college students who are for the first time away from their family unit, first time really relating to Jesus on their own, forming their conscience and growing in faith. It’s important that we never stop growing in faith.”

From a religious education perspective, he stressed, “Children are open to wonder, and we need to capitalize on that, to encourage a friendship and relationship with Jesus that grows as they grow.”

It is the Eucharist, he said, that is “the essence of who we are as Catholics. We can never let the door close on this important moment in time, to encourage religious education programs to be attentive to children and young people, to connect them to the sacramental aspects of our faith. The Eucharist is top priority.”

Last year Msgr. DeForge was granted senior priest status. He now serves as chaplain at Our Lady of Providence Residential Care Center in Winooski and continues to help in parishes where needed.

Having recovered from a stroke several years ago, Msgr. DeForge is praying the Lord will keep him active doing what he loves to do. “So far, so good,” he affirmed.

— Originally published in the Fall 2022 issue of Vermont Catholic magazine.