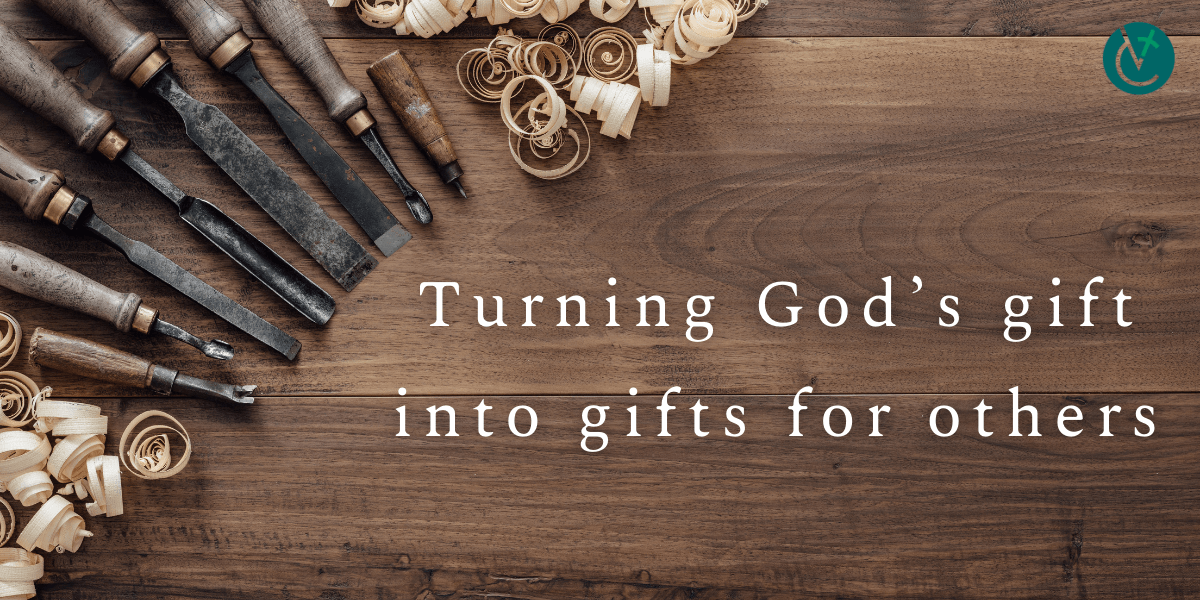 Turning God’s gift into gifts for others

Russell Marchand of Milton turns God’s gift to him into his gifts to others.

Marchand has plenty of non-material gifts to share: love, support, counsel, guidance, a friendly smile and a listening ear. But when he gives material gifts, they are often made of wood.

A skilled carpenter, Marchand has made all kinds of things like walking canes, cutting boards, indoor and outdoor creches; he’s using his lathe to turn mugs and cups.

He built the covered porch on his house as well as built the 20 x 24-foot barn in the back yard. And he made a television cabinet for the hall at Our Lady of Grace Church in Colchester and a folding catafalque for the St. Philip Neri Latin Mass Chaplaincy at St. Anthony Church in Burlington.

“The liturgy is the work of the whole church. When we think of the vast and varied work that goes in to church building, vestment making, the vessels, pipe organs, candles etc., we realize that every human skill is used and comes together in the liturgy for the worship of God,” said Father Steven Marchand, Marchand’s son who is parochial vicar of the Rutland-Wallingford Catholic Community. “It’s moving to see my father take his place in that great work.”

The carpenter, St. Joseph, helps Marchand grow in the virtue of patience. “Taking the time to do something right and well in any craft can test us. St. Joseph spent a lifetime in a workshop. I’m sure his skills weren’t developed in a day,” Marchand said.

A member of Our Lady of Grace Church and the Latin Mass Chaplaincy, he is a member of the Knights of Columbus. He and his wife of nearly 45 years, Linda, have three children and five grandchildren.

His father, Alfred, was Marchand’s primary influence in woodworking. “When I was about 10 years old, he let me use a power scroll saw, and from then on I was hooked,” he said, noting that his father also showed him how to maintain hand and power tools.

In 1974 Marchand enlisted in the United States Air Force and became a structural technician at Plattsburgh Air Force Base in New York. He spent about six years with the civil engineering squadron, learning construction methods and techniques with plenty of hands-on experience. “Being in civil engineering also gave me the opportunity to dabble in plumbing, basic electrical and masonry,” he said.

Marchand retired from the U.S. Postal Service in 2019 after 35 years of service; he now drives for Special Services Transportation Agency.

Though he enjoys golf and riding his 1983 Honda Goldwing, Marchand gets special satisfaction from woodworking. “When you build something with your own hands, it gives you a sense of accomplishment. The same holds true for those who grow a garden or repair their car,” he said. “But for me it’s more like therapy. If I am not making sawdust something is wrong! It’s a great way to relax and wind down.”

His workshop is in what used to be the single garage at his raised-ranch home.

There he has a 10-inch Craftsman table saw given to him by his father-in-law and a radial-arm saw with a work table. His newest and “most prized tool” is a 12 x 33-inch wood lathe. “And although my family always laughs when I say this, you can’t have too many clamps! They always come in handy!” he enthused.

Prominent in the workshop is a photo of his father and an article written about him entitled “No gift problems for this man.”

It’s something Marchand relates to, giving gifts. “If it’s not for the house or something for church, what I make is mostly for gifts to family and friends,” he said.

When wood turning, he prefers to use mahogany and maple; when building he favors birch, red oak and cherry.

Asked what goes through his mind when he is working on a project, Marchand replied, “The next step. Sometimes you can get wrapped up in the details and it can feel overwhelming, but when the finished product is sitting in front of me I always think of my Dad and feel grateful for him getting me started with this hobby. I also think of the person who I am making it for and the enjoyment it will hopefully bring.”

He gets ideas from DIY magazines, YouTube and people who ask him to make or fix something. (He has been cleaning thurifers for the Latin Mass Chaplaincy and for his son, Father Marchand, who noted his father has also refinished candle lighters/snuffers, and even repaired wooden cutting boards for rectory kitchens.)

“St. Joseph never speaks a word in scripture; he is the original ‘quiet man.’ My father may not be that demure, but he is a man of few words with a constant presence, dependable,” Father Marchand said.

“Oftentimes people stop to smell the roses or pull off the road to see a beautiful vista as I on occasion do too, but seeing the grain pattern on a smooth piece of lumber is awe-inspiring,” Marchand said. “After all, [God] created that lumber, and I get to see it first-hand and up close. God has given me the opportunity to use my talents to share with others. People really appreciate it when they receive something made by hand or get a squeaky door fixed. I love doing this. It truly is God’s gift to me.”