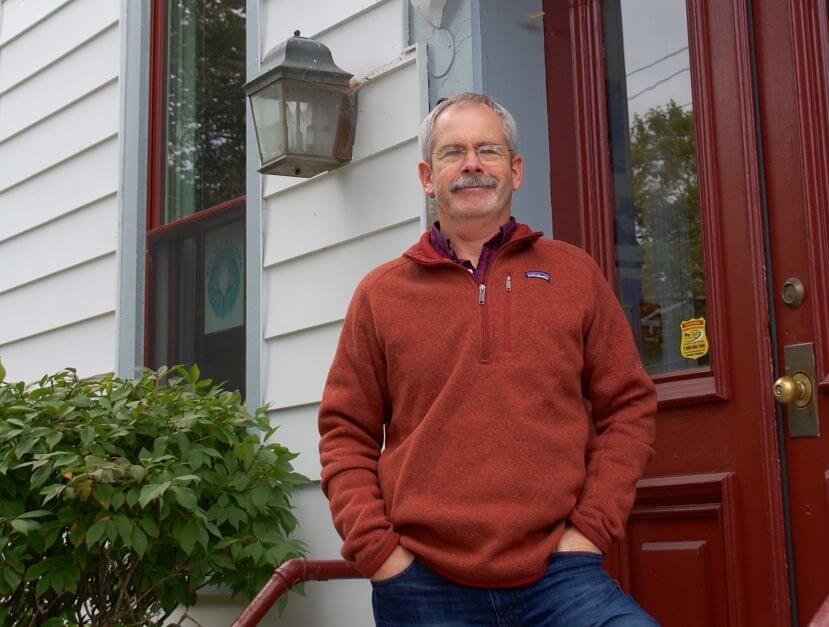 Photo Credit: Vermont Catholic/Cori Fugere Urban - Mark Redmond, executive director of Spectrum Youth and Family Services in Burlington, stands outside the office around the corner from St. Joseph Co-Cathedral which is housing a warming shelter for teens.

St. Joseph Co-Cathedral Parish in Burlington is believed to be the first parish in the Diocese of Burlington to make space available for an overnight warming shelter.

The parish is working with Spectrum Youth and Family Services in Burlington to provide space for 10 cots for homeless young persons from Nov. 6 until the end of March. The space in the parish hall is open from 5 p.m. to 8 a.m. seven days a week.

“Each of us is committed to serving the homeless population during the cold Vermont winters, and I am hoping that our first year in partnership will help to save the lives of young adults who would otherwise find themselves in jeopardy,” said Father Lance Harlow, rector of the co-cathedral and Cathedral of the Immaculate Conception parishes.

According to Mark Redmond, Spectrum’s executive director, the agency had 25 beds available to this young population of homeless persons, but that became insufficient to meet the needs. “We had a wait list, which is terrible,” he said, because that meant some youth had no place to get shelter.

It was his idea to approach the Catholic Church for help, an idea he said Burlington Bishop Christopher Coyne met with a “green light” and referral to Father Harlow.

The co-cathedral space is being used for 17- to 22-year-old homeless persons who can access dinners at other sites and then sleep at the co-cathedral hall. Snacks and a light morning breakfast are provided there, but shower and laundry facilities are accessed at a nearby drop-in center.

“The beauty of it is we’ve got everything nearby, except the beds. The parish hall [has] that,” Redmond said.

Two Spectrum staff members are on duty until 1 a.m. at the parish hall, and one staff member stays awake there from 1 to 8 a.m.

“Those overnight hours will have a minimum impact on the church’s schedule, and if there is a conflict with evening Masses, Spectrum personnel will come in at a later time,” Father Harlow said.

“I am happy to be able to collaborate with Mark Redmond at Spectrum and his staff who are doing excellent work with this [young homeless] population,” Father Harlow said. “It is very much a cooperative ministry. The church has the space and Spectrum has the personnel.”

Asked what the collaboration says about the bishop, rector and co-cathedral parishioners, Redmond responded, “It says they’re awesome.”

Many of the young persons the shelter will serve have lived in poverty or numerous foster care homes. “Most have lived chaotic lives,” are behind in their education, lack job skills and have low self-esteem, Redmond said.

Spectrum offers a variety of programs to help them improve their lives.

“I see great potential in each one of them,” said Redmond, a parishioner of Holy Family/St. Lawrence Parish in Essex Junction.

“The Catholic Church is doing the right thing here,” he said. “It is in line with the corporal works of mercy” to shelter the homeless and feed the hungry.

This story was originally published in the Winter 2017 issue of Vermont Catholic magazine.