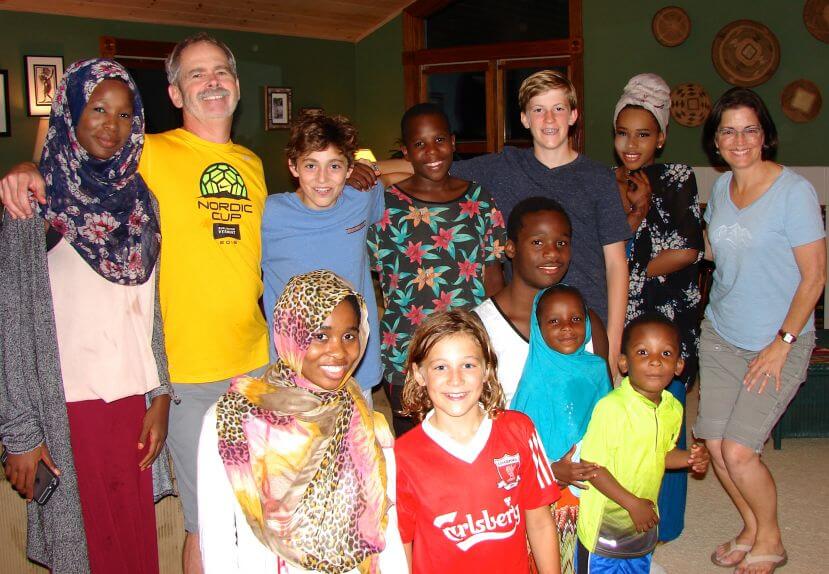 Photo Credit: Submitted photo - A reunion of Redmonds and Arbows (2016) gather along with the family’s step-siblings (front, right) and some neighborhood friends.

Our commitment to host a refugee family in our home and to acclimate them to American life was to last one week.

In 2004, my husband, toddler son and I waited at Burlington Airport as a Somali-Bantu woman named Zahara Arbow came though the arrivals door with a baby knotted to her back. Behind her trailed four youngsters, ages 3, 5, 7 and 9, shuffling in oversized Keds supplied by the resettlement agency.

At the 23rd hour, Zahara’s husband stayed behind in the Kenyan refugee camp where she bore each of her children. So she came as a single mother to Vermont, a name that meant nothing to her other than a place of safety where her children could be educated.

This stoic woman became excited during one of our first drives around town. A translator communicated her question posed to me as she pointed out the window: “Is that the school where my children will go?”

In those first days, I helped round up coats and boots, and prepped the family for the impending cold. The only explanation of the winter season they received prior to resettlement was to hold a small block of ice during an orientation session in the camp. I recall the eldest daughter, Madina, phoning me after the first snowfall, asking if it was safe to go outside; they feared they might die of exposure.

We ferried the family to doctor appointments and grocery stores until Zahara got a driver’s license and purchased her own van. My husband arranged mentors for each of the children.

Through the years, we attended parent-teacher conferences, graduations and college tours and even provided refuge for two of the girls when they got kicked out of the house by their new stepfather.

Why I ever imagined that our hosting commitment would last a week, I don’t know. Thankfully, our connection has continued strong for 13 years to the present day.

Our encounter with this refugee family (they are American citizens now) has been nothing short of life changing for our family. We acknowledge the “First World problems” we used to fuss over, such as dropped cell service or a stained favorite T-shirt. Our expectations about what constitutes a meaningful life have shifted — from acquiring things (we downsized our home recently) to engaging with people; from fulfilling wants to serving needs. We fail miserably at times.

Still, our relationship with this New American family keeps us anchored in what’s most important as followers of Jesus. At no other time in human history have so many people been forcibly displaced throughout the world — some 65.6 million people, with an increasing 20 people per minute.

One of Pope Francis’ signature themes in recent years has been to encourage people of faith to create “cultures of encounter” with refugees and migrants, to fight indifference in ourselves and to share the journey with people outside of our normal lives.

The pope predicts an inner transformation of sorts; I can say with utmost humility, I know of what he speaks.

Originally published in the Winter 2017 issue of Vermont Catholic magazine.