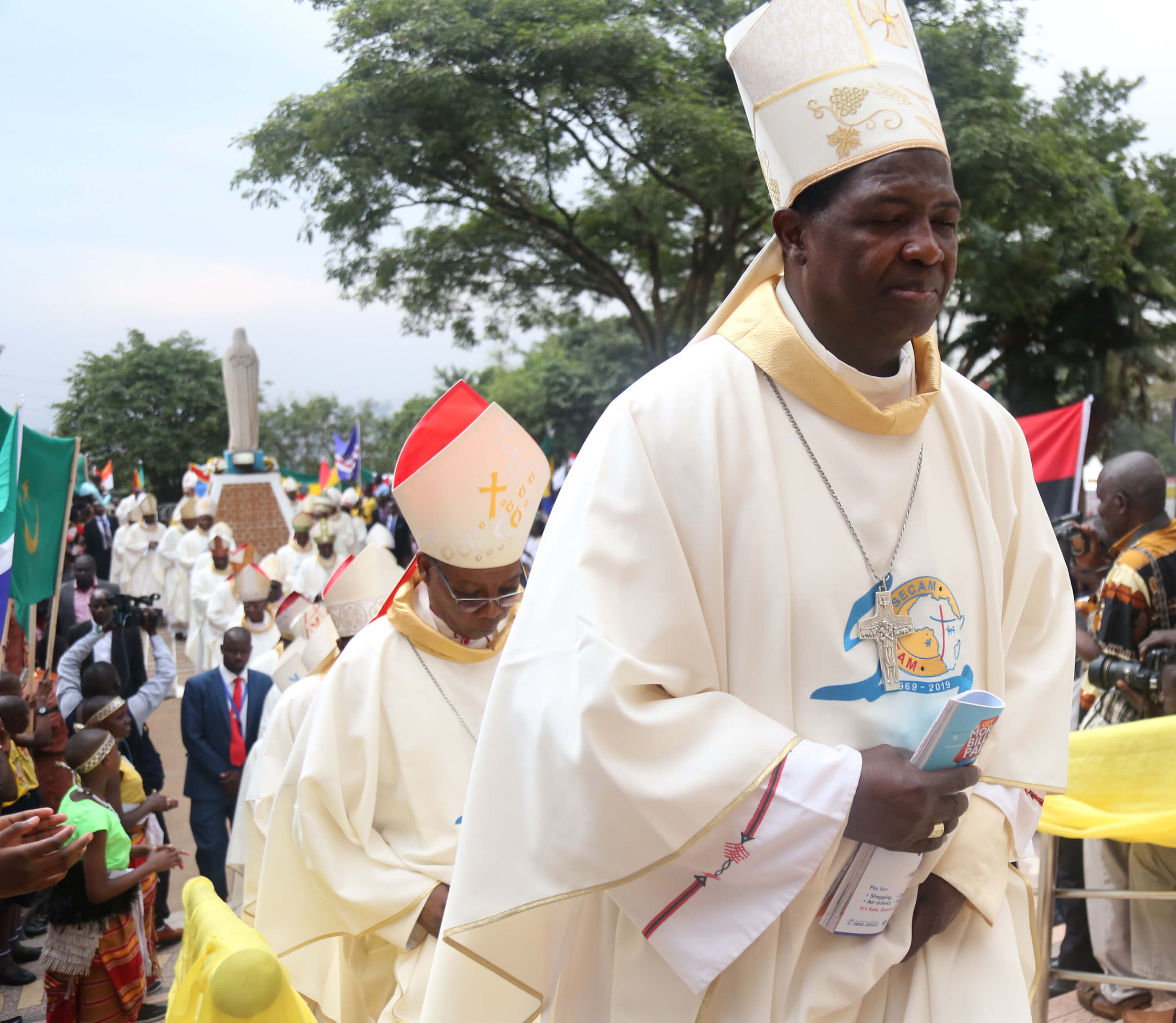 Photo Credit: CNS/courtesy SECAM - Prelates process into St. Mary's Cathedral in Kampala, Uganda, for the opening Mass of the weeklong meeting of the Symposium of Episcopal Conferences of Africa and Madagascar.

The Church in Africa needs courageous Catholics who will become involved in the continent’s challenges, said participants at the 50th anniversary celebrations of the Symposium of Episcopal Conferences of Africa and Madagascar.

About 300 delegates gathered in Kampala, Uganda’s capital, for the 18th plenary meeting of the symposium, known as SECAM. The theme of the July 21-28 meeting is “Church-Family of God in Africa, Celebrate Your Jubilee! Proclaim Jesus Christ Your Savior.”

Evangelization “demands that we proclaim Jesus Christ to others not only with words but, above all, with the witness of life and exemplary conduct,” Archbishop Mbilingi, SECAM’s president, said in his July 21 opening address.

Uganda is where the symposium was created in July 1969 and also where a group of Catholic and Anglican converts “were cruelly martyred at a time when many Africans firmly adhered to traditional religious beliefs,” he said.

Without the “blood of the Ugandan Martyrs,” who were killed between 1885 and 1887, “and other martyrs and holy Africans, Christianity would not have survived in Africa,” he said.

Archbishop Mbilingi urged SECAM members to “speak with one voice” and to defend the pastoral solidarity and “spirit of collaboration and communion throughout the continent.”

Participants should focus on the Kampala Document, a pastoral document that will be formulated at the meeting to guide the church in Africa on pastoral priorities, he said.

“Joining you in thanking almighty God for the many graces received by SECAM and for the fraternal communion that has characterized its work over these 50 years, His Holiness prays that its members may be strengthened in missionary discipleship,” it said.

Archbishop Protase Rugambwa, secretary of the Congregation for the Evangelization of Peoples, told participants the anniversary should be a time for “reflecting on and embracing spiritual and pastoral renewal.”

From “about 40 million Catholics on the continent 50 years ago, we have every reason to celebrate a (current) population of over 178 million,” the SECAM treasurer said.

The Church in Africa “is the fastest growing in the world and also the most vibrant in her liturgical celebrations,” he said.

Many of Africa’s clergy and religious are now serving in countries “that once sent us missionaries,” Archbishop Palmer-Buckle said.

Also, the African Church is “contributing greatly to the integral human development of our peoples” through health care and education, he said.

Celebrating SECAM’s anniversary “requires returning to our African roots of humanity — ubuntu (I am because we are and, because we are, I am),” said Sister Teresa Okure of the Society of the Holy Child Jesus, in a July 22 presentation at the meeting.

The challenges to “God’s church-family” in Africa “stem from the nature of our vast continent with its different religions, language and socio-cultural groupings,” said Sister Okure, the professor of New Testament and gender hermeneutics at the Catholic Institute of West Africa in Port Harcourt, Nigeria.

“In coming to grips with our identity as the church-family of God, we become aware not only of the challenges but also of the wealth of graces God has given us,” she said.

“The unfortunate truth is that most Catholics … do not believe the call to holiness is for them,” Sister Okure said.

“They see themselves as the laity, second-class citizens who must depend on the clergy and, to a certain extent, the religious, to be holy for them,” she said, adding, “We need to come to grips with the stunting effect of this false belief.”

“Let us reject the syndrome that thinks little of self and of things African despite the immense wealth and resources — human, spiritual and material — with which God has endowed this continent in incalculable abundance,” Sister Okure said.

“May we find ways of getting all involved,” she said.