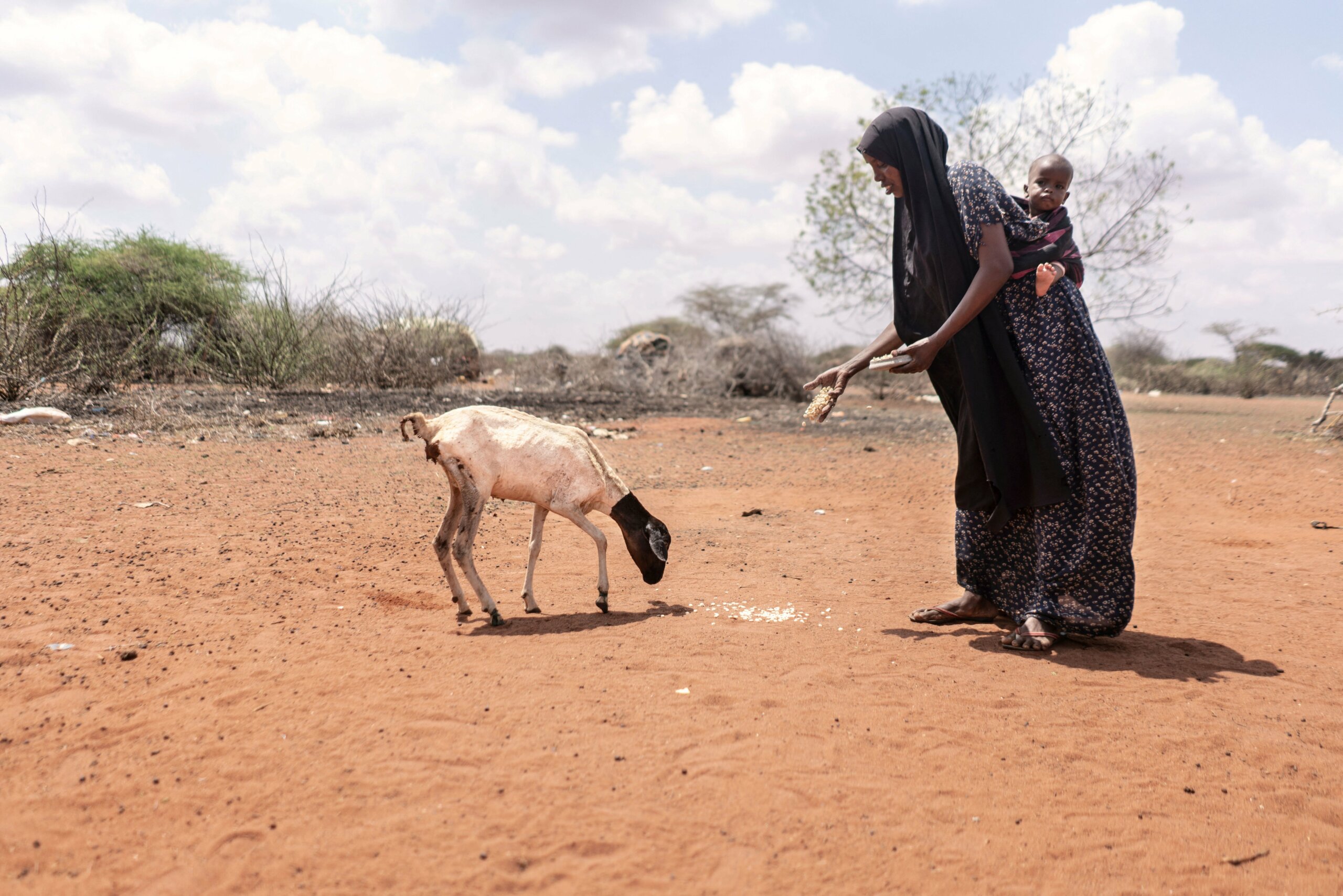 Photo Credit: CNS/World Food Program handout via Reuters - A woman feeds her goat outside her house amid the lack of grazing lands in the drought-stricken town of Wajir, Kenya, Dec. 2, 2021. African bishops said as discussions on climate crisis intensify, land and climate justice must go hand in hand.

As the U.N climate change conference unfolds in the Egyptian city of Sharm el-Sheikh, Catholic bishops in Africa are warning that there cannot be climate justice without land justice.

The bishops of the Symposium of Episcopal Conferences of Africa and Madagascar said Nov. 8 that land, natural resources and the ecosystem were the main sources of subsistence for the people in Africa, but many did not have access to land due to perverse commercial relations and ownership.

At the same time, as the people struggled against the current global climate crisis, they were victims of land and water grabs, experienced pollution of their water and soil by pesticides, and were losing biodiversity and traditional seeds, according to the bishops.

“Communities share the experience that, as they claim their rights to land, they are being persecuted, which is leading to more violent conflicts, despair and instability,” Congolese Cardinal Fridolin Ambongo Besungu, president of SECAM’s Justice, Peace and Development Commission, said in a statement titled, “No climate justice without land justice.”

The cardinal said it was clear the communities would be better if their resources were not captured by powerful people and corporations and given away by weak public institutions.

“We are denouncing false solutions that deprive local communities of their livelihoods, their land rights and tenure. We join communities in mobilizing against ill-advised large-scale land acquisition investments and their struggle against land grabs,” said Cardinal Ambongo Besungu, archbishop of Kinshasa.

“We would like to call all those assembling in Sharm El-Sheikh to remember the call made recently by local communities in their struggle against large-scale land acquisition. As discussions on climate crisis intensify, land and climate justice must go hand in hand,” the cardinal said in the statement.

While expressing solidarity with communities and territories affected by the “land grabs,” armed conflicts and resource wars, the bishops recommended climate actions that prioritize equitable and just changes in agricultural and mining sectors.

They called for the inclusion of Indigenous communities and their leaders as key dialogue partners when large-scale land acquisition projects involve their land.

Church leaders in the Amazon have made similar statements, including at the 2019 Synod of Bishops for the Amazon.

The SECAM statement said a revision of Article 6 of the Paris Agreement on climate change would help tackle the commoditization of land and natural resources and guard against injuring communities’ livelihoods. Article 6 allows countries to voluntarily cooperate with each other to achieve emission reduction targets set out in their nationally determined contributions to carbon credits.

The bishops also urged the Global North to pay its ecological debt and use Indigenous knowledge to design interventions against climate change.

“The culture of integral ecology can counter the culture of irrationality in the face of the climate emergency,” said the cardinal’s statement.