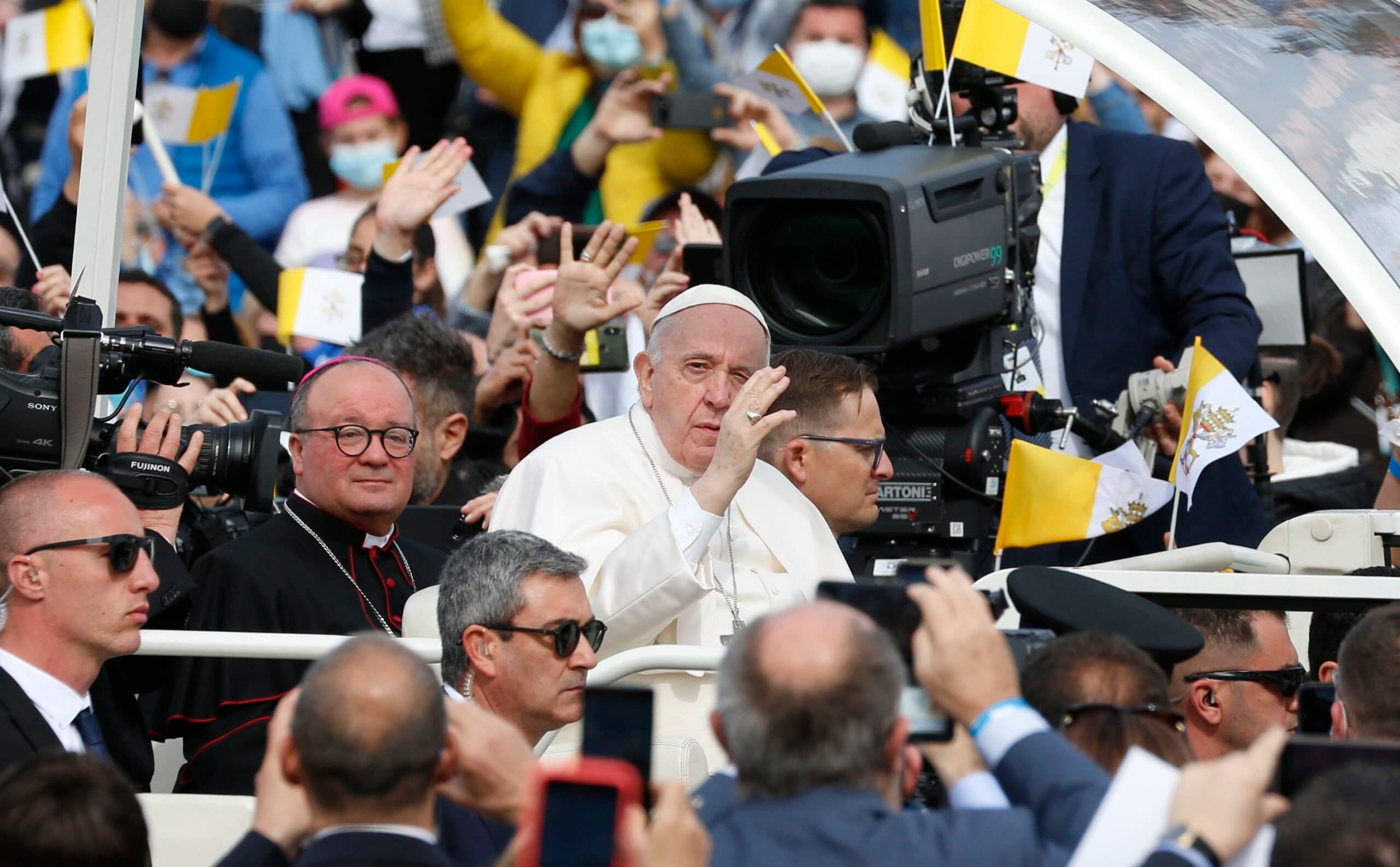 Photo Credit: CNS/Paul Haring - Pope Francis is accompanied by Archbishop Charles Scicluna of Malta as he greets the crowd before celebrating Mass at the Granaries in Floriana, Malta, April 3.

In his brief visit to Malta, Pope Francis once again waded into the migration issue, reminding the country’s people of the “unusual kindness” they are known for while delicately questioning the Maltese government’s controversial policies toward migrants.

During his trip April 2-3, the pope sought a balance between approach and reproach.

And empathizing with Malta, he emphasized the need for a collective effort by Europe to deal with the migration crisis rather than leaving individual countries, especially those closest to Africa and the Middle East, to bear the brunt of the cost.

“Migrants must always be welcomed,” the pope told journalists flying with him back to Rome April 3. “The problem is that each government has to say how many they can receive regularly to live there. This requires an agreement among the countries of Europe, and not all of them are willing to receive migrants.”

“We forget that Europe was made by migrants, right? That’s the way things are, but at the very least let us not leave all the burden to these neighboring countries that are so generous, and Malta is one of them,” he said.

Due to its proximity to North Africa, the Mediterranean archipelago has experienced a large influx of migrants coming to its shores from Libya in recent years.

Current European Union policies have left Malta and other frontline countries such as Italy, Spain and Greece on their own to rescue, shelter, verify and try to integrate the migrants.

However, unlike other European countries, the increase in arrivals prompted Maltese authorities to pursue an agreement with Libya that would allow the Libyan coast guard to intercept and rescue migrants out at sea and return them to Libya, even if migrants are within Malta’s search and rescue area.

Upon their return to Libya, refugees, including women and children, are often shipped to detention centers where, according to Amnesty International, many have been subjected to torture, as well as sexual and physical abuse.

In his first speech in Malta, Pope Francis addressed government and civil leaders and members of the diplomatic corps April 2, applauding Malta’s efforts to assist migrants but also firmly stating that any approach that denigrates the rights and dignity of migrants are an affront to God and humanity.

“Civilized countries cannot approve for their own interest sordid agreements with criminals who enslave other human beings,” the pope said.

However, vulnerable migrants who successfully make it to Malta’s shores don’t fare any better, as one Nigerian migrant, Daniel Jude Oukeguale, told Pope Francis during his April 3 visit to the John XXIII Peace Lab in Hal Far.

Oukeguale told the pope that upon his arrival in Malta, he and other migrants “were put in detention for six months the same night we landed.”

The pope told journalists on his return flight to Rome he was moved by the experiences he heard at the migrant center and once again questioned Malta’s controversial policy of allowing migrants approaching by sea to be forced back to Libya.

At the migrant center, he said, “the things I heard there are terrible, the suffering of these people to get here; and then the camps, there are camps, which are on the Libyan coast, when they are sent back. This seems criminal, doesn’t it?”

Further driving the point home, Pope Francis noted that while refugees fleeing from war and violence in Ukraine are rightly welcomed into Europe with open arms, migrants who come from other countries but face the same difficulties are treated much differently.

“Just as Europe is making room so generously for the Ukrainians who knock on the door, so too (it should be) for the others who come from the Mediterranean,” he said.

Speaking to Malta’s leaders on his first day in their country, the pope made sure to remind them that the Maltese language, which is derived from Arabic, bears witness to the fact that welcoming migrants is a benefit, not a detriment, to the country and its people.

The Maltese language, he said, recalls “the capacity of the Maltese people to generate beneficial forms of coexistence in a sort of conviviality of differences.”

“This is what the Middle East needs: Lebanon, Syria, Yemen, and other contexts torn by problems and violence.” Pope Francis said. “May Malta, the heart of the Mediterranean, continue to foster the heartbeat of hope, care for life, acceptance of others, yearning for peace, with the help of the God whose name is peace.”