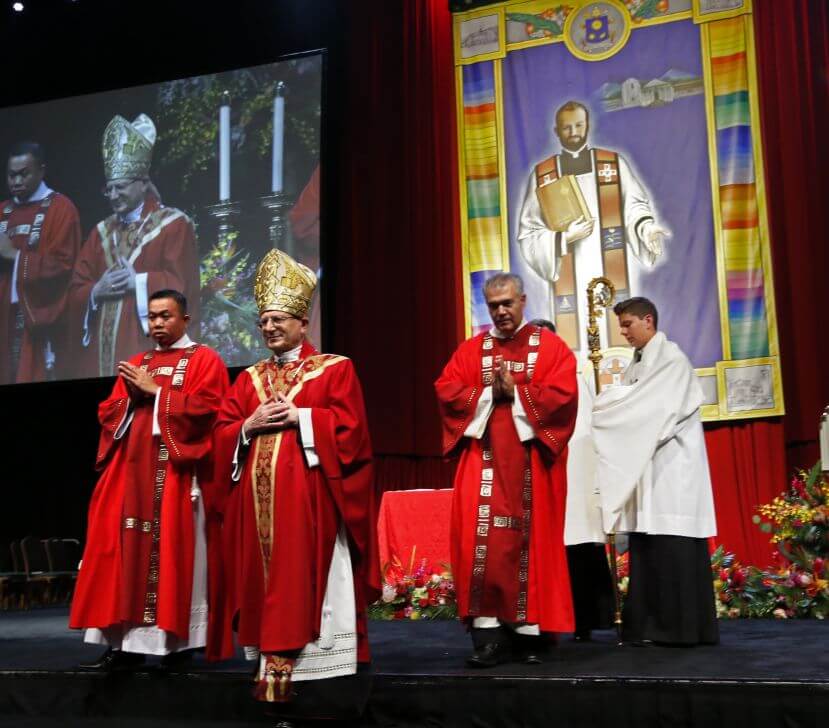 Wearing a red and black traditional Guatemalan shirt that had belonged to martyred U.S. priest Father Stanley Rother, Ronald Arteaga traveled from his village of Santiago Atitlan to witness the Sept. 23 beatification of the pastor he knew as “Padre Aplas.”

Even though Arteaga was only 10 when now-Blessed Rother was martyred in 1981, he remembers “he was always with the people of Santiago Atitlan, Guatemala, and more than that, he identified with our indigenous population.”

The sleeves on Arteaga’s shirt had to be rolled up because, as he recalled, Blessed Rother was a tall man. “He learned to speak Tz’utujil, the language of my people, and he always served the people most in need,” Arteaga said.

When Blessed Rother was killed, Arteaga recalled, it “broke the hearts of the entire village,” but “we had hope that he would receive this honor and thanks be to God that this day has arrived!”

An estimated 20,000 packed the Cox Convention Center from across the country and throughout the world to witness the beatification of the native Oklahoman who would become the first U.S.-born martyr. Ordained for the Archdiocese of Oklahoma City in 1963, Blessed Rother went to the archdiocesan mission in Santiago Atitlan. He was gunned down in his rectory by three masked men in 1981.

Pope Francis recognized the priest’s martyrdom last December, making him the first martyr born in the United States and clearing the way for his beatification.

“We’re amazed at the size of the crowd and delighted so many people are interested in celebrating his life,” said Archbishop Paul S. Coakley of Oklahoma City during a media availability. “He’s a local hero whose reputation goes far beyond Oklahoma.”

Father Don Wolf, a cousin of Blessed Rother, made an appeal for continued support of the missions the martyr served in Santiago Atitlan and Cerro de Oro.

“For the people of his parish in Santiago Atitlan and Cerro de Oro and all of us here in Oklahoma, he has led our eyes unwaveringly to the kingdom of God,” Father Wolf said.

It was for Father Wolf’s ordination in May 1981 that Blessed Rother made his last visit to the United States, which Father Wolf said is a distinction that links his priesthood to his cousin’s.

Francisco “Chico” Chavajay, program coordinator for Unbound Project in Guatemala, was only 1 when Blessed Rother was killed, but grew up in San Pedro, which is near Santiago Atitlan, knowing who “Padre Alpas” was and the impact he had on the community.

“My family benefited from the hospital he founded because one of my sisters went to the hospital when I was eight years old, and we didn’t have access to a closer hospital,” Chavajay recalled. “If it wasn’t for his work, it would probably have been a different story for my sister.”

Chavajay now works for Unbound, an U.S.-based organization founded in 1981 by five lay Catholics, including one who had worked with Blessed Rother in Guatemala. Unbound works with children and the elderly in poor and marginalized communities throughout the world. In Guatemala, Chavajay is responsible for serving more than 60,000 families.

“For us, he’s like an angel we have in heaven to support this cause,” Chavajay said. “We feel that Padre Aplas’ hand and prayers in heaven are helping guide us in this life to continue bringing the Gospel and salvation to our brothers and sisters in need.”

Father Guillermo Trevino traveled from the Diocese of Davenport, Iowa, for the beatification. Serving in an area that relies heavily on agriculture, Father Trevino was impressed at Blessed Rother’s “ordinariness.” The future martyr was raised on his family’s farm about three miles from Okarche.

“The thing is he was so ordinary, but he had great gifts. In Guatemala he’d be working the farm,” said Father Trevino, finding inspiration in his example. In particular, he pointed to a line the late priest uttered that illustrates the devotion he had to his flock: “The shepherd cannot run.” “Can I do this?” Father Trevino has asked himself.

Dolores Mendoza Cervantes knew Padre Aplas in Santiago Atitlan. Her father, Juan Mendoza Lacan, helped him to translate the Bible into Tz’utujil, and was himself killed less than a year later on June 22, 1982. Dolores came to the U.S. at 16 because she had threats on her own life, but pointed out as a result of their efforts, “all the newer generations can read the language.”

She now lives in Danube, Calif., with her husband, Robert Cervantes. They said the government at the time considered teaching the Tz’utujil to read a threat.

“Father Stanley and my father-in-law were brave enough to stand up to them,” Robert said. “They knew they were going to be killed someday, but that didn’t stop them from translating the Bible into Tz’utujil.”