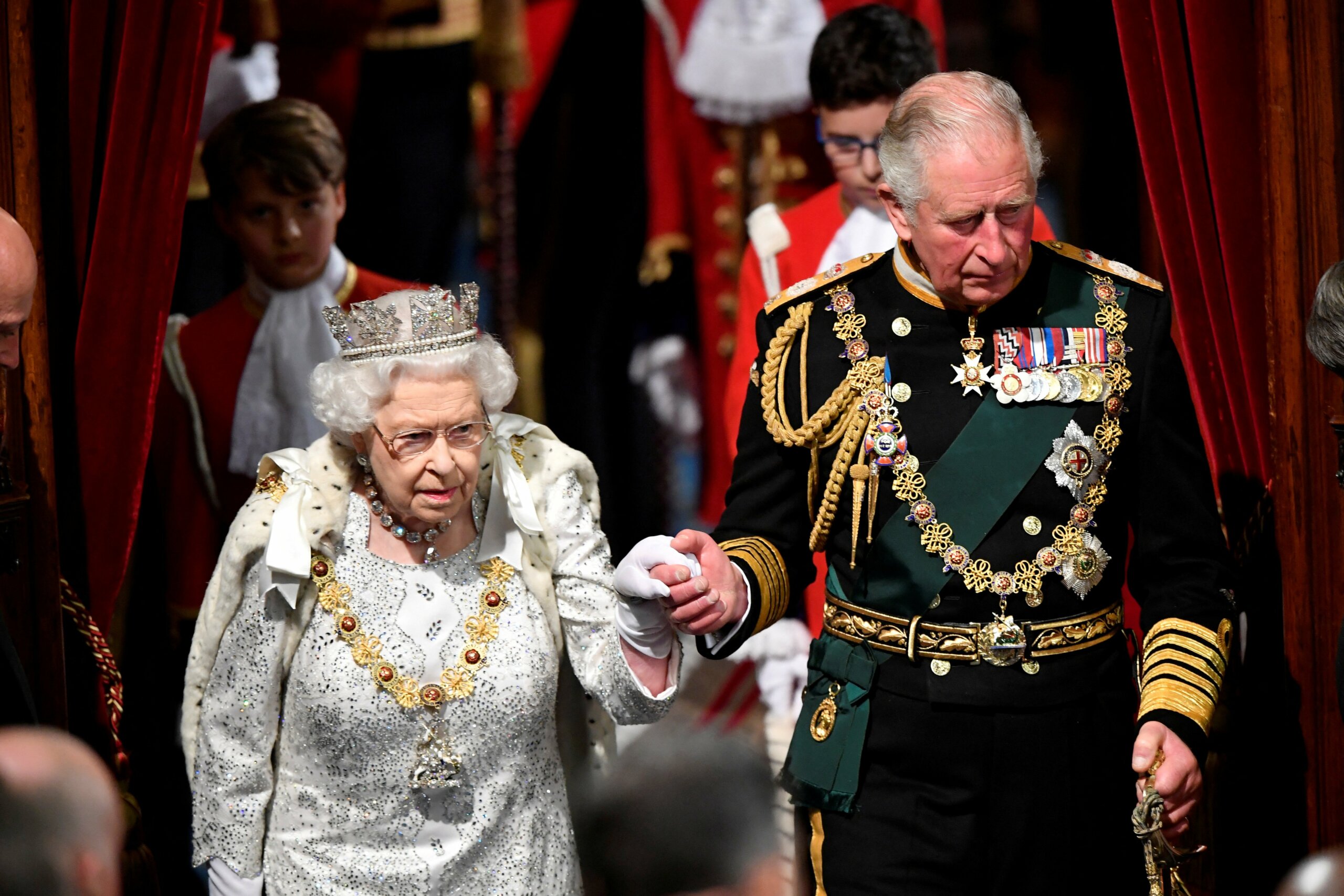 Photo Credit: CNS/Toby Melville, pool via Reuters - Britain's Queen Elizabeth II -- seen arriving at the State Opening of Parliament with Prince Charles in London Oct. 14, 2019 -- died Sept. 8 at the age of 96. The prince, her successor, will be known as King Charles III.

Catholics in the United Kingdom paid tribute to Queen Elizabeth II following her death Sept. 8 and the end of a reign that lasted more than 70 years.

Pope Francis sent a telegram addressed “To His Majesty the King, Charles III,” her son who immediately ascended to the throne.

“I willingly join all who mourn her loss in praying for the late queen’s eternal rest  and in paying tribute to her life of unstinting service to the good of the nation and the Commonwealth, her example of devotion to duty, her steadfast witness of faith in Jesus Christ and her firm hope in his promises,” Pope Francis said.

The British sovereign died “peacefully” at Balmoral, the royal residence in Scotland, surrounded by members of her family. She was 96.

Cardinal Vincent Nichols of Westminster, president of the Bishops’ Conference of England and Wales, paid tribute using many of the queen’s own words.

“On 21 April 1947, on her 21st birthday, Princess Elizabeth said, ‘I declare before you all that my whole life, whether it be long or short, shall be devoted to your service,'” Cardinal Nichols said. “Now, 75 years later, we are heartbroken in our loss at her death and so full of admiration for the unfailing way in which she fulfilled that declaration.”

“Even in my sorrow, shared with so many around the world, I am filled with an immense sense of gratitude for the gift to the world that has been the life of Queen Elizabeth II,” he said. “At this time, we pray for the repose of the soul of Her Majesty. We do so with confidence, because the Christian faith marked every day of her life and activity.”

The cardinal quoted Queen Elizabeth’s Christmas message from 2000, in which she said the teachings of Christ and her own “personal accountability before God” gave her a framework of how to live, and that Christ’s words and example offered her “great comfort in difficult times.”

Cardinal Nichols said: “This faith, so often and so eloquently proclaimed in her public messages, has been an inspiration to me, and I am sure to many. The wisdom, stability and service which she consistently embodied, often in circumstances of extreme difficulty, are a shining legacy and testament to her faith.”

He also offered prayers “for His Majesty the King, as he assumes his new office, even as he mourns his mother. God save the king.”

Bishop Hugh Gilbert, president of the Bishops’ Conference of Scotland, praised Queen Elizabeth for her life of “outstanding and dedicated public service.”

“Her determination to remain active to the end of her long life has been an example of Christian leadership, which demonstrated her great stoicism and commitment to duty and was undoubtedly a source of stability and continuity in times of great change,” he said. “Scotland’s Catholic bishops will remember her in our prayers and pray for all those who mourn her loss.”

Anglican Archbishop Justin Welby of Canterbury said: “As we grieve together, we know that, in losing our beloved queen, we have lost the person whose steadfast loyalty, service and humility has helped us make sense of who we are through decades of extraordinary change in our world, nation and society.”

Queen Elizabeth died 17 months after the death of her husband, Philip, who died in April 2021 at age 99. Her 73-year marriage to Philip was the longest of any British sovereign.

The U.K. has entered a 10-day period of mourning.

Elizabeth was born on April 26, 1926, to Prince Albert, Duke of York, and Lady Elizabeth Bowes-Lyon.

She acceded to the throne Feb. 6, 1952, and during her coronation in Westminster Abbey June 2, 1953, Queen Elizabeth was open about her Christian faith.

“When I spoke to you last, at Christmas, I asked you all, whatever your religion, to pray for me on the day of my coronation — to pray that God would give me wisdom and strength to carry out the promises that I should then be making,” the queen said in her address. “Throughout this memorable day, I have been uplifted and sustained by the knowledge that your thoughts and prayers were with me.”

The accession of 1952 made 2022 the year when the world’s oldest monarch and the longest-serving monarch in British history celebrated the platinum jubilee of her reign — the point when Elizabeth had sat on the British throne for 70 years.

The queen was able to witness the celebrations in her honor but handed over all of her public duties to her nearest relatives. Her final act of office was to receive Prime Minister Liz Truss in Scotland Sept. 6, when she was also last photographed.

Fourteen prime ministers served during her reign, beginning with Sir Winston Churchill. Truss was the 15th to greet her in that office.

The queen sometimes joked about her longevity, once quoting Groucho Marx, saying: “Anyone can get old. All you have to do is live long enough.”

She served as a constitutional monarch — the British head of state and Commonwealth — the supreme governor of the Church of England and head of the British armed forces.

Following her death, King Charles said in a statement: “The death of my beloved mother, Her Majesty the Queen, is a moment of the greatest sadness for me and all members of my family.

“We mourn profoundly the passing of a cherished sovereign and a much-loved mother. I know her loss will be deeply felt throughout the country, the Realms and the Commonwealth, and by countless people around the world.”