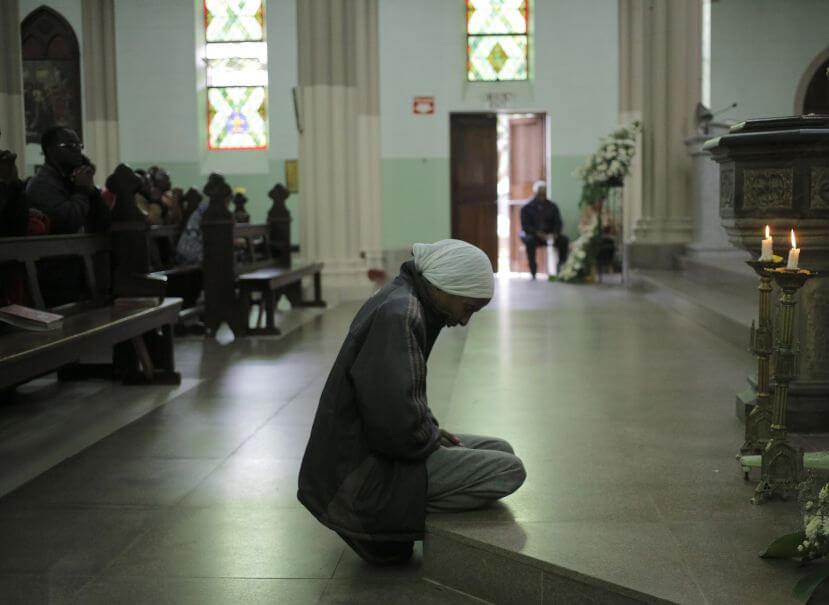 Photo Credit: CNS photo/Kim Ludbrook, EPA - A woman kneels in prayer. The U.S. Catholic Church will focus attention on the plight of persecuted Christians in Iraq and Syria with a day of prayer Nov. 26.

Day of Prayer for persecuted Christians in Iraq and Syria

The U.S. Catholic Church will focus attention on the plight of persecuted Christians in Iraq and Syria with a day of prayer Nov. 26 and a weeklong observance to raise awareness and educate people about their situation.

The effort is jointly sponsored by the U.S. Conference of Catholic Bishops, the Knights of Columbus, Catholic Relief Services, the Catholic Near East Welfare Association and Aid to the Church in Need.

A Day of Prayer for Persecuted Christians Nov. 26 initiates “Solidarity in Suffering,” a Week of Awareness and Education that runs through Dec. 3.

The prayer day falls on the feast of Christ the King, which “is a fitting time to reflect on religious freedom and Christians around the world who are being persecuted in unheard of numbers,” said a USCCB announcement.

“To focus attention on the plight of Christians and other minorities is not to ignore the suffering of others,” said Cardinal Daniel N. DiNardo of Galveston-Houston, USCCB president. “Rather by focusing on the most vulnerable members of society, we strengthen the entire fabric of society to protect the rights of all.”

He made the comments in his presidential address Nov. 13 during the bishops’ fall assembly in Baltimore. He asked the U.S. church to “come together in a special way for a day of prayer for persecuted Christians to express our solidarity with those who are suffering.”

The special awareness week “is an opportunity to inform people about the dire situation facing Christians in places like Iraq and Syria where our faith has been present since the time of the Apostles, but could soon disappear,” said Knights of Columbus CEO Carl Anderson. “It is a time to pray, and to offer help and crucial hope to those who have lost everything but their faith for their faith.”

To help educate Catholics and others about the persecution of Christians, the Knights have organized several events during the week, including a roundtable discussion and talks in New York, Philadelphia and Washington.

The Knights also are sponsoring an evening memorial Mass for victims of Islamic State genocide to be celebrated Nov. 28 by Chaldean Catholic Archbishop Bashar Warda of Erbil, Iraq, at the St. John Paul II Shrine in Washington. The archbishop, who will be in the United States for the week, also will hold a morning news conference Nov. 28.

On Nov. 30 Archbishop Warda will speak at a conference at the United Nations on “Preserving Pluralism and Diversity in the Nineveh Region,” sponsored by the Knights of Columbus and the Vatican’s Permanent Observer Mission to the United Nations.

Since IS invaded Northern Iraq in 2014, the vast majority of Christians in that country have resided within the Archdiocese of Erbil, where Archbishop Warda has overseen a massive humanitarian operation to feed, clothe, shelter, educate and care for this displaced community and those of other faiths also in the church’s care.
Since the defeat of IS in the Nineveh region of Iraq earlier this year, Archbishop Warda has helped oversee the return of displaced people back to their recently liberated homes.

During the awareness week, Knights of Columbus councils throughout the country will work with their parishes to share information about persecuted Christians and the Knights’ efforts on their behalf, including a $2 million initiative to rebuild Karamles, a predominately Christian town in Nineveh that was previously under the control of IS.

A section of the USCCB’s website — www.usccb.org/middle-east-Christians — has a wide array of resources available to assist parishes, schools and campus ministries related to the Day of Prayer for Persecuted Christians and Week of Awareness and Education.

For social media, the hashtag is #SolidarityInSuffering.