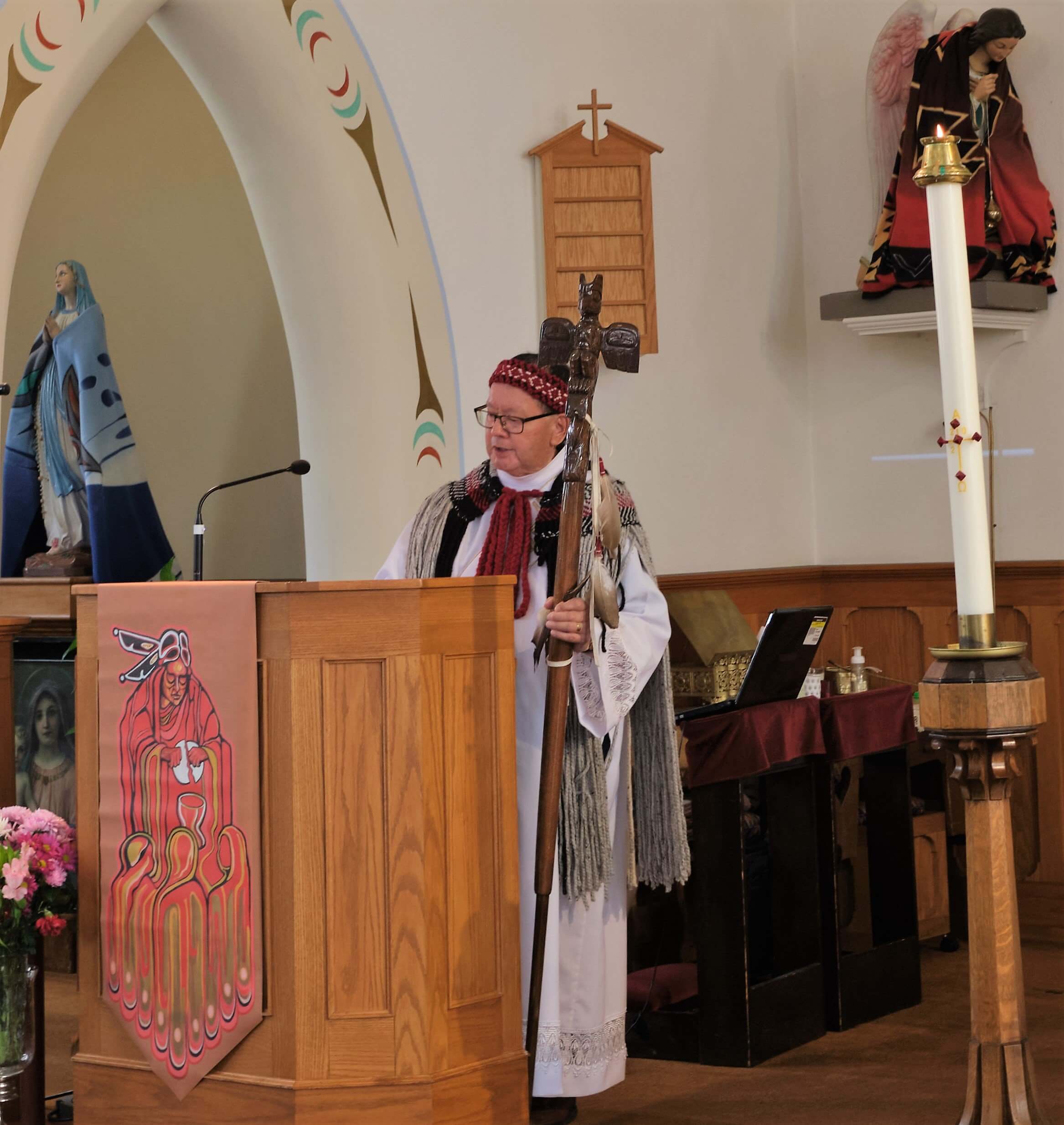 Photo Credit: CNS/Nicholas Elbers, The B.C. Catholic - Deacon Rennie Nahanee holds a traditional Squamish speaking stick with a carved eagle representing a messenger during a presentation at St. Paul's Indian Church in North Vancouver, British Columbia. The parish is making a serious effort to integrate the faith with Squamish traditions and symbols.

Since language provides the foundation for thoughts and culturally roots people in communities, the death of a language means the death of the unique cultural wisdom that it holds.

That concept animates the effort of Squamish Elder and Catholic Deacon Rennie Nahanee to help Catholic members of the Squamish Nation reclaim a cultural heritage he believes was stolen from them by the residential school system — boarding schools the government established to educate and forcefully assimilate Indigenous children.

Parishioners at St. Paul’s Indian Church in North Vancouver have been rediscovering the beauty of the Mass through an ongoing project to translate the liturgy into the Squamish language.

Deacon Nahanee is not a native Squamish speaker. Learning the language late in life, he said, has given him a deeper connection to his culture and a renewed sense of his place in the world.

“It’s our history; our place names; our ancestral names,” Deacon Nahanee told The B.C. Catholic, newspaper of the Archdiocese of Vancouver.

At the heart of Deacon Nahanee’s mission is the desire to have Squamish Catholics make the Mass their own. Deacon Nahanee said a full translation would empower them to better live their faith through the unique expressions of their culture.

“Indigenous people would have a different way of expressing the Gospel,” said Deacon Nahanee. “St. John Paul II said the Gospel does not destroy native culture, it purifies it.”

At St. Paul’s, a serious effort has been made to put this into practice by integrating the faith with Squamish traditions and symbols. The various statues of angels and Mary are draped with “native blankets,” and aboriginal artistic motifs decorate the arches and the ceiling.

When Deacon Nahanee speaks at the ambo, he holds a traditional Squamish speaking stick. On the top of the staff is a carved eagle, a Squamish symbol of power that traditionally represents a messenger.

The eagle “represents everything good in this world,” said Deacon Nahanee, “family, freedom; the ability to go wherever it wants.” For those who understand this, he explained, the presence of the eagle enhances the lector’s role.

Oblate Father Thomas Kurudeepan, St. Paul’s pastor, said the new Squamish translation of the Mass will not be the first time a Mass has been celebrated in Squamish, but it does mark a new self-determined beginning for Squamish Catholics.

“The translations are a way of saying that we are now going to do things our way,” Deacon Nahanee said.

He said it was difficult at first to get people interested in the translation project, but when the congregation heard the Our Father for the first time, it helped them understand what he was trying to do.

“The Lord’s Prayer was really powerful — everyone stopped to listen,” he recalled.

Deacon Nahanee said he is concerned for liturgical accuracy, so the project has not rushed to translate the entire Mass. Instead, priority has been given to those parts of the Mass he thinks would best help connect the community to their faith. For now, the fragmented nature of the translation has required the celebrant to switch frequently from Squamish to English and back.

The translation process began in earnest in August 2021, but it has been slow going. Funding has been a struggle, with the project costing $1,600 so far. The bulk of donations have come from a small patchwork of private donors, including a few non-Catholic churches eager to see the impact the translation will have on reconciliation efforts. Deacon Nahanee said he has paid out of pocket to keep things moving.

Once the Mass has been fully translated, Deacon Nahanee said, the funeral rite should follow. Many community members who don’t otherwise go to Mass attend Squamish funerals, he explained. If they hear the rite in their language, he predicted, it will help heal old residential school wounds and rebuild the connection between Squamish people and the church, which ran many of the schools.

He said he hopes the parish church will someday install an ornate paddle behind the altar to symbolize the Squamish people’s maritime culture.

Deacon Nahanee expresses pride in what has been accomplished: the inclusion of songs and hymns in the Squamish language at Mass offers worshippers a unique cultural experience. He is now working on a new song for the entrance procession — an orca song called “Yew Yews.”

Like the eagle, the orca has special significance, symbolizing transformation and change. Each participant in the procession will wear a gown representing a stage of personal transformation.

Along with snippets of language instruction, such ceremonial elements can help attendants learn about Squamish culture and the unique perspectives it might offer to enrich the faith, he says.