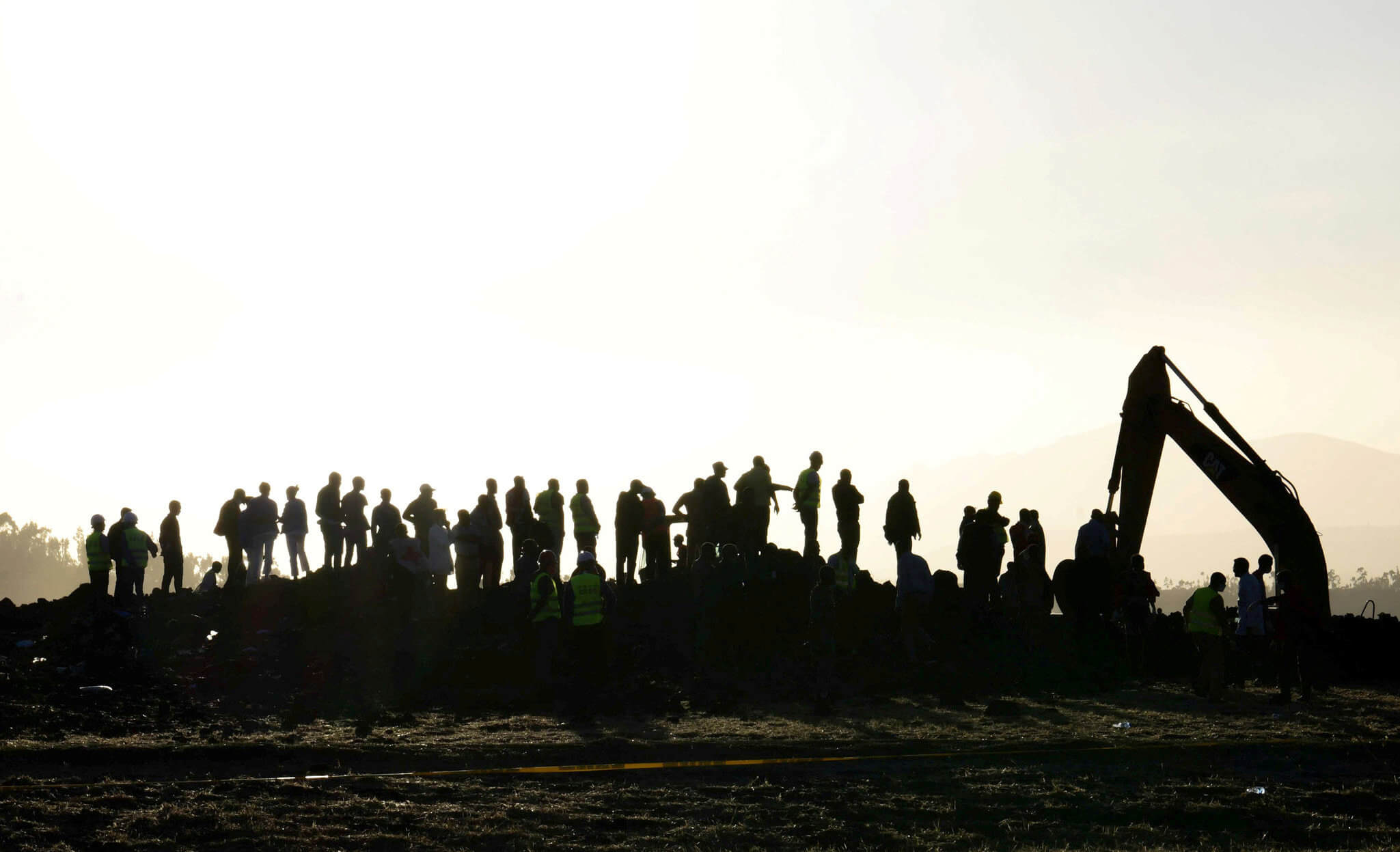 Four Catholic Relief Service staff members on their way to a training session in Nairobi, Kenya, were among the passengers aboard an Ethiopian Airlines flight that crashed moments after takeoff in the east African nation.

The accident March 10 claimed the lives of 157 people on board, many of them from humanitarian agencies.

Others on the jetliner included a Georgetown University law school student who was serving as a campus minister and 19 staff members of U.N. agencies.Two Kenyan religious, Mariannhill Father George Kageche Mukua and an unidentified nun, were also among those killed in the crash.

Pope Francis offered prayers for the passengers from 35 countries in a telegram March 11.

“Having learned with sadness of the Ethiopian Airlines plane crash, His Holiness Pope Francis offers prayers for the deceased from various countries and commends their souls to the mercy of almighty God. Pope Francis sends heartfelt condolences to their families, and upon all who mourn this tragic loss he invokes the divine blessings of consolation and strength,” said the telegram from Cardinal Pietro Parolin, Vatican secretary of state.

In a statement March 11, Catholic Relief Services shared the news of the tragedy involving its staffers, all Ethiopian nationals.

The dead include Getnet Alemayehu, Mulusew Alemu, Sintayehu Aymeku and Sara Chalachew. They worked in various administrative positions for CRS.

“Although we are in mourning, we celebrate the lives of these colleagues and the selfless contributions they made to our mission, despite the risks and sacrifices that humanitarian work can often entail,” CRS said. “Our thoughts and prayers are with their families and all of those who lost loved one as a result of this tragedy.”

Catholic Relief Services is the U.S. bishops’ international relief and development agency. In Washington, Cardinal Daniel N. DiNardo of Galveston-Houston, president of the U.S. Conference of Catholic Bishops, expressed sadness at the “deaths of four of our esteemed colleagues.”

In a letter to Maronite Bishop Gregory Mansour, chairman of the board of CRS, the cardinal said he had asked all bishops in the U.S. to pray for the repose of the souls of the four workers.

“May the consolation of the Savior’s embrace be now a source of comfort to their loved ones and co-workers on this difficult and painful day,” Cardinal DiNardo wrote March 11.

Cedric Asiavugwa, a third-year law student at Georgetown University and campus minister, was among the passengers. A letter sent to the Georgetown community late March 10 said he was on his way home to Nairobi because of the death of his fiancee’s mother.

“With his passing, the Georgetown family has lost a stellar student, a great friend to many, and a dedicated champion for social justice across East Africa and the world,” said the letter from Jesuit Father Mark Bosco, executive vice president and dean at Georgetown’s law school.

The day of the crash, the Ethiopian Catholic bishops also sent condolence and offered prayers “for those who have lost their lives, that they may rest in peace in heaven.”

“We ask our Lord to console the hearts of the families of those who died, all the staff of Ethiopian Airlines and the people of Ethiopia,” said the bishops’ statement, issued in the country’s Amharic language.

A list of the dead released by Ethiopian Airlines included 32 Kenyans, 18 Canadians, eight from the United States and others from China, India, Israel, Saudi Arabia and Somalia.

Aviation officials from Ethiopia were investigating the accident, the second in recent months involving the brand-new Boeing 737 Max jet. In October, a Lyon Air flight killed 189 people in Indonesia.

The plane has been the workhorse for airlines worldwide and has been the company’s best-selling aircraft. China and Ethiopia grounded all flights involving the modern airliner March 11.

Four investigators from the U.S. National Transportation Security Board were dispatched to Ethiopia to assist in the investigation, an NTSB spokesman said March 10.