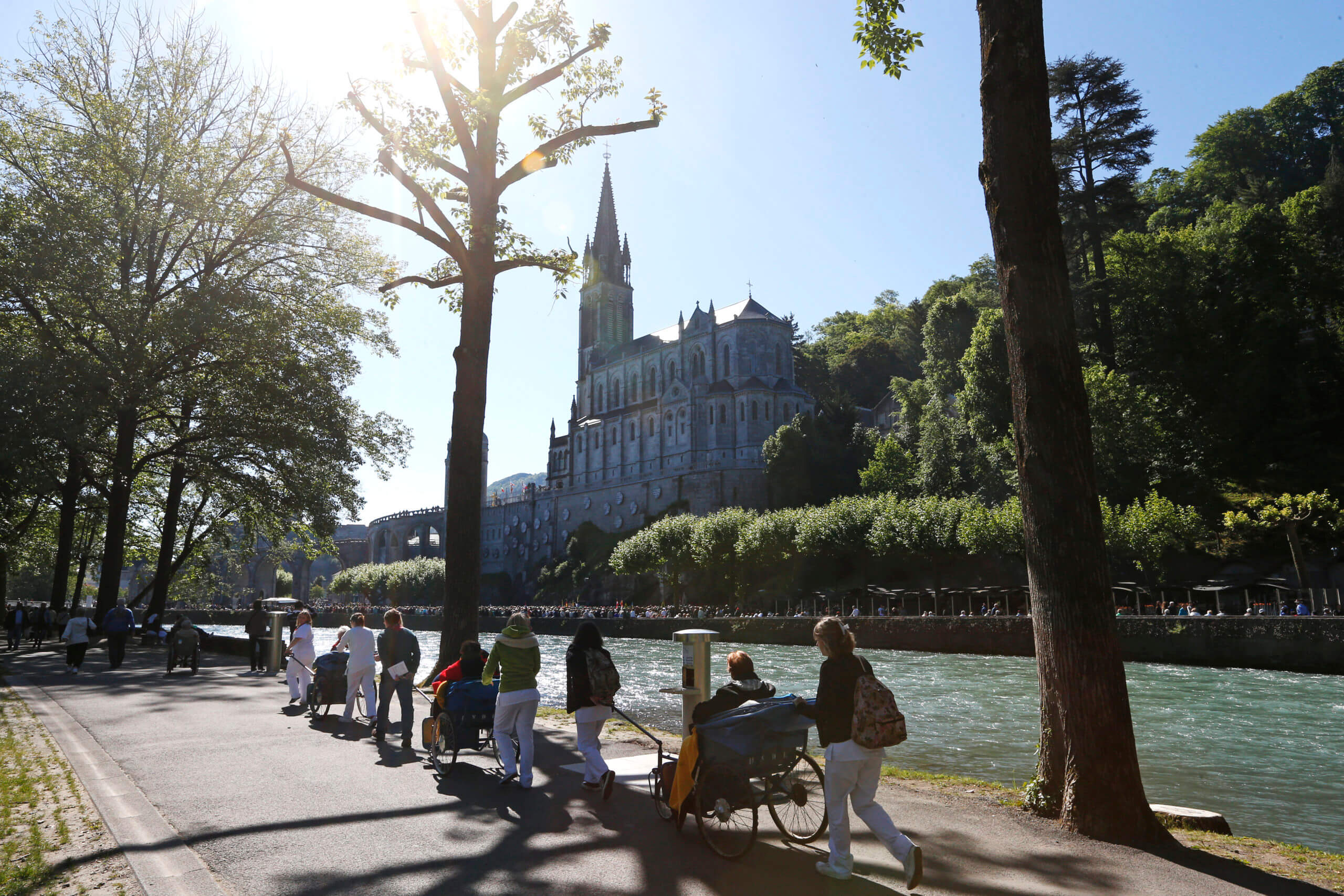 Photo Credit: CNS photo/Paul Haring - Caregivers push the sick and disabled at the Shrine of Our Lady of Lourdes in southwestern France in this May 16, 2014, file photo.

As the number of people testing positive for the coronavirus in Europe continued to grow, the French Shrine of Our Lady of Lourdes announced that pilgrims were still welcome, but the pools the sick bathe in hoping for healing would be closed temporarily.

“Our first concern will always be the safety and health of the pilgrims and the shrine’s working community,” said a note posted Feb. 28 on the shrine’s website. “As a precaution, the pools have been closed until further notice.”

In the center of Rome, the French Church of St. Louis, home of three famous Caravaggio paintings, closed March 1 because a priest who had been resident at the church tested positive for the coronavirus upon returning to France Feb. 28 and was hospitalized. The 42-year-old priest was in satisfactory condition, the Archdiocese of Paris said.

The other two dozen members of the community of French priests at St. Louis were placed under a precautionary quarantine. The members included a priest who worked for Vatican Media in the former Vatican Radio building.

Paolo Ruffini, prefect of the Dicastery for Communication, wrote to Vatican media employees March 2, saying the quarantine was expected to be brief, since the priest who tested positive for the virus left Rome in mid-February; he had traveled to several cities in northern Italy, where the outbreak has been much worse. In addition, the Vatican media employee had no symptoms.

“As a prudential measure,” Ruffini said, the Vatican City health and hygiene service “sanitized and cleaned the office of our colleague and common areas” of the building.

The French Embassy to the Holy See announced late March 2 that Italian health officials had lifted the quarantine on the community at St. Louis Church and that the church would reopen to the public March 4.

Dioceses and religious communities across Europe adopted precautionary measures starting with advising people at Mass not to shake hands during the sign of peace. Many churches emptied holy water fonts and several dioceses recommended Catholics received Communion only in the hand.

Large indoor meetings, conferences and Lenten reflections scheduled for March also were canceled or postponed, including a meeting in Assisi, Italy, March 26-28 called “The Economy of Francis.” The international gathering of young adult activists, economists, scholars and entrepreneurs to discuss creating a more inclusive economy was supposed to include a closing address by Pope Francis. The meeting has been postponed until November.

The Italian civil protection service said 1,577 people in Italy had the coronavirus as of 6 p.m. March 1. A total of 1,694 people had tested positive since the beginning of the outbreak; 83 recovered and 34 people had died. Only about one-third of those who tested positive required hospitalization; the others were being treated at home.