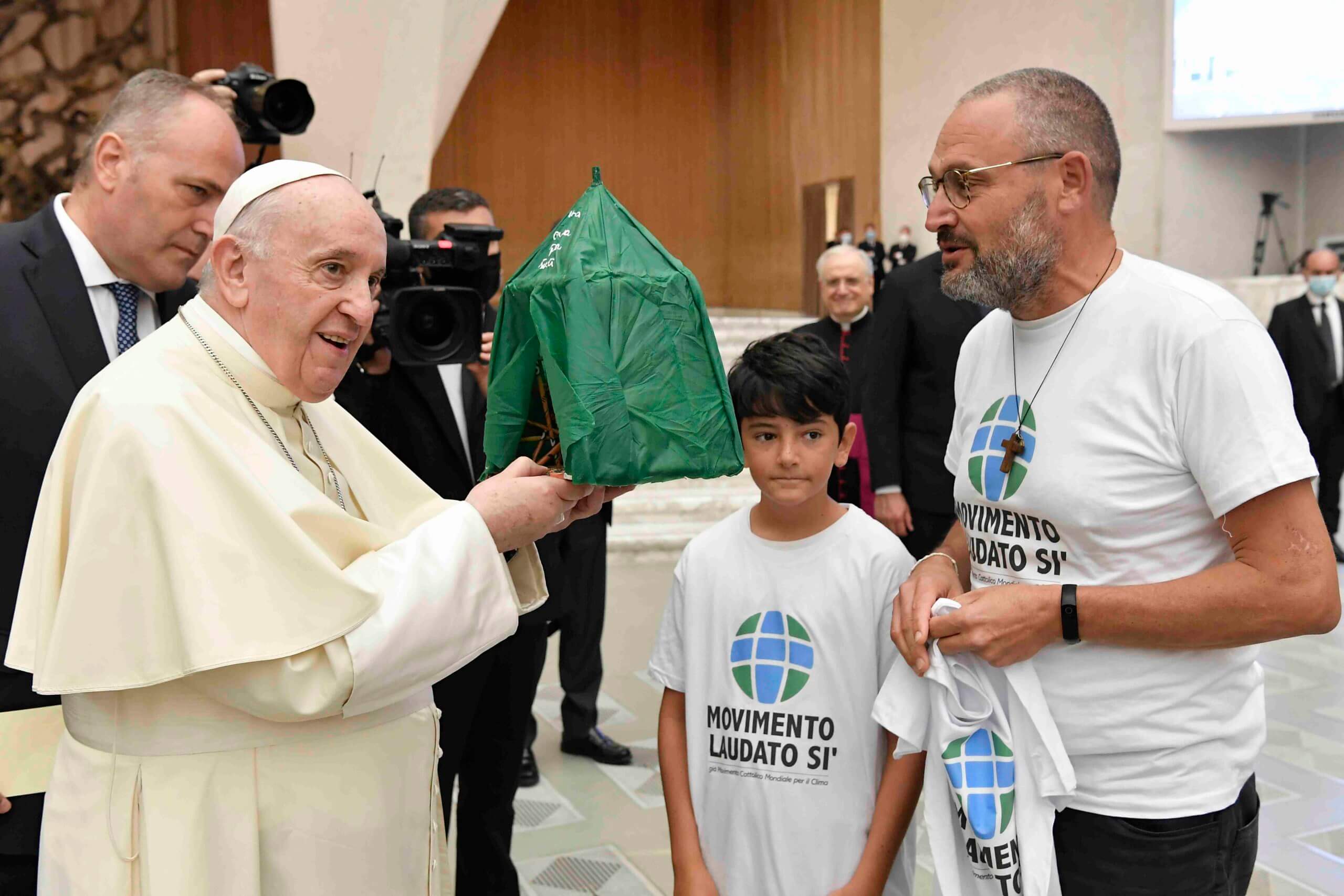 Photo Credit: CNS/Vatican Media - Pope Francis accepts the gift of a handmade "Abraham's tent" during his general audience in the Paul VI hall at the Vatican Sept. 1. The gift was given by members of the Laudato Si' movement.

People should change the way they eat, travel and use natural resources, energy and products so they minimize their harm to the Earth, Pope Francis said.

“Let us pray that we all will make courageous choices, the choices necessary for a simple and environmentally sustainable lifestyle, taking inspiration from our young people who are resolutely committed to this,” the pope said.

In a video message released by the Pope’s Worldwide Prayer Network Sept. 1, the pope offered his prayer intention for the month of September, which he dedicated to “an environmentally sustainable lifestyle.”

The theme this year is “A home for all? Renewing the Oikos of God,” Pope Francis said during his general audience at the Vatican Sept. 1.

He told those gathered that he, Ecumenical Patriarch Bartholomew of Constantinople, an early leader in the Christian ecology movement, and Anglican Archbishop Justin Welby of Canterbury “have prepared a message that will be issued in the coming days.”

“Together with our brothers and sisters of different Christian denominations, let us pray and work for our common home in these times of grave crisis for the planet,” he said at the general audience.

The pope also confirmed that “in principle” he was scheduled to attend the U.N. Climate Change Conference in Glasgow, Scotland, in November, during an interview aired Sept. 1 with COPE, the radio network owned by the Spanish bishops’ conference.

“In principle, the program is that I go. It all depends on how I feel at the time,” he said.

“But, in fact, my speech is already being prepared, and the plan is to be there,” he said, adding that he hoped the summit would increase governments’ commitments “and bring us more in line” with what action is needed to reach the goals of the Paris Agreement on climate change.

The world’s adults need to be inspired by and follow the lead of today’s young people, who are at the forefront of caring for the environment, the pope said in the rest of his video message for the Pope’s Worldwide Prayer Network.

Speaking about his monthly intention for September, the pope said, “It makes me very happy to see that young people have the courage to undertake projects for environmental and social improvement, since the two go together.”

“We adults can learn much from them, because in all matters related to care for the planet, they are at the forefront. Let us take advantage of their example and reflect on our lifestyle, especially during these moments of health, social and environmental crisis,” he said.

“Let us reflect on how the way we eat, consume, travel, or the way we use water, energy, plastics, and many other material goods, is often harmful to the earth,” he said.

He said, “Let us choose to change. Let us advance with young people toward lifestyles that are simpler and more respectful of the environment.”

Young people “aren’t foolish because they are committed to their own future. This is why they want to change what they will inherit at a time when we will no longer be here,” the pope said.