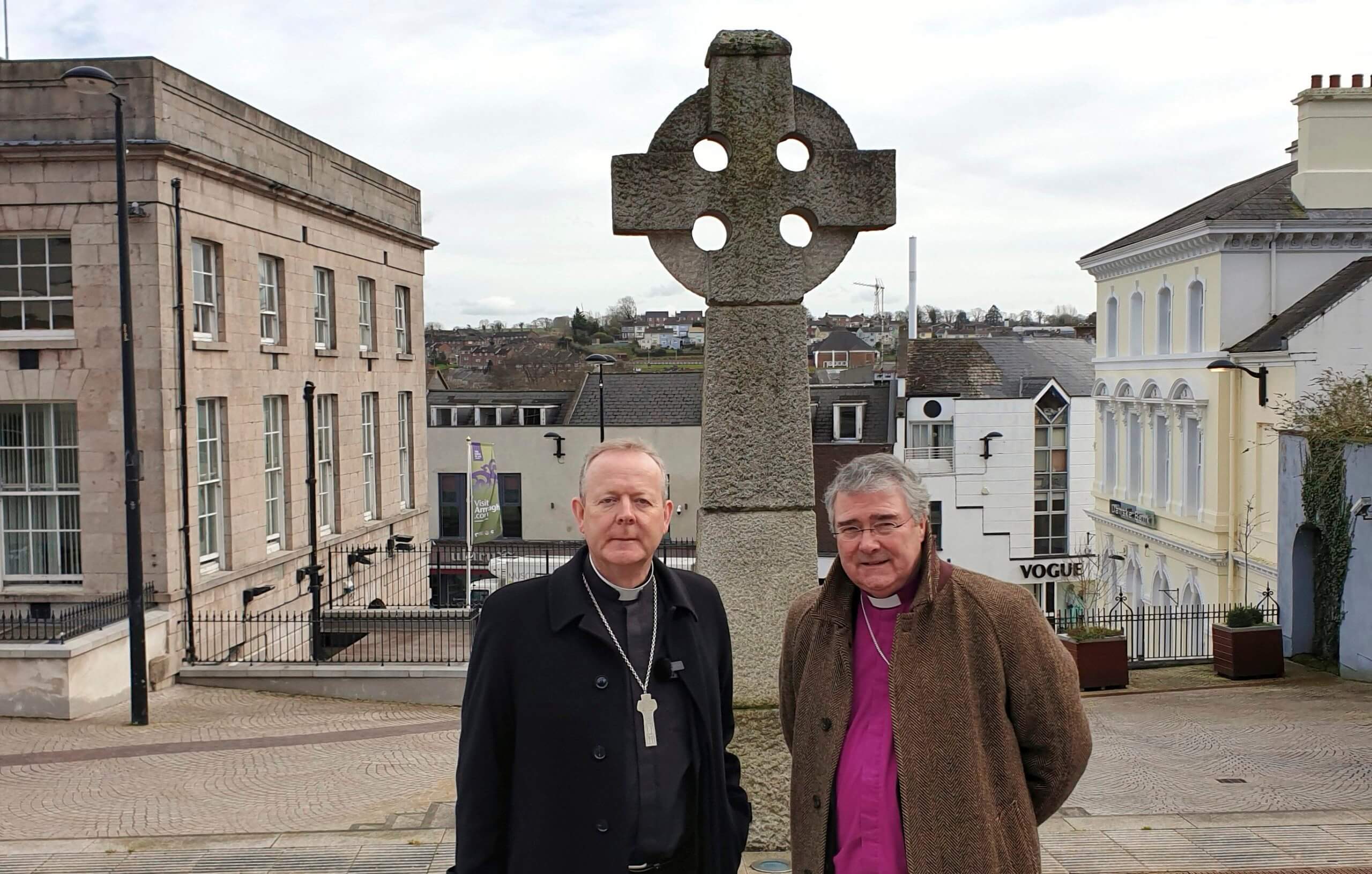 Photo Credit: CNS/Sarah Mac Donald - Archbishop Eamon Martin of Armagh, Northern Ireland, and Anglican Archbishop John McDowell of Armagh are pictured in Market Place Square in Armagh March 16. The two leaders issued a joint message for St. Patrick's Day, saying the war in Ukraine is a lesson to Northern Ireland to never to take peace for granted and never to give up on dialogue.

In a joint message for St. Patrick’s Day, the Catholic and Anglican archbishops of Armagh said the war in Ukraine is a lesson to Northern Ireland to “never take peace for granted” and “never give up on dialogue, the building of bridges, and mutual understanding across historical divides.”

Catholic Archbishop Eamon Martin and Anglican Archbishop John McDowell, whose dioceses straddle both sides of the Irish border, made their comments after they led the annual St. Patrick’s lecture organized by local borough councils.

Armagh is where St. Patrick built a church in the fifth century. Each year, the lecture offers insights on how the witness of St. Patrick speaks to the contemporary world. This year’s lecture was March 16, the eve of St. Patrick’s Day, with the theme, “St. Patrick as a model for reconciliation and peace.”

The two churchmen appealed for an end to the “pointless massacre and pulverizing of the property, bodies and spirit of the Ukrainian people.”

“What is happening today in Europe should help us learn lessons for our own peace process,” they stressed.

Speaking to Catholic News Service, Archbishop Martin said, “We have to learn here on this island from Ukraine about the importance of continuing progress in peace, dialogue and diplomacy. We should never take peace for granted.”

He warned that there was a temptation ahead of elections for party leaders “to lapse back into tribal politics, eyeballing each other from corners, and talking out at each other.”

Elections for the Northern Ireland Assembly are scheduled for May 5; 90 seats across 18 constituencies will be contested.

Archbishop McDowell stressed that peace can only been achieved by “very patient diplomacy over very many years,” particularly where territory is contested.

“We have the Good Friday Agreement, which some people don’t like, but which has served us very well, for a place that has dual identities — or multiple identities now — and multiple ways of expressing its allegiance. To a degree, Ukraine and Russia are a little bit like that,” the Anglican archbishop said.

Archbishop Martin expressed regret that as the world emerges from a global pandemic “which reminded us so strongly of our connectedness and interdependence,” Europe “so easily lapsed into the pointless divisions and devastation of warfare. War is a defeat for humanity. It represents the failure of politics, diplomacy and dialogue.”

The two church leaders called for an immediate cease-fire in Ukraine and an end to the “relentless bombardment, which has trapped countless civilians in a nightmare of destruction and displaced millions of others from their homes and families.” They said they feared that the humanitarian crisis may accelerate before it dissipates.

In their statement, they said it would be “unconscionable for us to celebrate the feast of St. Patrick this year without offering the solidarity of our prayers, charity and welcome for the people of Ukraine.”

They encouraged Christians in Ireland and the Irish diaspora to be inspired by the life and witness of St. Patrick and to be reconcilers and peacemakers.

Parishes north and south of the Irish border are currently identifying possible vacant accommodations to offer Ukrainian refugees, and churches are encouraging parishioners to offer accommodation in their homes.