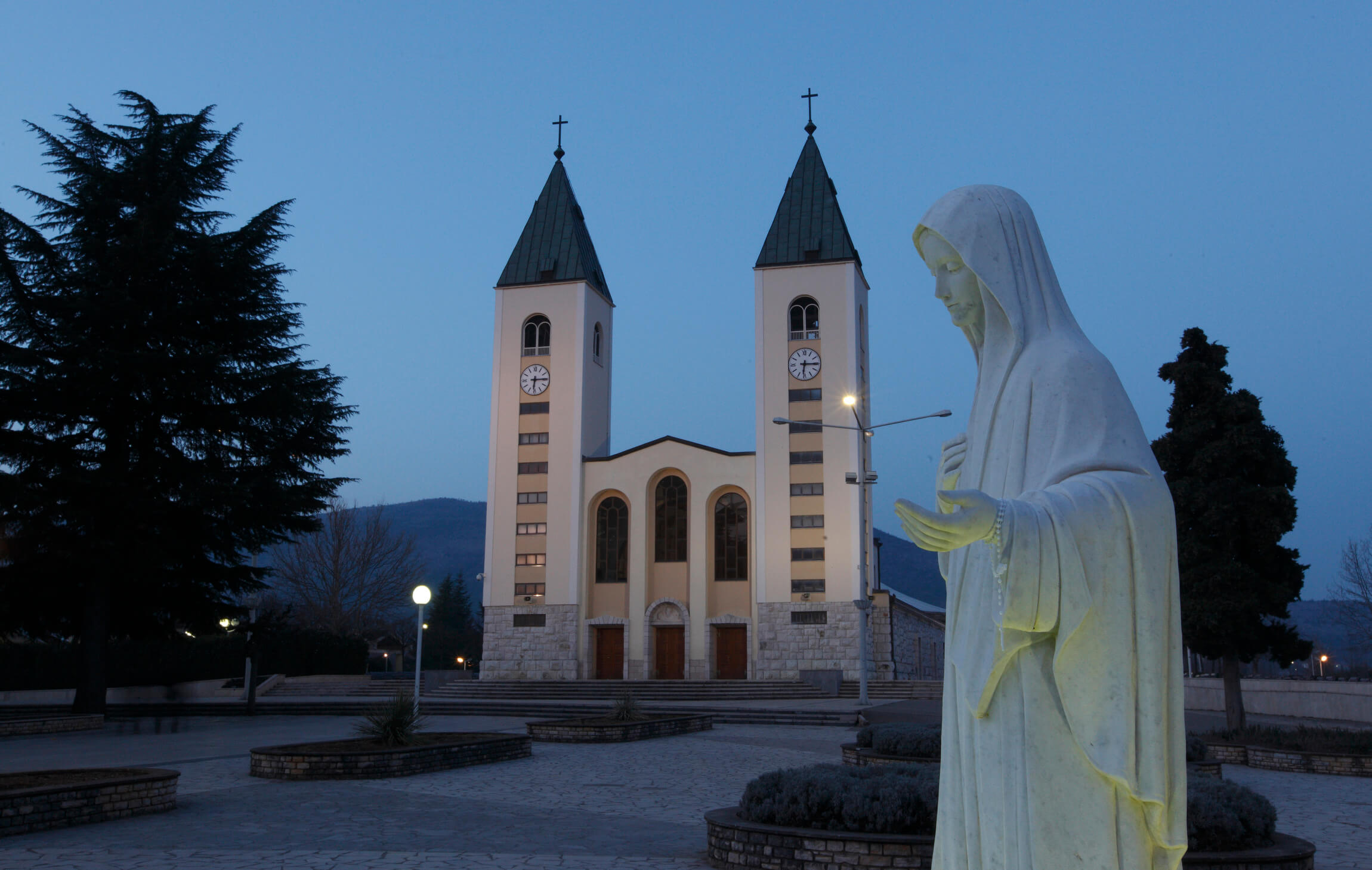 Photo Credit: CNS/Paul Haring - A statue of Mary is seen outside St. James Church in Medjugorje, Bosnia-Herzegovina, in this 2011 file photo. Pope Francis has decided to allow parishes and Dioceses to organize official pilgrimages to Medjugorje; no decision has been made on the authenticity of the apparitions.

Not ruling on apparitions, pope allows official pilgrimages to Medjugorje

Parishes and Dioceses are now allowed to organize official pilgrimages to Medjugorje, Bosnia-Herzegovina, but it must be clear that the Catholic Church has not recognized as authentic the alleged Marian apparitions there.

Polish Archbishop Henryk Hoser, the pope’s apostolic visitor to Medjugorje, and Archbishop Luigi Pezzuto, the nuncio to Bosnia-Herzegovina, announced the pope’s decision to lift the ban on official pilgrimages May 12.

Alessandro Gisotti, the interim director of the Vatican press office, confirmed the change, but said care must be taken to ensure the pilgrimages are not “interpreted as an authentication of well-known events, which still require examination by the Church.”

Therefore, he said, church-sponsored pilgrimages must “avoid creating confusion or ambiguity from the doctrinal point of view.”

In 1981, six young people from Medjugorje claimed that Mary had appeared to them. Some of the six say Mary still appears to them and gives them messages each day, while others say they see her only once a year now.

Diocesan commissions studied the alleged apparitions from 1982 to 1984 and again from 1984 to 1986, and the then-Yugoslavian bishops’ conference studied them from 1987 to 1990. All three commissions concluded that they could not affirm that a supernatural event was occurring in the town.

In 2010, retired Pope Benedict XVI established a papal commission to study the alleged apparitions. The commission’s report has not been made public, although some of its points were revealed after Pope Francis spoke about the commission’s work.

Pope Francis acknowledged that pilgrims to the Marian site deserve spiritual care and support, but he also expressed doubts about claims that the apparitions have continued for more than 35 years.

During his flight to Rome from Fatima, Portugal, in 2017, the pope told journalists that, regarding the Medjugorje commission’s work, “three things need to be distinguished.”

“About the first apparitions, when (the ‘seers’) were young, the report more or less says that the investigation needs to continue,” the pope said, according to the English translation posted on the Vatican website.

The “real core” of the commission’s report, he said, is “the spiritual fact, the pastoral fact” that thousands of pilgrims go to Medjugorje and are converted. “For this there is no magic wand; this spiritual-pastoral fact cannot be denied.”

The decision to allow organized pilgrimages, banned by the local bishops’ in 1991 and confirmed by the Vatican in 1996, recognizes the need to provide spiritual accompaniment and care to the tens of thousands of Catholics who travel to Medjugorje each year, Gisotti said. It also is a recognition of the “abundant fruits of grace” those pilgrims have experienced.