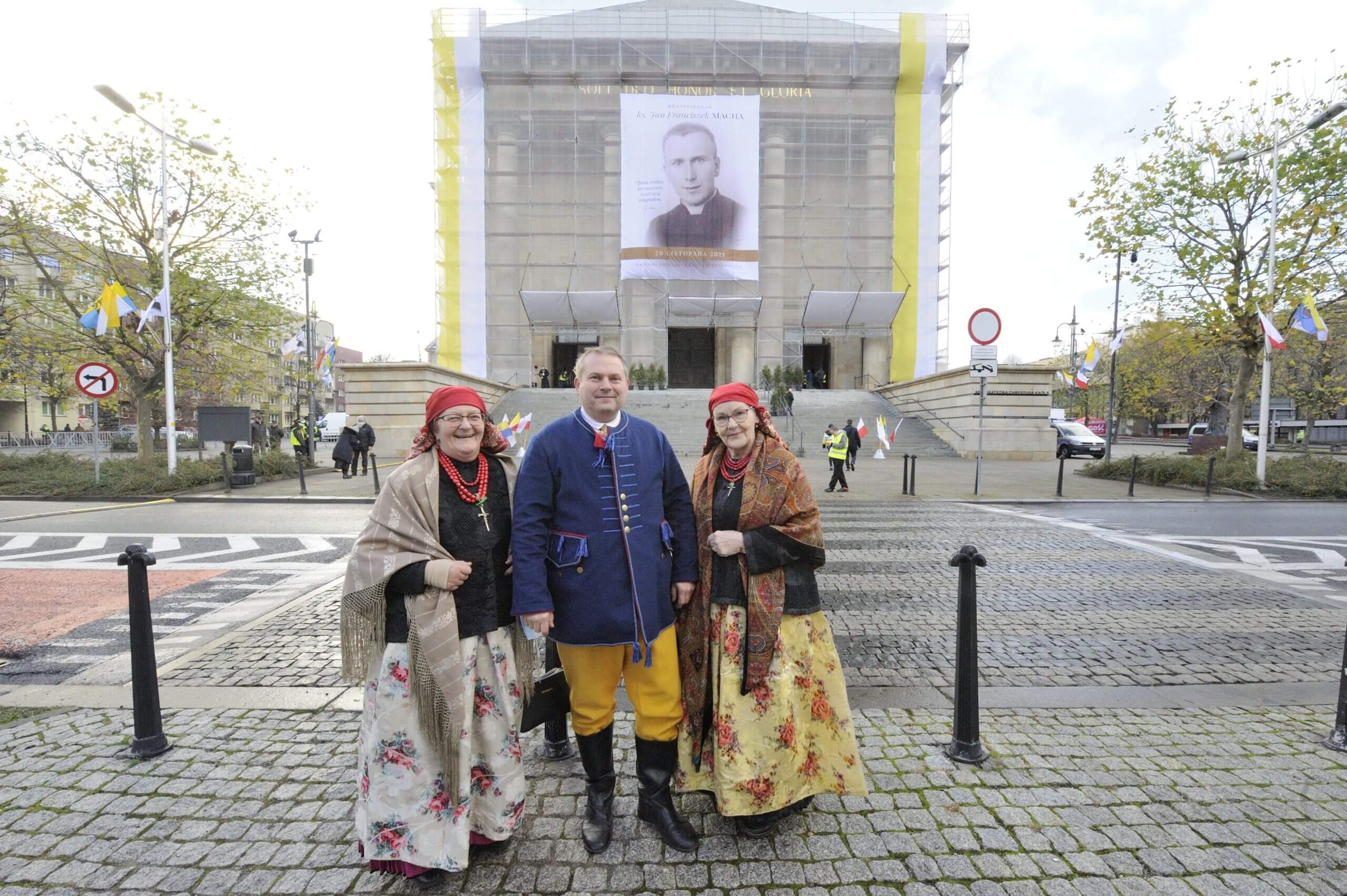 Photo Credit: CNS/Katarzyna Artymiak - Pilgrims dressed in traditional clothing pose near an image of Father Jan Franciszek Macha outside Christ the King Cathedral in Katowice, Poland, Nov. 20. The 28-year-old Polish priest was beatified that day inside the cathedral, 79 years after he was guillotined by the country's Nazi occupiers for links with the underground resistance.

Polish priest killed by Nazis gets step closer to sainthood

A young Catholic priest has been beatified as a martyr in Poland, nearly eight decades after he was guillotined by wartime Nazi occupiers for clandestine charity work.

Blessed Jan Macha “died, like the grain of wheat, killed by a Nazi system full of hatred for those who sow goodness,” said Cardinal Marcello Semeraro, prefect of the Vatican Congregation for Saints’ Causes. “In a divided society, where individualism and selfishness seem to assert themselves due to a lack of authentic and sincere relationships, he reminds us Christ will judge us for the love and good we have achieved.”

The cardinal and six archbishops concelebrated the Nov. 20 beatification Mass in Katowice’s Christ the King cathedral. Polish President Andrzej Duda and members of the priest’s family were in attendance.

Cardinal Semeraro said Blessed Macha’s witness had opened “a truly heroic page of faith and charity” for the Church in Poland’s southern Silesia region, close to the birthplace of St John Paul II.

“While violence and the abuses of war raged in Poland and throughout the world, he understood that only faith and charity allow each person, created in God’s image and likeness, to recognize their inalienable dignity,” Cardinal Semeraro added.

“He took care of many families touched by the nightmare of war, and no suffering left him indifferent. Wherever someone was arrested, deported or shot, he brought comfort and material support, without regard for differences of nationality, religious denomination or social status.”

Relics presented during the Mass included the priest’s handmade rosary and a bloodstained handkerchief recovered from his place of execution, as well as Blessed Macha’s last letter to his parents, written four hours before his death. In the letter, he asked forgiveness but expressed a “clear conscience.”

Born the eldest of four children at Chorzów in 1914, Jan Franciszek Macha studied law at Krakow’s Jagiellonian University after being rejected for seminary studies in 1933. He was accepted for priestly training on his second attempt and was ordained in June 1939.

Interrogated by the Gestapo in early 1940, he was rearrested at Katowice’s train station in September 1941 and sentenced to death in July 1942 after brutal prison treatment for links with Poland’s underground resistance.

Blessed Macha was guillotined Dec. 3, 1942, after his mother failed to obtain a pardon for him in Berlin. The German SS refused burial.

His canonization process was opened by the Katowice Archdiocese in 2013. His beatification was postponed from October 2020 because of the coronavirus pandemic.

In a Nov. 21 Angelus message, Pope Francis said Blessed Macha had been “killed in hatred of the faith” in the context of Nazi anti-church persecutions, adding that “in the darkness of prison,” he had “found in God the strength and meekness to face his Calvary.”

Share This Post
Saints, St. John Paul II, Poland, Steps to Sainthood, Blessed Jan Macha
See More
Last Article
‘The Mystery of the Eucharist in the Life of the Church’
Next Article
St. Albans native makes perpetual profession as School Sister of Christ the King
Back to Vermont Catholic Magazine