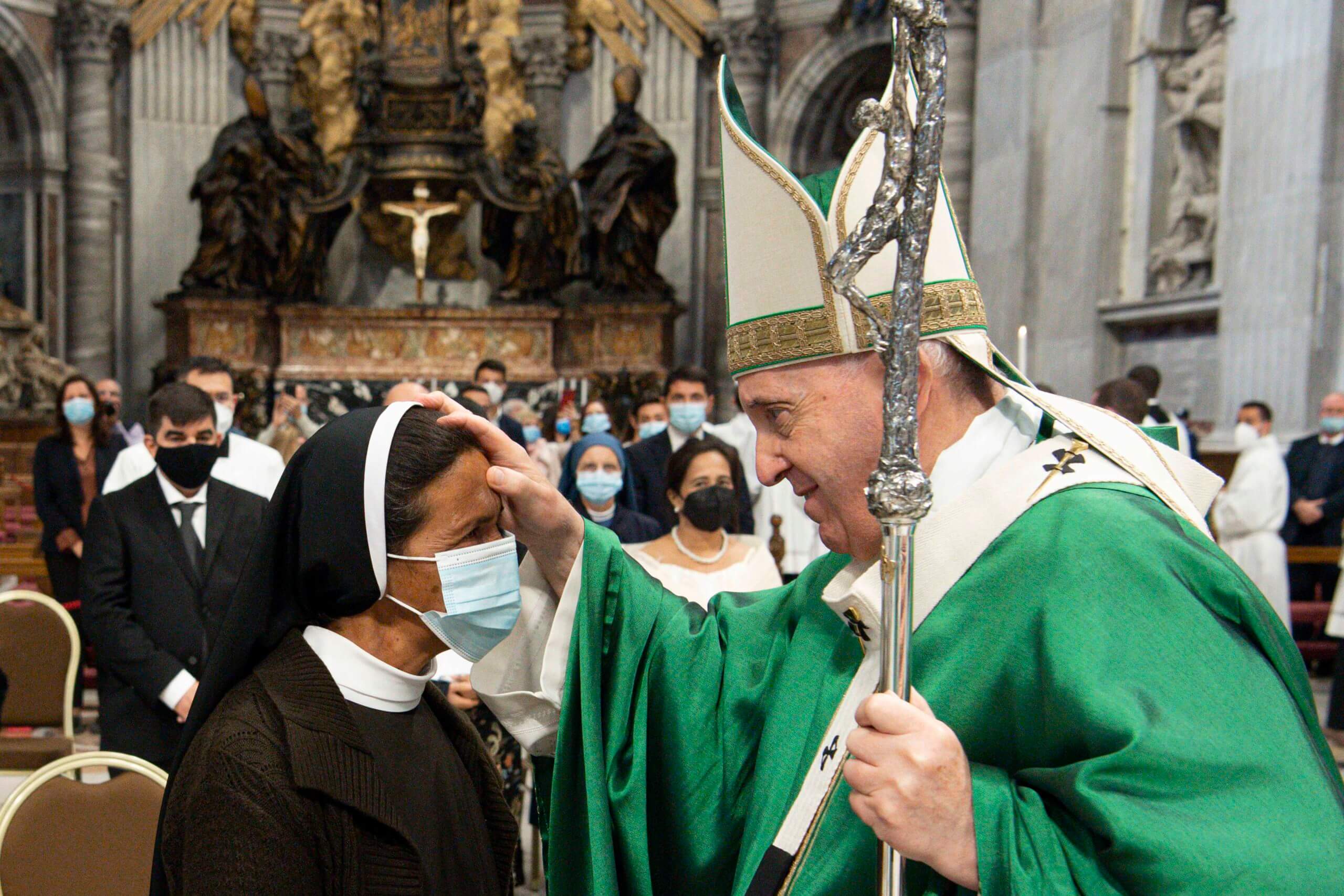 Photo Credit: CNS/Vatican Media - Pope Francis blesses Sister Gloria Cecilia Narváez Argot, a member of the Franciscan Sisters of Mary Immaculate, at the end of Mass Oct. 10 in St. Peter's Basilica at the Vatican. The sister, a missionary from Colombia, was kidnapped in Mali in 2017 and released in early October.

The day after authorities announced her release from kidnappers in Mali, Colombian Sister Gloria Cecilia Narváez Argoti was at the Vatican for a Mass in St. Peter’s Basilica and was greeted by Pope Francis.

The pope greeted Sister Narváez before and blessed her after the Mass Oct. 10, which formally opened the process leading up to the assembly of the Synod of Bishops in 2023.

Sister Narváez, a member of the Franciscan Sisters of Mary Immaculate, had been taken by a group of armed men who broke into the parish in Karangasso village near the Burkina Faso border in February 2017.

She had been working as a missionary for six years in the parish with three other nuns. According to Sister Carmen Isabel Valencia, Sister Narváez offered herself in place of two younger nuns the kidnappers were preparing to take, the French news agency Agence France-Presse reported Oct. 9.

Multiple governments and intelligence services had spent the past four years and eight months working to ensure her safety and secure her release.

The official Twitter account of the presidency of Mali announced her liberation Oct. 9 and praised her “courage and bravery.”

Sister Narváez, 59, appeared on state television the same day with Mali’s interim president, Col. Assimi Goita and Archbishop Jean Zerbo of Bamako, thanking the Malian authorities and the president “for all the efforts you’ve made to liberate me; may God bless you, may God bless Mali.”

“I am very happy; I stayed healthy for five years, thank God,” the nun said, according to AFP.

In a letter sent through the Red Cross in July 2017 to her brother in Colombia, she said she was being held by the “Group to Support Islam and Muslims,” a group linked to al-Qaida and the largest jihadist alliance in the Sahel, said AFP.

They were the same kidnappers who held hostage Italian Father Pierluigi Maccalli, a member of the Missionaries of Africa, who was released in 2020 after two years of imprisonment.

A source close to the negotiations for Sister Narváez’s liberation told AFP she had not been mistreated and that she had learned the Quran during her captivity.

She appeared in a video in early 2018, begging the pope and her Colombian mother superior to intervene. Another video later that year showed her with six other Western hostages.

Colombian Archbishop José Ruiz Arenas, secretary of the Pontifical Council for Promoting New Evangelization, had told Caracol Radio in 2018 that “the Church has been very vigilant, not only in the heart and the prayer of the Holy Father, but also in his concern to seek” her release.

The Franciscan Sisters had collected more than 90,000 signatures on a petition for her release, and the sisters said they ended their work with orphans and famine victims after her disappearance.