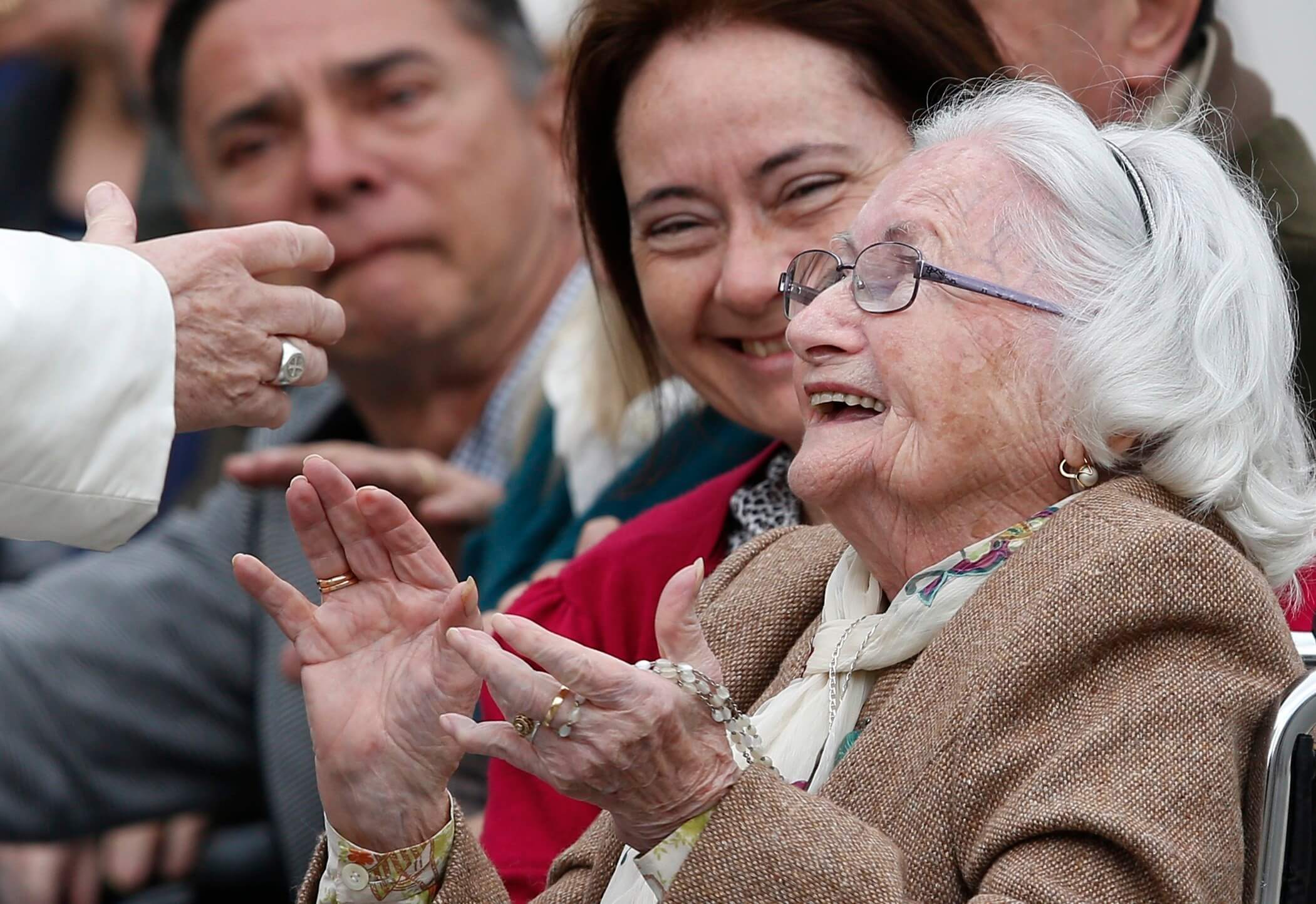 Photo Credit: CNS/Paul Haring - An elderly woman reacts as she meets Pope Francis during his general audience in St. Peter's Square at the Vatican. The pope has chosen the theme, "In old age they will still bear fruit" (Psalm 92:15), for the second World Day for Grandparents and the Elderly July 24.

Pope chooses theme for World Day for Grandparents and the Elderly

Pope Francis is dedicating the 2022 World Day for Grandparents and the Elderly to the importance of inviting older people to contribute to building a better world.

The pope has chosen “They shall bear fruit even in old age” from the Book of Psalms (92:15) as the theme for the second world day, being celebrated July 24.

The theme “intends to emphasize how grandparents and the elderly are a value and a gift both for society and for ecclesial communities,” said a Feb. 15 communique from the Dicastery for Laity, the Family and Life, which was promoting the world day.

The same day, the pope tweeted that elderly “should be cared for like a treasure of humanity: they are our wisdom, our memory. It is crucial that grandchildren remain close to their grandparents, who are like roots from which they draw the sap of human and spiritual values.”

In its communique, the dicastery said this year’s theme “is also an invitation to reconsider and value grandparents and the elderly who are too often kept on the margins of families, civil and ecclesial communities. Their experience of life and faith can contribute, in fact, to building societies that are aware of their roots and capable of dreaming of a future based on greater solidarity.”

“The invitation to listen to the wisdom of the years is also particularly significant in the context of the synodal journey that the church has undertaken,” it added.

The dicastery invited parishes, dioceses, associations and other church communities throughout the world to find ways to celebrate the day. It said it also would make some pastoral resources available soon.

Pope Francis established the World Day for Grandparents and the Elderly, celebrated each year on the fourth Sunday of July to coincide with the feast of Sts. Joachim and Anne, to emphasize the pastoral care of the elderly as a priority. Not only are grandchildren and young people called upon to be present in the lives of older people, but older people and grandparents also have a mission of evangelization, proclamation and prayer, and of encouraging young people in their faith, the dicastery has said.