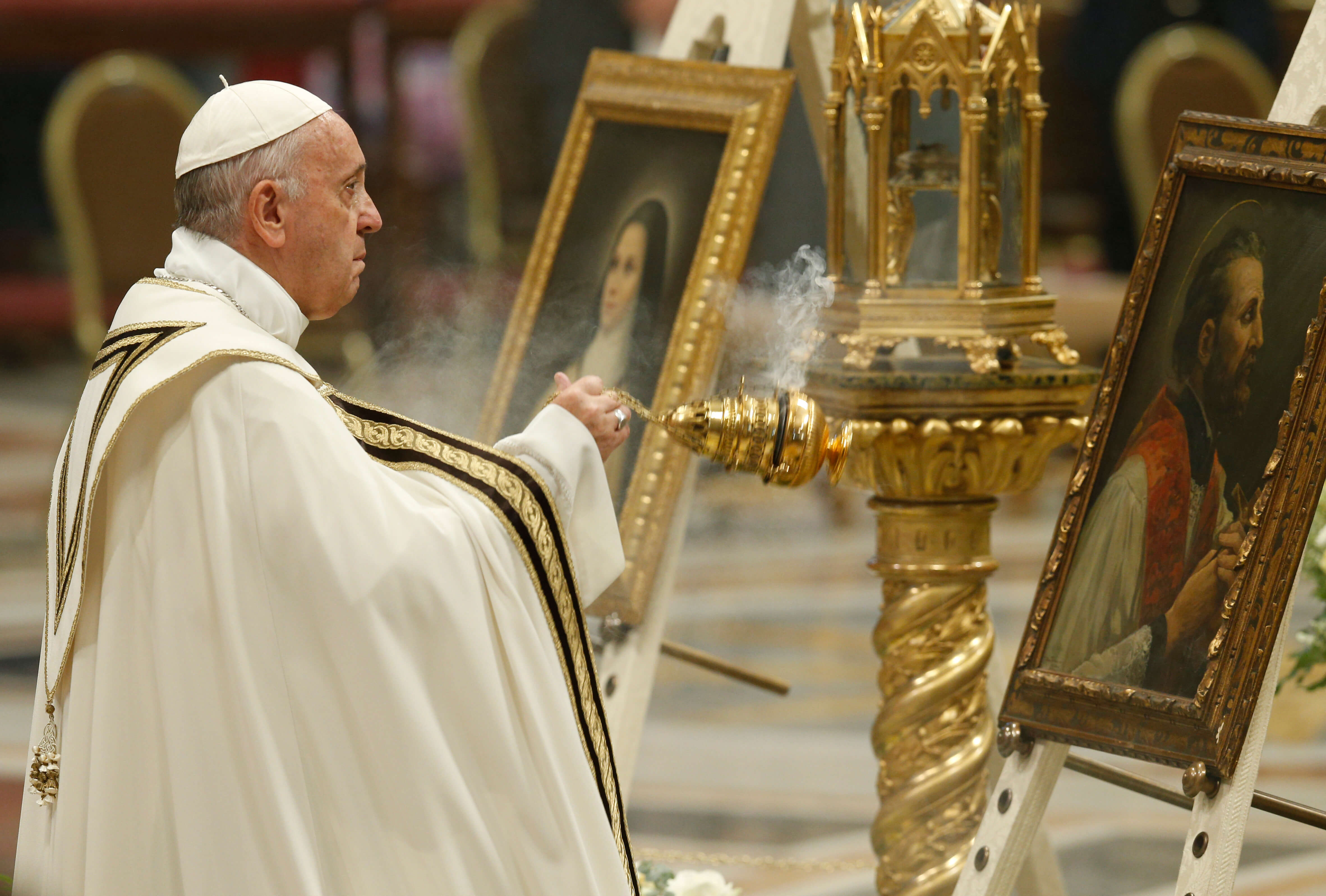 Photo Credit: CNS/Paul Haring - Pope Francis venerates an image of St. Francesco Saverio during a prayer vigil opening a month dedicated to missionaries in St. Peter's Basilica at the Vatican Oct. 1. The pope also venerated the image of St. Therese of Lisieux seen in the background.

God wants everyone to take a risk to share with others the gifts he has given to them — their life, talents and His love, Pope Francis said.

Opening the Extraordinary Missionary Month at a prayer vigil in St. Peter’s Basilica Oct. 1, the pope said God “is asking you not simply to go through life, but to give life; not to complain about life, but to share in the tears of all who suffer.”

Offering his encouragement, the pope said: “The Lord expects great things from you. He is also expecting some of you to have the courage to set out and to go wherever dignity and hope are most lacking,” as there are still many people living without the joy of the Gospel.

Pope Francis called for the special month to remind people of their responsibility to share the Gospel and to proclaim the Gospel with renewed enthusiasm.

Similar to his commissioning missionaries of mercy for the Jubilee of Mercy, the pope commissioned 10 special missionaries at the end of the ceremony, presenting the five religious women, four religious men and a family with a small simple wooden cross to wear around their neck as they go on missions in various parts of Africa and Asia.

God “loves the Church on the go,” the pope said in his homily. “If it is not on the go, it is not Church.”

A missionary Church, he said, “does not waste time lamenting things that go wrong, the loss of faithful, the values of a time now in the past,” he said.

The Church “does not seek safe oases to dwell in peace, but longs to be salt of the earth and a leaven in the world” because she knows her strength is Jesus himself, “not social or institutional relevance, but humble and gratuitous love.”

The pope used the parable of the talents to explain how God entrusts people with his greatest treasures: “our own lives, the lives of others” and a number of different gifts and talents.

God does not want those gifts to be “stored in a safe,” but to be dedicated “with boldness and creativity” to a true vocation that will bear fruit, the pope said.

On the day of judgment, “God will not ask us if we jealously preserved our life and faith, but instead whether we stepped forward and took risks, even losing face,” he said.

The Extraordinary Missionary Month is meant to “jolt us and motivate us to be active in doing good. Not notaries of faith and guardians of grace, but missionaries,” he said.

Like martyrs, missionaries live a life spreading peace and joy, loving everyone, even their enemies, out of love for Jesus, he said.

In the parable, the master is pleased with his enterprising servants as “good and trustworthy” and harshly criticized his fearful servant as “wicked and lazy.”

God severely reproaches the fearful servant because his evil “was not having done good; he sinned by omission,” the pope said.

“Omission is the opposite of mission,” he said. People sin by omission “whenever, rather than spreading joy, we think of ourselves as victims, or think that no one loves us or understands us. We sin against mission when we yield to resignation, ‘I can’t do this: I’m not up to it.'”

“We sin against mission when we complain and keep saying that everything is going from bad to worse, in the world and in the Church,” he said, “when we become slaves to the fears that immobilize us, when we let ourselves be paralyzed by thinking that ‘things will never change'” and when life is lived as a burden, not as a gift, “when we put ourselves and our concerns at the center, and not our brothers and sisters who are waiting to be loved.”

The pope highlighted the lives St. Therese of the Child Jesus, whose feast day is Oct. 1, St. Francis Xavier and Venerable Pauline-Marie Jaricot, who helped lay the foundations of the Pontifical Mission Societies.

By highlighting a religious woman, a priest and a laywoman, the pope said he wanted to show no one is excluded from the Church’s mission.

“Yes, in this month the Lord is also calling you” — fathers, mothers, young people, bankers, restaurant workers, the unemployed, the infirm. “The Lord is asking you to be a gift wherever you are, and just as you are, with everyone around you.”