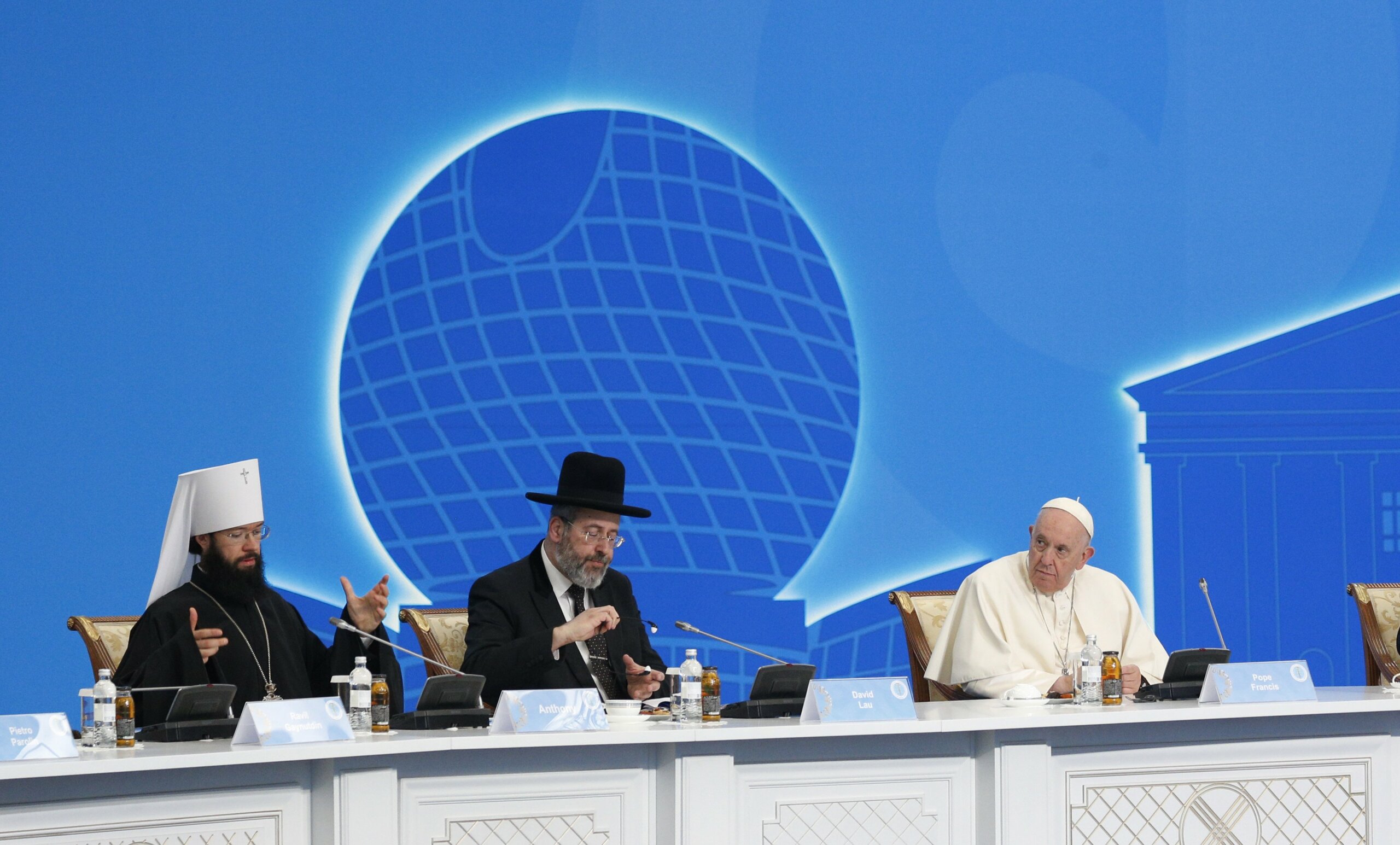 Pope urges world leaders to ‘work for peace, not weapons’

Speaking on behalf of dozens of religious leaders, Pope Francis called on world leaders to put an end to violence and bloodshed and instead strive for peace.

“We plead with you, in the name of God and for the good of humanity: work for peace, not weapons,” the pope said Sept. 15, the final day of the Congress of Leaders of World and Traditional Religions in Nur-Sultan and the final day of his three-day visit to Kazakhstan.

“Only by serving the cause of peace, will you make a name for yourselves in the annals of history,” he said.

The pope joined the 80 religious leaders and hundreds of delegates participating in the interreligious meeting at the Palace of Independence for the reading of the congress’ final declaration.

The declaration, read by Anglican Bishop Jo Bailey Wells of Dorking, England, expressed the leaders’ belief that “extremism, radicalism, terrorism and all other forms of violence and wars, whatever their goals, have nothing to do with true religion and must be rejected in the strongest possible terms.”

“We call upon world leaders to abandon all aggressive and destructive rhetoric which leads to destabilization of the world, and to cease from conflict and bloodshed in all corners of our world,” the leaders said. And they called upon “religious leaders and prominent political figures from different parts of the world to tirelessly develop dialogue in the name of friendship, solidarity and peaceful coexistence.”

Addressing congress participants, Pope Francis said that after the Sept. 11, 2001, terrorist attacks in the United States, a collective response was needed to counter the “incendiary atmosphere” caused by religious extremism that “threatened to turn religion into a grounds for conflict.”

However, “pseudo-religious terrorism, extremism, radicalism and nationalism, dressed up in religious garb, nonetheless continue to foment fears and concerns about religion,” he said.

The congress’ declaration reaffirms that religious extremism, radicalism and terrorism “have nothing to do with the authentic spirit of religion and must be rejected in the most decisive terms possible,” he said.

And, he said, “since the Almighty has created all people equal, regardless of their religious, ethnic or social origin, we are agreed that mutual respect and understanding should be considered essential and indispensable in religious teaching.”

At the same time, the pope said, governments must not exclude the voice of those who adhere to religion but must guarantee that the rights of believers, including to speak publicly, “must be protected, always and everywhere.”

For its part, he said, the Catholic Church is committed to “the unity of the human family” and “the path of interreligious dialogue,” which is “necessary and irrevocable.”

“Interreligious dialogue is no longer merely something expedient,” the pope said. “It is an urgently-needed and incomparable service to humanity, to the praise and glory of the creator of all.”

The pope also told religious leaders that the declaration’s affirmation that the dignity of women and the improvement of their “social status as equal members of the family and of society” is crucial in achieving peace.

“Women must also be entrusted with greater positions and responsibilities,” he said. “How many calamitous decisions might have been avoided had woman been directly involved in decision-making! We commit ourselves to ensuring that women are increasingly respected, acknowledged and involved!”

The voice of young people, who too often fall prey to extremism, also must be heard, Pope Francis said. They must be given “opportunities for education, not weapons of destruction. And let us listen to them, without being afraid to be challenged by their questions. Above all, let us build a world with them in mind!”

“Let us press ahead on this path, walking together on earth as children of heaven, weavers of hope and artisans of harmony, heralds of peace and unity,” he said before heading to the airport for his return flight to Rome.

Share This Post
Pope Francis, World Leaders, Congress of Leaders of World and Traditional Religions, Kazakhstan
See More
Last Article
‘The Blessed Sacrament is at the heart of my priesthood’
Next Article
Obituary: A. Joan Hahr
Back to Vermont Catholic Magazine