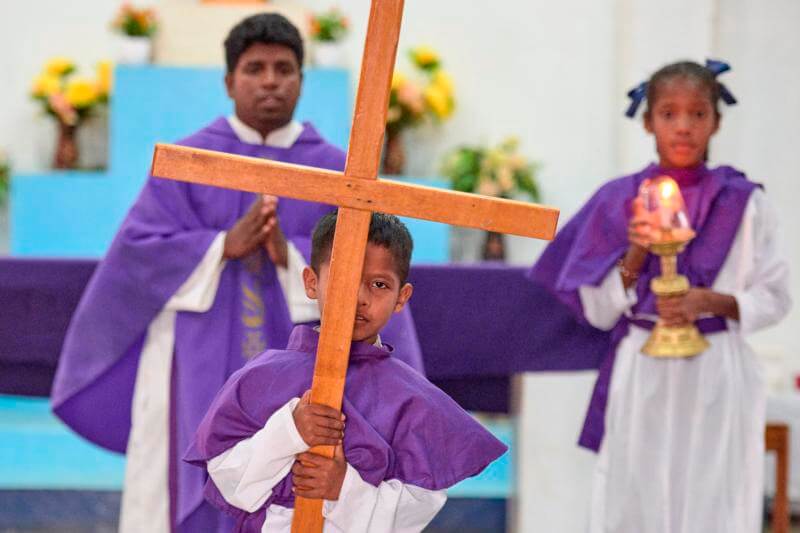 Photo Credit: CNS photo/Paul Jeffrey - An altar server carries the cross out of the sanctuary at the end of Mass in Lethem, Guyana.

Edwina Tancredo last saw her 17-year-old son more than a year ago, when he and some friends left the village of Hiowa to seek work in a mine. A few months later, most of the group returned, but not her son.

“I don’t know where he is,” Tancredo said, looking up from the fish she was preparing for the school lunch in this Macushi indigenous community. “I’m worried about him.”

The story is familiar to pastoral workers in the southern Guyana region known as Rupununi, where most villages are home to Macushi or Wapishana Amerindians, as indigenous people are known in this English-speaking former British colony.

Roads are unpaved and often impassable, jobs are scarce and higher education is just a dream for most young people. The prospect of making a fortune in the gold fields or as a laborer on a distant ranch in the Brazilian heartland is a powerful lure.

“They have this (idea) of coming back with a whole lot of money, buying a car or a (motorcycle),” said Jonathan Joseph, 43, a lay leader in St. Ignatius, a mostly Macushi village adjoining this border town. “But in the end, they come back with nothing, they come back sick, or they lose their lives.”

The son of a Wapishana mother and a Macushi father, Joseph is a member of the village council in St. Ignatius, which became the home of a Jesuit mission in 1909.

“Youth do not want to continue our traditional lifestyle,” he said. “They want a city lifestyle.”

That is just one of the challenges for pastoral work here, said Father Edwin Anthony, a Jesuit missionary from India.

The Takutu River, which forms the boundary between Guyana and Brazil, flows past the mission center where he works. In the simple, round church where he celebrates daily Mass at 6 a.m., a crucifix of Christ with indigenous features, carved by a local artist, dominates the sanctuary.

Although the political boundary split indigenous groups like the Macushi and the Wapishana, the river is not a barrier in the dry season, when people wade across to Brazil — where Macushi are known in Portuguese as Macuxi. That also makes it easy for drugs and other contraband to pass through the region, Father Anthony said.

Labor recruiters also pass through this border town, with its unpaved streets and frontier feel, promising men jobs on ranches in Brazil. Too often, the workers end up indebted to their employers and return home empty-handed. Some young women are lured into the sex trade; others leave to seek work and return home pregnant.

“Young people aren’t aware of what they are getting into,” Father Anthony said. “It’s slavery, actually, even on the part of some families. In order to get some money, (families) let their children go.”

The region is sparsely populated, with widely scattered villages, but even so, violent crime has increased in recent years.

“There is a lot of bottled-up anger,” especially related to family problems, Father Anthony said. “And there is no psychological help.”

“We keep this sort of thing in our community,” she said. “We don’t report it.”

A woman who suffers from domestic violence may fear that the aggressor will retaliate if she reports it, she said. The victim also may worry that she will not be able to support her family if her husband or partner goes to prison, Wenceslaus said.

On a cloudy, breezy morning in early April, Wenceslaus, Tancredo and three other women were at work in a small kitchen in the shadow of a large tree, preparing lunch for eight teachers and 136 children, ranging from preschool age to ninth grade. The village center consists of just a few sparsely furnished buildings: the school, the kitchen and a simple health center with basic equipment.

Nearby, the airy Catholic chapel — built to replace another that blew down during a storm — awaited finishing touches.

The only vehicles in sight were Father Anthony’s pickup truck and a small van that one villager sometimes operates as a bus. Most people travel by bicycle to and from the widely scattered houses — about three dozen in East Hiowa and another 30-odd in West Hiowa.

Although it is part of the Amazon basin, Guyana’s Rupununi region does not match the stereotypical image of dense, damp rainforest. Instead, it is savanna — a flat landscape of reddish soil, dotted with scrubby bushes and tall, conical termite mounds.

It is also a land of extremes. During the rainy season, from April or May through September, downpours turn the earth to mud, and rivers and streams overflow their banks, making roads impassable.

By the time the dry season ends, however, the land is parched, with only the Kanuku Mountains offering green relief. The range is Guyana’s most biologically diverse area, home to iconic wildlife such as the harpy eagle and giant river otter.

The mountains are now a conservation area, but Joseph would like to see them become a national park, with tourism jobs that would offer young people an alternative to working in the mines or on Brazilian ranches.

He and others hope that stricter protection for the mountains, which are the site of an annual Holy Week pilgrimage, would relieve some looming threats.

In early April, toward the end of the dry season, plumes of smoke rose above the ridges, showing where farmers were burning fields in preparation for planting when the rains began.

The concerns of Joseph and other Catholics in Rupununi — education and jobs in rural areas, encouraging Amerindian people to maintain their traditions, and protecting the environment on which villagers’ lives depend — will be on the agenda of the Synod of Bishops for the Amazon, to be held in October at the Vatican.

They also are central to the work of the Jesuit missionaries who emphasize the importance of Amerindian cultures and the environment in their pastoral ministry in Rupununi villages.

“To be here is to be a presence,” Father Anthony said, “where you can help people to appreciate who they are, help them appreciate that as an indigenous person (they) are precious, to have that self-identity and self-esteem.”

Seventh in a 13-part series

Christ our Hope in every season of life Respect Life Month, October 2019 …[T]ogether we may [...]