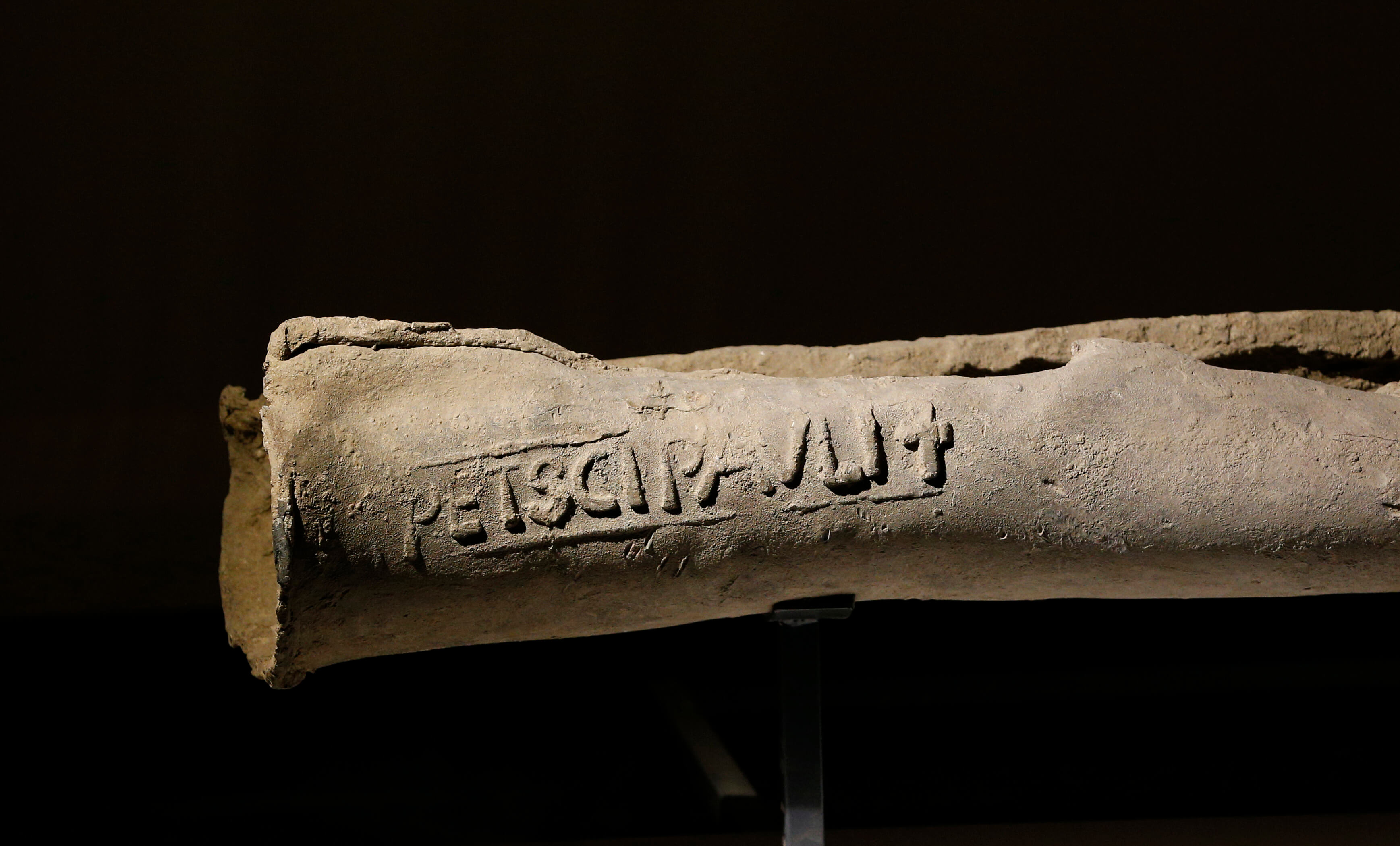 Photo Credit: CNS photo/Paul Haring - A large lead pipe with the Latin inscription, "Sancti Paul", is seen in an archeological site adjacent to the Basilica of St. Paul Outside the walls in Rome Sept. 6. The pipe fed fresh water to a residence for the poor at the site, which contains the remains of structures from late antiquity and the medieval period that were built near the shrine to St. Paul. Unearthed between 2007-2009, the site has recently been upgraded with better lighting and cosmetic changes to improve the appearance.

Turning an archaeological discovery into an appealing, informative site for tourists takes more than just digging interesting remains and ruins out of the dirt.

That’s why experts from the Vatican Museums and the Pontifical Institute of Christian Archaeology turned to a string of outside professionals to help spiff up a site unearthed near the Basilica of St. Paul’s Outside the Walls 11 years ago.

Before the remake, “it looked like a parking garage,” Carolina De Camillis, an architect and lighting designer, told guests at the new unveiling in mid-July.

Located underneath a bookstore and cafe next to the basilica, the 13,000-square-foot archaeological site was surrounded by concrete walls, polystyrene insulation ceiling panels and electrical cables draping every which way, she said.

Her job, she said, was to see “what light could do to bring focus onto the site” while others worked on making the concrete surroundings less distracting.

Giorgio Filippi, an archaeologist and expert in ancient inscriptions at the Vatican Museums, said the dig, which ran from 2007 to 2009, had revealed the remains of “a series of extraordinary buildings,” including the only bell tower from the early medieval period remaining in Rome.

They found evidence of what is most likely one of a number of houses for the poor that Pope Symmachus had built near the basilicas of St. Paul and St. Peter and the Church of St. Lawrence in the sixth century as well as the marble bases of what had been columns supporting almost 2.5 miles of paved and covered walkways and porticoes to provide shade and rain protection to the throngs of pilgrims visiting the tomb of St. Paul.

A large lead pipe which brought fresh water to the residence for the poor was excavated and restored showing an inscription that the plumbing pertained to the complex of “Sancti Pauli” and remains of a brick kiln are testament to the ongoing construction at the once expanding complex.

The walls of an eighth-century monastery were found together with a well and a corridor that may have been the hallway of a dormitory. Right outside the monastery there had been vegetable gardens, an orchard and a small vineyard.

The purpose of the buildings and how the land was used show how the early Church handled and cared for the deluge of visitors and the poor who flocked to the city’s Christian shrines, they said in an article appearing before the site was reopened to the public June 28 — the eve of the feast of Sts. Peter and Paul.

The remodeled site also reveals fresh details of the extensive and intense popular devotion to St. Paul throughout history.

In ancient times, the bustling neighborhood that sprouted up around the shrine grew so crowded with buildings and shops that the sixth-century historian Procopius said marauders would find the place “difficult to attack.”

When the site was first opened to the public in 2013, visitors followed a narrow, elevated metal walkway through a poorly lit area.

The original staging always was meant to be temporary, Utro said at the event. To revamp the site and better protect it from the elements, the museums eventually enlisted the help of architects and designers from Rome’s La Sapienza University, its school of architectural heritage and the Higher Institute for Conservation and Restoration.

The squeaking metal walkway was replaced with spacious wooden platforms. The white walls, ceiling and support columns were colored a dark gray, so they could let the white and light colors of the ruins pop out more, and wires and cables were encased in dark channels.

The same kind of contrasting effect and “a clear sense of space” were made by covering the ground around the ruins with different colored pebbles, said Paolo Monesi, the architect.

The missing columns of the portico were brought to life, he said, by a circular ring of cloth threads hanging from the ceiling down to the marble base with light beaming down from a recessed lighting fixture to make the threads glow and give the illusion of a solid, textured column.

“You don’t need a lot of light, just the right balance between shadow and light,” De Camillis said.

To make sense of the ruins and wall fragments, the museums had a professional illustrator produce full-color renditions of what the area could have looked like during the entire medieval period.

The large detailed images show the evolution of the area — from busy construction and expansion in the fifth to eighth centuries to its gradual decline after the 10th century.

The reopening of the archaeological site, Utro said, “is now another step in the history of this small, but wonderful place.”

Share This Post
Catholic Schools, Evangelization and Catechesis, Pontifical Institute of Christian Archaeology, Vatican Museums, Basilica of St. Paul's Outside the Walls
See More
Last Article
Deacon Garrow ‘Prays it Forward’
Next Article
‘It is not enough to apologize:’ Initial response to the scandals and sin rocking our Church
Back to Vermont Catholic Magazine