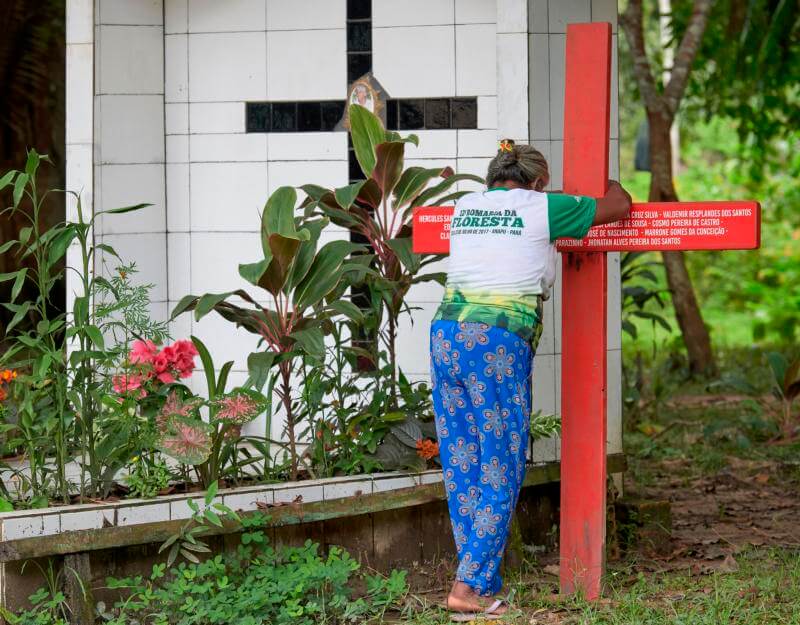 Photo Credit: CNS Photo/Paul Jeffrey - Antonia Silva Lima, a farmer in the Brazilian Amazon, prays at the grave of U.S.-born Sister Dorothy Stang in Anapu, Brazil. Sister Stang was assassinated in 2005. The red cross beside her grave bears the names of 16 local rights activists who have been murdered since her killing. Church activists say the killings continue, and they're about to erect a second red cross with even more names.

The ads were irresistible: The Brazilian government was selling large tracts of property along a new highway in the heartland of Brazil, offering bargain prices to small-scale farmers willing to work the land.

Maria Rosaria Souza Guzzo jumped at the chance. It was 1976, and she and her husband were newlyweds, drawn by the vision of a bright future on the Brazilian frontier.

“They made it sound like paradise,” recalled Guzzo, now 60.

So she and her husband, along with her sister, took off for the promised land.

“But none of what they promised existed,” she said. “There was no paved road, no school, no health center. Nothing. Only bugs and malaria.”

There were just a handful of houses where the town of Anapu is now. The Trans-Amazonian Highway, which would open the Amazon to loggers, miners, ranchers and land speculators, was only a dirt track.

“Working the land” meant hard labor — felling trees to clear a field for crops or a pasture for cattle, then burning the tree trunks and planting. Disillusioned, Guzzo’s sister returned home.

Guzzo and her husband would have done the same, but they had sold everything to buy their land. They tried to sell it but could not find a buyer.

There were conflicts from the very beginning. Disputes over land make the state of Para, the eastern gateway to the Brazilian Amazon, one of the most violent rural areas in the country.

In some cases, the same tract had been sold to three or four people, Guzzo said. Overlapping claims — and sales by people who do not actually have rights to the land — are still a source of conflict today.

“They were five years of suffering and fear,” she said of those early days, as they carved a home out of the forest.

In 1982, she met Sister Dorothy Stang, one of a team of Sisters of Notre Dame de Namur who had moved to Anapu to accompany the farmers. A native of Dayton, Ohio, Sister Stang had worked in Brazil since 1966 and was a representative of the Catholic Church’s Pastoral Land Commission.

“She was very kind and very charismatic,” Guzzo said. “She said that if people organized, this green hell could be transformed into something nice.”

As she listened to the parish team talk about the importance of the Amazon forest for the life of the people living there, Guzzo began to see the land with different eyes.

The farmers organized in an area known as a sustainable development project, or PDS in Portuguese. They would clear one-fifth of their land for farming and leave the rest in forest.

“The idea was to have a collective area that would be easier to defend against invasion” by outsiders, Guzzo said.

But other people also had their eyes on the region. As families like hers cleared their small plots, loggers, ranchers and land speculators began to arrive and force them off their land.

There were other murders before Sister Stang was killed by hired assassins in 2005, but that did not prepare Guzzo for the news of the nun’s death.

“I knew about the threats,” she said, “but I didn’t believe that they would kill her.”

Justice was slow to come in the case of Sister Stang’s murder, just as it is slow — or beyond reach — for many poor Brazilians. Not until 2010 was the person accused of ordering the crime convicted. He was jailed, then freed, and finally ordered back to prison in April 2019.

Guzzo now lives just around a bend in the road from the parish training center where Sister Stang is buried. On their land beside the river, she and her family have built a house and a business — a water park, with swimming pools, waterslides and a snack bar.

She recalled many families who arrived as she and her husband did, some with small children, and who struggled to make a living on the land.

Sister Stang “had great love for the people here,” she said. “She left us a great thing — knowledge of the importance of nature. She helped many people understand that we have to be united in the defense of life.”

Fourth in a 13-part series