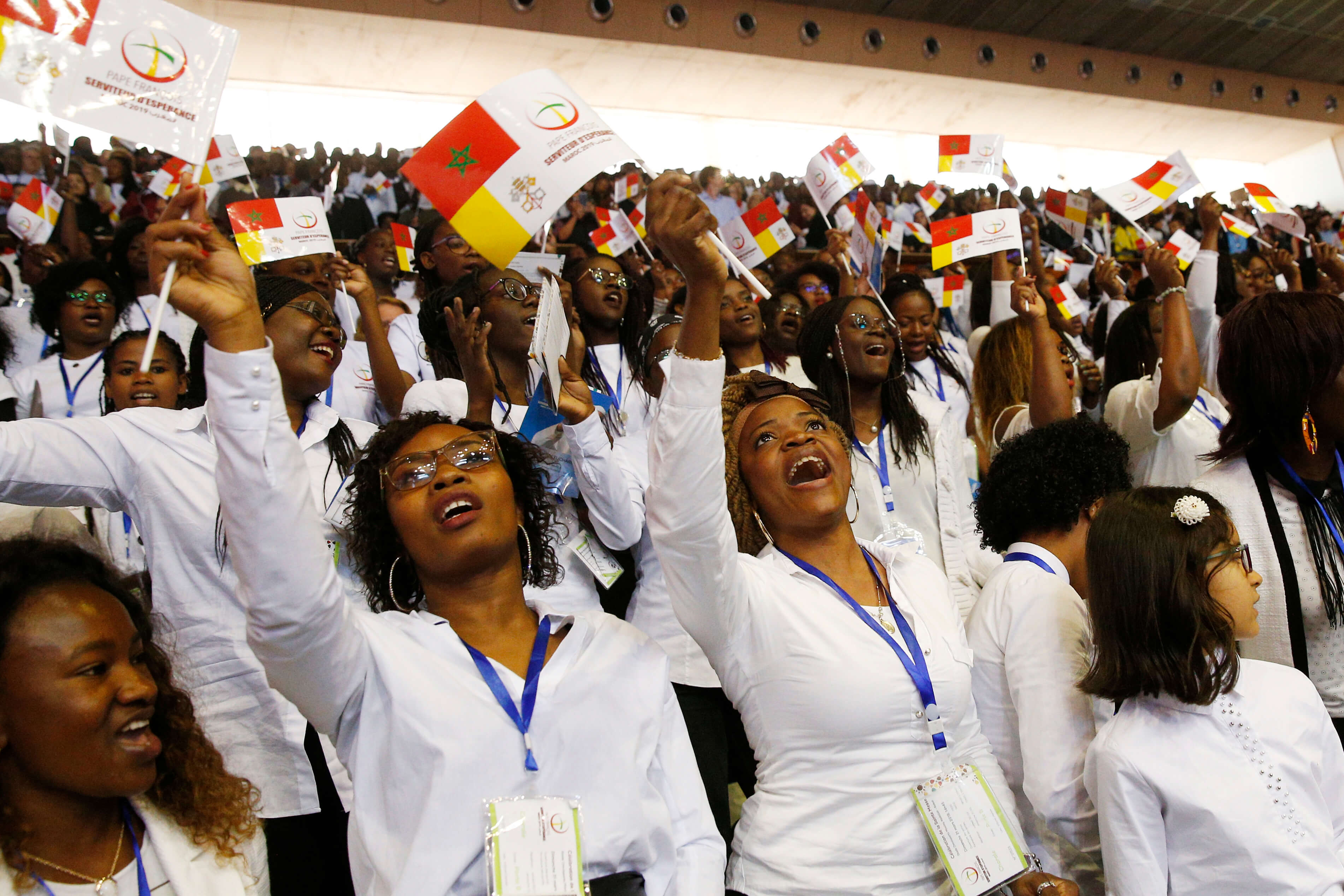 Celebrating Mass with members of Morocco’s tiny Catholic community, Pope Francis praised them for the many ways they “bear witness to the Gospel of mercy in this land.”

At the Mass March 31 in an arena at Rabat’s Prince Moulay Abdellah Stadium, the pope honored the way that Catholics, although much less than 1 percent of the population, reach out to help their Muslim brothers and sisters and the thousands of migrants who pass through, hoping to reach Europe.

“I encourage you to continue to let the culture of mercy grow, a culture in which no one looks at others with indifference, or averts his eyes in the face of their suffering,” he said.

The languages used at the Mass reflected the fact that the Catholic community in Morocco is made up almost entirely of foreigners. The readings were in Spanish, Arabic and French; English, Portuguese and Italian were added for the prayers of the faithful.

More than a dozen Muslim leaders attended the Mass in a sign of friendship and were given seats near the front of the arena.

As is his custom, the pope’s homily at the Mass focused almost entirely on the day’s Gospel reading, which was the story of the prodigal son.

However, Pope Francis put special attention on the elder son in the story, the one who never left home or squandered his inheritance. While the merciful father rejoiced when his younger son returned home, the older son grew angry and refused to join the celebration.

“He prefers isolation to encounter, bitterness to rejoicing,” the pope said. “Not only is he unable to understand or forgive his brother, he cannot accept a father capable of forgiving, willing to wait patiently, to trust and to keep looking, lest anyone be left out — in a word, a father capable of compassion.”

While sad, the elder son’s attitude is not unthinkable or unusual, the pope said. It is the same “tension we experience in our societies and in our communities, and even in our own hearts” when people ask, “Who has the right to stay among us, to take a place at our tables and in our meetings, in our activities and concerns, in our squares and our cities?”

When faced with situations that can bring confrontation, division and strife, he said, “often we are tempted to believe that hatred and revenge are legitimate ways of ensuring quick and effective justice.”

But experience, not to mention faith, “tells us that hatred, division and revenge succeed only in killing our peoples’ soul, poisoning our children’s hopes, and destroying and sweeping away everything we cherish,” the pope said.

The key to acting as a Christian, he said, is to look at situations from the perspective of the father, who loves both his sons and is a representation of God, who created all people to be brothers and sisters.

“Let us not fall into the temptation of reducing the fact that we are his children to a question of rules and regulations, duties and observances,” Pope Francis told the Catholics of Morocco.

Noting that the Gospel story does not say whether, in the end, the elder son reconciled with his brother and joined the party, the pope said each Christian is called to write his or her ending to the story.

“We can complete it by the way we live, the way we regard others and how we treat our neighbor,” he said. “The Christian knows that in the Father’s house there are many rooms: the only ones who remain outside are those who choose not to share in his joy.”