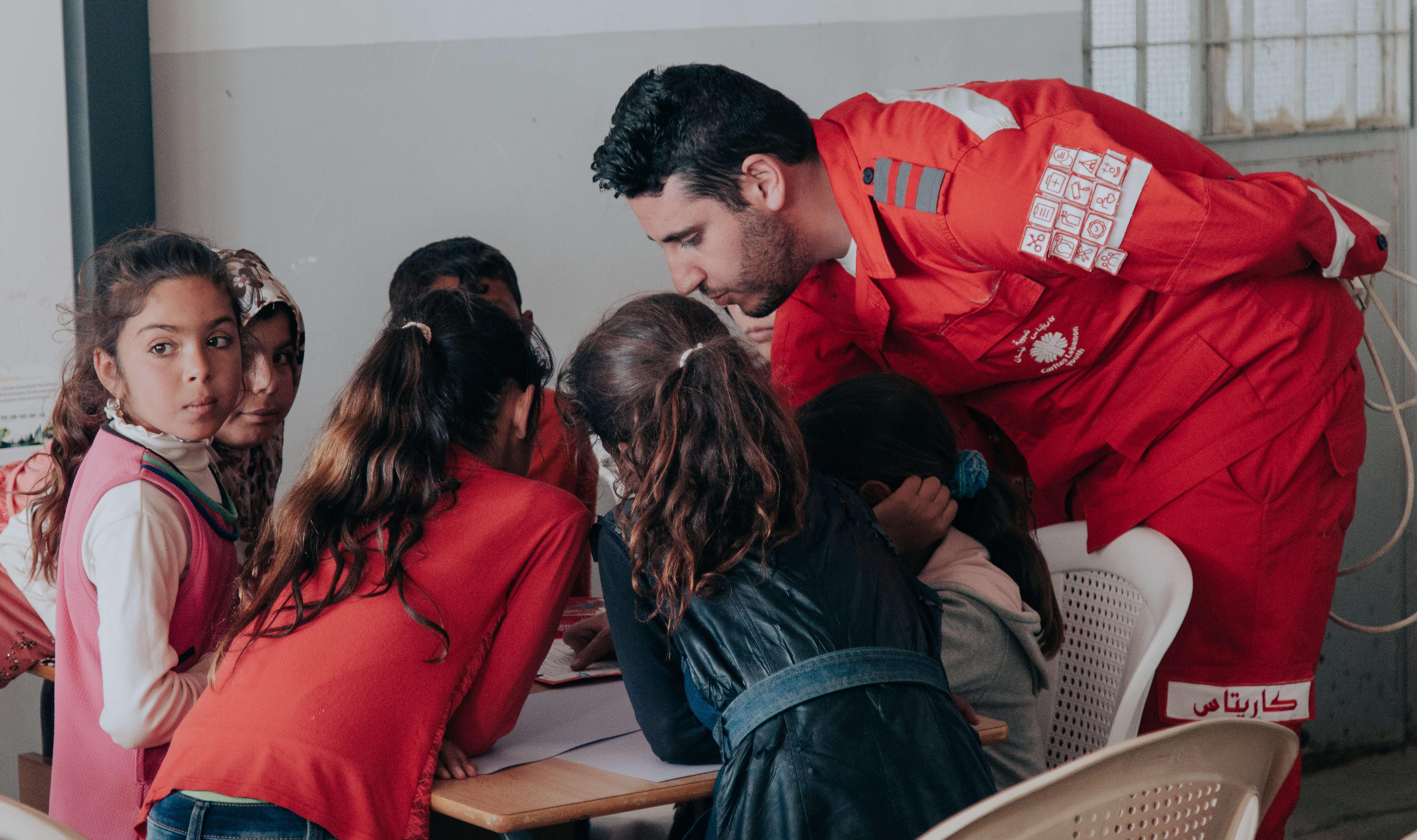 Photo Credit: CNS photo/courtesy Caritas Lebanon - Syrian refugee youth in Lebanon participate in a Caritas Lebanon education program. While procedures are being put in place for Syrians to return to their war-torn country from neighboring Lebanon, the refugee crisis continues to linger and remains largely unchanged, a Caritas Lebanon official said.

While procedures are being put in place for Syrians to return to their war-torn country from neighboring Lebanon, the refugee crisis continues to linger and remains largely unchanged, a Caritas Lebanon official said.

Lebanon hosts more than 1 million Syrian refugees, which is more than a quarter of its population. The tiny country, about two-thirds the size of Connecticut, has the highest number of refugees per capita than any country in the world. More than one-third of Lebanese residents — nearly 36 percent — live in poverty.

In recent months, several hundred Syrians have left Lebanon in organized returns to their homeland, coordinated between authorities in Beirut and Damascus, the Syrian capital. In early August, Lebanon’s General Security Directorate announced that it had opened 17 centers throughout the country that would receive applications for Syrians who want to travel home.

Yet the reality regarding the refugee situation in Lebanon “is still almost the same,” Father Paul Karam, president of Caritas Lebanon, told Catholic News Service. The Catholic aid agency has been involved in the humanitarian crisis for more than seven years. “We are not seeing huge changes yet,” Father Karam said.

What is needed, Father Karam explained, “is to encourage the concerned persons in Syria and in the international community to proceed with a peace process and peace talks and let the Syrians decide for their own future.”

Refugees are making the best of their situation.

Amina, 16, has been living in Lebanon for five years with her parents and five siblings who range in age from 5 to 22.

In Syria, Amina said, the family’s life on the outskirts of Damascus “was comfortable” before the war. Her father owned a food processing business, rental properties and a restaurant. But Amina says all was destroyed in the war, along with their home.

The responsibility of providing for the family of seven has fallen on her two older brothers, who have forfeited their education because neither of her parents has work in Lebanon.

“I want to finish my education. I don’t want to lose my future, like what has happened to my brothers,” Amina told CNS. She said she wants to be a doctor because “I love to help people.”

Amina already has participated in English and French courses at a Caritas-run center in the Bouchrieh neighborhood of Beirut. Her new language skills help in the public school she attends, as schools in Lebanon are tri-lingual: Arabic, French and English.

Currently, Amina is enrolled in a Caritas Lebanon computer class. After a recent session at the Caritas center, Amina noted that she previously didn’t know at all how to use a computer.

“Now I feel more self-confident. I can search for a job, because I am more qualified with computer skills,” she said.

Ideally, she would like a part-time job so she can continue attending classes.

Amina said her family would consider returning to Syria if they are able to make a new life there. Still, education is her biggest priority, whether in Lebanon or in Syria. “I want to finish all my studies,” she told CNS.

Nisrene, 30, a mother of four children ranging from 2 to 8 years old, is one of Amina’s classmates in the computer course. Her family fled to Lebanon six years ago from Idlib, a current flashpoint town in northern Syria.

In addition to the computer course, the Muslim woman also has participated in an English course at the Caritas center.

“I’m doing everything so I can help my children,” Nisrene told CNS. Admitting that she completed her education only up to the sixth grade, she said, “I don’t want the same for my children. I want them to have a good education. I have a goal that if someday my children need help with their studies, I can be the one to help them. I would like to build my children’s confidence.”

If it was safe to return Idlib, Nisrene would prefer to go back to Syria. “I’m not happy about our living situation here,” she said.

Father Karam, the Caritas official, said it is important for the international community to respond to the continuing refugee crisis, “but also to respond after the crisis and especially to deal with the consequences of the crisis.” He said economic assistance and employment are needed along with development projects.

“We wish that peace would reign,” Father Karam said. “People have the right to live in peace, in dignity and in justice.”

The new superintendent of Catholic schools for the Diocese of Burlington plans to weave her [...]