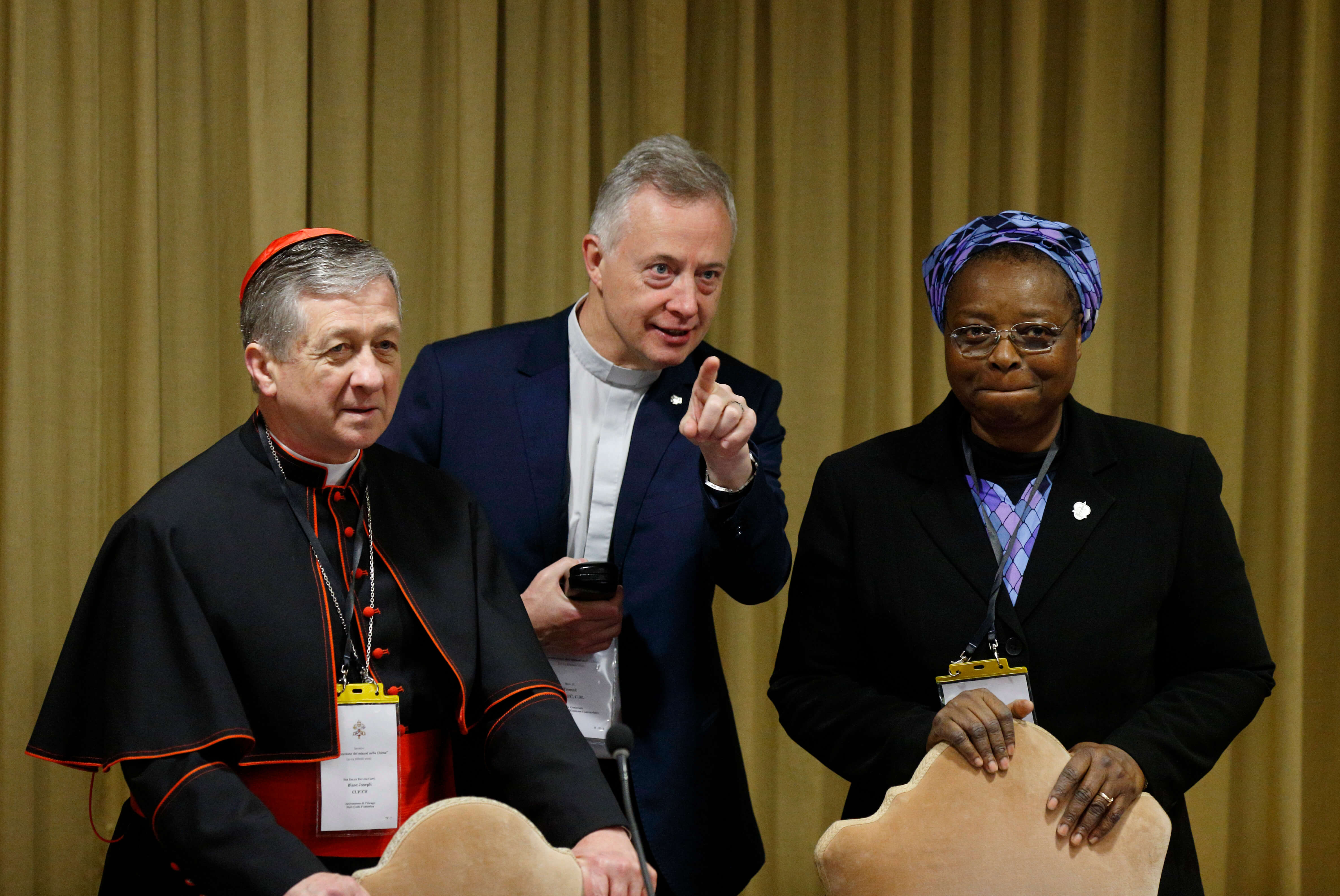 Photo Credit: CNS/Paul Haring - Cardinal Blase J. Cupich of Chicago, Father Tomas Mavric, superior general of the Vincentian order, and Sister Veronica Openibo, congregational leader of the Society of the Holy Child Jesus, attend the a meeting on the protection of minors in the Church at the Vatican Feb. 23.

The clerical sexual abuse crisis has caused “serious scandal” in the Catholic Church and in society “because of the dramatic suffering of the victims, as well as the unjustifiable lack of attention to them” and attempts by Church leaders to cover up the crimes of the guilty, Pope Francis said.

Speaking to the public, including dozens of abuse survivors, after his midday recitation of the Angelus Feb. 24, the pope promised measures to ensure children would be safe in the Church and that the crime of abuse would stop.

The pope’s remarks came just an hour after he concluded the Vatican’s Feb. 21-24 summit on child protection and the clerical abuse scandal.

In his talk concluding the summit, Pope Francis said the Catholic Church would focus on eight priorities: the protection of children; “impeccable seriousness” in dealing with clerical sexual abuse; genuine purification and acknowledgment of past failures; improved training for priests and religious; strengthening and continually reviewing the guidelines of national bishops’ conferences; assisting victims of clerical sexual abuse; working to end the abuse and exploitation of children and young people online; and working with civil authorities to end sex tourism.

The summit brought together Pope Francis and 190 Church leaders — presidents of bishops’ conferences, the heads of the Eastern Catholic churches, superiors of men’s and women’s religious orders and Roman Curia officials — for four days of listening to speeches, survivors’ testimonies, discussions in small groups, a penitential liturgy and Mass.

In addition to the handful of survivors who spoke at the summit itself, dozens of survivors from around the world gathered in Rome in solidarity with one another and to speak to reporters and to individual bishops. Twelve representatives of the survivors were invited to meet Feb. 20 with the summit’s organizing committee.

As the bishops met with the pope inside the Vatican’s synod hall, the coalition Ending Clerical Abuse, which brought 40 survivors from 21 countries to Rome, organized vigils and a march to St. Peter’s Square.

The survivors’ groups were, in general, not satisfied with the summit and insisted the time to talk about the reality of abuse was long passed; it was time for action.

The summit, though, seemed designed more to ensure that every bishops’ conference around the world recognized the gravity of the problem, even if in their country very few cases of clerical sexual abuse had been reported.

Addressing the summit Feb. 23, Nigerian Sister Veronica Openibo, congregational leader of the Society of the Holy Child Jesus, called out bishops, particularly in Asia and Africa, who dismiss the abuse crisis as a Western problem. She cited several personal experiences she confronted while counseling men and women who were abused.

Church leaders cannot think they can “keep silent until the storm has passed,” Sister Openibo told them. “This storm will not pass by.”

Preaching at the closing Mass, Australian Archbishop Mark Coleridge of Brisbane warned his fellow bishops that they would be called to account for what they did and what they failed to do to stop the abuse and assist the victims.

“We have shown too little mercy, and therefore we will receive the same, because the measure we give will be the measure we receive in return,” he said. “We will not go unpunished.”

Cardinal Luis Antonio Tagle of Manila, Philippines, gave the first formal talk of the gathering Feb. 21, providing a theological reflection on the meaning of Christ’s wounds and on the obligation of the world’s bishops to recognize how they have inflicted wounds on Christ’s beloved children.

Touching those wounds and begging for forgiveness is an essential part of a bishop’s mission, he said.

Archbishop Charles Scicluna of Malta, adjunct secretary of the Congregation for the Doctrine of the Faith and longtime investigator of clerical abuse cases, outlined for participants the necessary, mandatory steps they must take when an allegation is made.

He insisted on making the victims a priority, but also used his talk to suggest that the “stewardship of prevention” includes helping the pope choose candidates for bishop appointments.

“Many demand that the process be more open to the input of laypeople in the community,” Archbishop Scicluna said, a request later echoed by Sister Openibo.

When a priest or bishop or layperson is asked to comment on a potential candidate, the archbishop said, “it is a grave sin against the integrity of the episcopal ministry to hide or underestimate facts that may indicate deficits in the lifestyle or spiritual fatherhood” of the candidate.

Later, summit participants debated particular measures, such as a mandatory requirement that abuse allegations be turned over to police. Archbishop Scicluna insisted involving local police and other authorities was important, especially because while bishops exercise spiritual authority over their priests, they have no actual “coercive measures — and we don’t have any nostalgia for the coercive measures of the Inquisition” — to force priests to cooperate with investigations and obey when punishment has been imposed.

Throughout the summit, bishops and other speakers tried to identify attitudes and issues that have contributed to the Catholic Church’s sex abuse crisis; repeatedly they pointed to “clericalism,” and especially an attitude that allows priests and bishops to think that they were somehow special and above the law and common human decency.

Cardinal Daniel N. DiNardo of Galveston-Houston, U.S. Conference of Catholic Bishops president, told Catholic News Service Feb. 24 that it would be up to the full body of bishops to decide how to proceed, but he would not be surprised if they came up with a proposal that would combine a metropolitan-level system with a lay board to assist the metropolitan.

“In our proposals, the work of the laity will be to collaborate,” which is something all the speakers at the summit emphasized, Cardinal DiNardo said. “We want to make sure the laity are involved” in a way that would give them a level of independence to investigated claims against bishops while, at the same time, making it clear the board is acting on behalf of the Church.